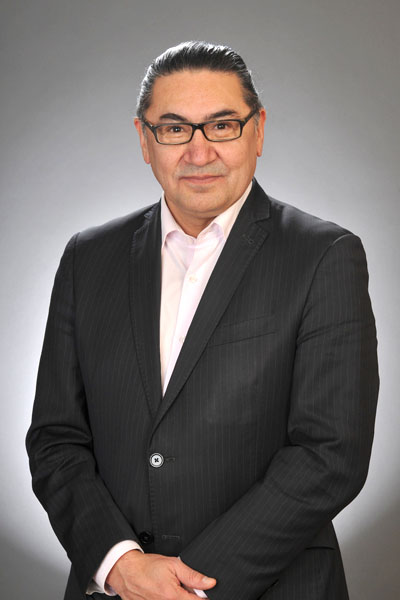 Romeo Saganash, first elected as MP in 2011, hopes to hold onto his seat in Abitibi-James Bay-Nunavik-Eeyou. (HANDOUT PHOTO)

As a former marathon runner, Romeo Saganash knows how to pace himself over long distances.

And it’s a skill that will come in handy during this federal election campaign, which at 78 days, is the longest in Canada since 1876.

But that will also give the incumbent NDP MP more time to visit his massive riding, Abitibi-James Bay-Nunavik-Eeyou, which he won in 2011 with 45 per cent of ballots cast.

When Nunatsiaq News spoke to Saganash in the second week of September, he said he had already clocked 6,000 kilometres in this campaign, with the hope of making it to the riding’s northernmost region — Nunavik — sometime in early October.

Failing that, Saganash says previous visits, and tools like social media, have kept him on top of the issues facing communities across the riding, some of which he calls the most pressing in the country.

“Our needs are so great. We definitely need a government that will make them a priority,” Saganash said in a telephone interview earlier this month.

“I’ve started working on many of them,” he said, naming climate change, housing and the cost of living among them.

“We’ve managed to get these issues debated in the House. But there’s still unfinished business there.”

Saganash, a prominent Cree leader and lawyer who grew up in Waswanipi, has four years as MP under his belt, since he wrested the sprawling riding from the Bloc Québécois in 2011.

Helping the riding’s most vulnerable people is high on the MP’s list of priorities, Saganash said, with a focus on issues that are uniquely northern.

Saganash said he’s proud of the role the NDP played in triggering the Auditor General of Canada’s audit of the Nutrition North Canada program, which last year found that the program did not ensure if northern retailers were passing on the full subsidy.

But that’s not the only federal program that’s irked Nunavimmiut in recent years, he notes.

“[The region’s] housing needs are great,” Saganash said. “It’s a challenging issue because it has so many impacts on quality of life. How can children study in the evening in an overcrowded home? That’s just one small example.”

“The federal government has a constitutional obligation to the Inuit and Cree,” he said, referring to the James Bay and Northern Quebec Agreement, which guarantees housing to its signatories.

“We need to make sure those rights are respected.”

While the Plan Nord is an initiative of the provincial government, Saganash said Ottawa has a major role to play in supporting resource development — and development in general — of Quebec’s northern regions.

“When we compare ourselves to the Russian Arctic, we need to invest in our marine infrastructure,” he said, noting that Quebec Premier Philippe Couillard has written to the federal government, asking for financial support for those projects.

As a Cree leader, Saganash has committed much of his time in the House of Commons to raising Indigenous rights issues — something he says the NDP has been “a step ahead” on.

“I think my leader has been very clear on this, and I think we’ve delivered through action,” he said. “We are for the re-establishment of a nation-to-nation relationship between Indigenous peoples and the government.”

The current government has not taken those issues seriously, Saganash said.

The NDP has managed to get discussion around missing and murdered Indigenous women onto the floor of the House of Commons, he said, despite the Conservative government’s position that it’s an issue best left with police.

“If we do form a government, we will call the national public inquiry into missing and murdered Indigenous women in the first 100 days,” Saganash said. “And I want to be re-elected in this riding to ensure the NDP delivers on this promise.”

Saganash has also advocated for many of the recommendations that came from the Truth and Reconciliation Commission — some before they were even made.

A former residential school student, Saganash knows too well the legacy that schooling system left; the MP took a three-month leave in October 2012 to deal with alcoholism, returning to work in January 2013.

Last year, Saganash sponsored private member’s Bill C-641, which would have seen the United National Declaration on the Rights of Indigenous Peoples enshrined into Canadian law, although it was voted down this past May.

“Again, if elected as government, you can be sure that I’ll bring this back,” he said. “So many Indigenous people were involved in the drafting of this declaration; it took 23 years to achieve.”

This is the final profile of candidates running in Abitibi-James Bay-Nunavik-Eeyou. You can read about the Liberals’ Pierre Dufour here, the Bloc’s Luc Ferland here, and the Conservatives’ Steven Hébert here.