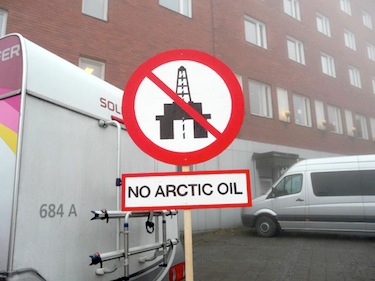 A sign promoting a ban on oil development in the Arctic from Greenpeace in Kiruna, Sweden. (PHOTO COURTESY OF THE INDIGENOUS PEOPLES SECRETARIAT) 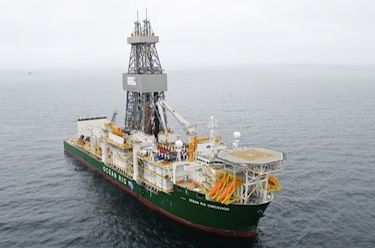 The Ocean Rig Corcovado, located about 180 kilometres offshore Nuuk, drilled down 4,847 metres in 2011. The “Joint Statement of Indigenous Solidarity for Arctic Protection” calls for an end to all offshore drilling in the Arctic. (FILE PHOTO)

As the Arctic Council ministerial meeting gets underway May 15 in Kiruna, Sweden, the Peoples Arctic conference, which looked at oil development and mining in the Arctic, netted 15 new signatories to a joint statement against Arctic oil drilling.

But Canadian Inuit leaders say they don’t support the statement.

“Inuit have not endorsed this statement and position, which appears to be a Greenpeace-orchestrated campaign against resource development in our very own lands and waters,” said Terry Audla, president of Inuit Tapiriit Kanatami, in a May 14 statement.

“I know that the legitimate Inuit claims organizations and leaders across Canada’s Arctic regions do not share this view and we collectively reject Greenpeace’s questionable use of the indigenous voice as a front for its own campaign.”

The “Joint Statement of Indigenous Solidarity for Arctic Protection” was drafted last August at the first Arctic Peoples’ conference, held in Usinsk, Russia.

The statement calls for:

• A ban on all offshore oil drilling in the Arctic shelf — “We cannot accept the ecological risks and destructive impacts of a spill on our lands and in our seas. The irresponsible practices of oil companies everywhere have provided us with more than enough evidence that oil spills in the Arctic seas will be inevitable. At the same time, there are no effective and tested methods to prevent or clean up oil spills in the freezing Arctic seas.”

• A moratorium on onshore oil drilling in the Arctic — “Oil companies have repeatedly shown that they have no respect for anything other than their profits. Until the oil companies and the national governments of the Arctic take the responsibility for the destructive impacts on the environment, the indigenous lands must be closed for them.”

• All extraction and industrialization on Indigenous land “should only be carried out with the explicit consent of the Peoples of the land. Furthermore, Indigenous communities must benefit socially and economically from any industrial extraction. We will not let the Arctic become another industrial area, destroyed to produce profit for the industry.”

“With this declaration, the Indigenous Peoples of the Arctic are sending a very clear signal to the Arctic Council to protect the Arctic against dirty oil business, but instead the Council is using its power to issue a toothless oil spill response agreement that isn’t worth the paper it’s printed on,” said Kumi Naidoo, executive director of Greenpeace International, who attended the conference, which was co-hosted by Greenpeace and the Russian group, Save the Pechora.

May 15 ministers at the Arctic Council meeting will sign an Arctic Marine Oil Pollution Preparedness and Response Agreement, a framework for cooperation to prevent oils spill or responses to oil spills in the Arctic.

“The Arctic Council needs to stop wasting time and resources on useless documents that do nothing to hold government or industry accountable, go back to its initial mandate of Arctic protection and listen to the original inhabitants of this land.”

“This is an example of an external third-party attempting to meddle between Indigenous organizations who are permanent participants of the Arctic Council,” said Duane Smith, president of Inuit Circumpolar Council-Canada.

“This is a blatant act of political disruption against our consensus approach and all of our fellow Indigenous members on the Arctic Council should guard against such influences in order to sustain our process as permanent participants [in the Arctic Council], especially with the issues and challenges that remain ahead of us.

“Inuit leaders across the circumpolar Arctic created and signed off on a comprehensive ‘Circumpolar Inuit Declaration on Resource Development Principles’ two years ago, an Inuit vision which we continue to promote to this day,” Smith added.

“We are the stewards of our own Arctic homeland, we are the negotiators of what takes place in our own back yards, and we will weigh and determine the cost-benefit of development for ourselves as a people. We certainly have no need or appetite to invite environmentalist groups to come to the Arctic and do the work under their logos and on our behalf.”