“We have to support each other: witnesses, family and people speaking for the family” 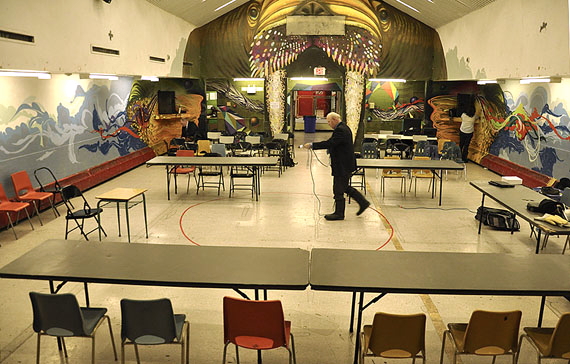 Garth Eggenberger, who is presiding over the coroner’s inquest into the death of Solomon Uyarasuk in police custody in 2012, prepares the community hall in advance of proceedings in Igloolik Nov. 24. (PHOTO BY THOMAS ROHNER)

IGLOOLIK — With jury selection completed, a mandatory coroner’s inquest into the death of Solomon Uyarasuk got underway at the old community hall in Igloolik Nov. 24.

Uyarasuk died Sept. 23, 2012 while in police custody. The jury, comprising three men and three women from the community, are charged with determining the circumstances surrounding the death and making recommendations on how to avoid similar deaths in the future.

Over the next five days, the jury will hear oral testimony and view evidence from a long list of witnesses.

They include RCMP officers on duty at the time, as well as Ottawa Police Service members who did an external investigation following the death, a pathologist who conducted an autopsy, and from some of Uyarasuk’s friends and family members.

“This is a journey we’re all going to go on,” the presiding coroner, Garth Eggenberger from the Northwest Territories, said at the start of proceedings, “and we have to support each other: witnesses, family and people speaking for the family.”

Over 20 people packed into the community hall. Some men preferred to stand behind the rows of chairs set up for the public, while some women, seated, brought infants and children with them.

After jury selection, which was completed by mid-morning, Eggenberger called a half-hour recess.

One woman drinking coffee in the lobby during the break began crying, while another woman put an arm around her, comforting her.

Outside, Uyarasuk’s birth mother, Kanatsiaq, smoked a cigarette, standing apart from the other smokers. Eventually one woman broke away from the group, walked behind Kanatsiaq and put an arm around her.

Uyarasuk’s death has touched a raw nerve in the community because many questions remain unanswered, more than two years after his death, even though many have suspected suicide.

“This is an opportunity for this community to really address issues surrounding his death,” Eggenberger said.

“In the future, when somebody asks how this person died, there’ll be a record of it.”

The inquest is scheduled to last until Nov. 28.