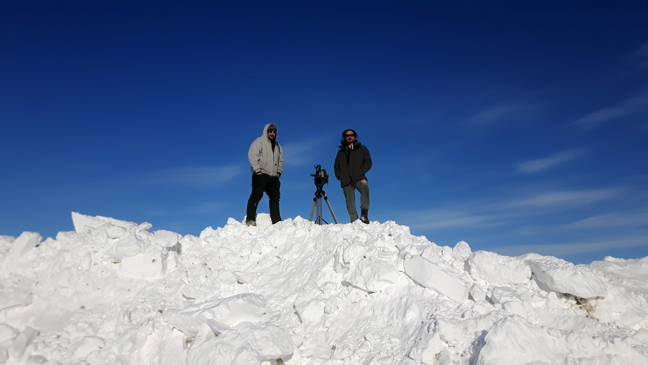 On the set of “Iglu: Angirraq,” a new documentary about homelessness in Iqaluit and Ottawa, by Mosha Folger, right. (PHOTO COURTESY M. FOLGER)

OTTAWA—The first time that Mosha Folger tried his hand at film production years ago was under the apprenticeship of his father, who was also a filmmaker.

This time Folger is working with his sister, Napatsi, and his brother-in-law, while he explores the life of his stepmother. Whether writing poetry, music or film scripts, Folger keeps his projects a family affair. With such a close-knit team, the subject matter is always deeply personal.

Folger’s latest project, Iglu: Angirraq, is a 45-minute documentary on homelessness in both Nunavut and Ottawa, focusing on the story of his stepmother whose experiences first inspired the film.

Although he had a strained relationship with his stepmother for most of his life, Folger knew he had to tell her story when he visited her at the Oaks, a centre in Ottawa with a treatment program.

She had lived on the streets for years before that, panhandling while struggling with substance abuse and addiction.

But even though staying at the centre meant that she was safe and no longer on the streets, that she had three meals a day and didn’t have to panhandle for her alcohol, Folger said seeing her in “a zombie atmosphere” led him to an epiphany.

“It felt very institutional. It didn’t feel like a home,” Folger said. “It felt like a hospital, almost like palliative alcohol care. Like these people are going to die and we’re just giving them booze until that happens.”

Folger said he doesn’t know if it was just his age or if it could be attributed to the passing of time and an altered perspective, but he said seeing her there changed his opinion of her.

He recognized in that moment that even though he was an artist, a writer, a musician, he had overlooked opportunities to learn her story and give her the chance to tell it.

“I wrote articles, I wrote poems,” Folger said. “I wrote songs about homelessness but this person who was my family, who was living in that situation—I had just been ignoring her story. When I had that revelation I was, like, ‘Well now I need to help her to tell her story.’”

And she was keen to help out, he said.

“She wants to help prevent people from falling into the same situation she fell into so she was very excited to be a part of it,” Folger said.

“From there it just exploded into such a big story. There is so much—whether it is government policies—there is just so much to unpack.”

He said knows that since there is a general lack of knowledge throughout Canada about what is going on in Nunavut, films like these can help southerners to understand more clearly the daily realities of Inuit—up North or in urban centres— just to meet their basic needs, like having a home.

“Canada made a promise to Inuit that they took in good faith, about housing and shelter when they moved into communities,” Folger said. “And Canada is not following through on it.”

Folger started working on the film around Christmas of last year after receiving two grants for the project. And although he and his team have filmed the bulk of it, mainly the footage from Nunavut, Folger still has a few interviews left to do in Ottawa before beginning the editing process.

But Iglu: Angirraq should be ready for festivals in early 2018. Festival organizers are also still interested in finding more people who want to share their stories of living on the streets for the documentary.

“I am hopeful that the audience will include people who have the power to change things,” Folger said.