Athletes will ski, showshoe, run and snowboard through nearby Kuuurujuaq park 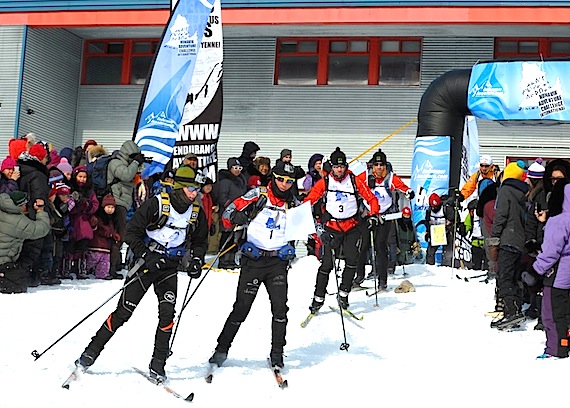 Racers head off from Kangiqsualujjuaq’s Ulluriaq school March 26 on a 150 kilometre multi-sport race through the region’s Kuururjuaq provincial park. (PHOTO BY PASCAL POULIN)

Athletes from South Africa, Italy and France have descended on the Ungava Bay community of Kangiqsualujjuaq this week, looking for the northern adventure of a lifetime.

Kangiqsualujjuaq is hosting the first-ever Nunavik Adventure Challenge International race, which will wind through 150 kilometres of the new Kuururjuaq provincial park.

Event organizers Endurance Aventure are no strangers to Nunavik’s terrain — they’ve been working alongside the Kativik Regional Government and Makivik Corp. to encourage sport among Nunavimmiut youth since 2009.

But this is the organization’s first international event, featuring 50 racers from six different countries, who will ski, showshoe, snowboard and run through one of Nunavik’s second provincial park.

Kuururjuaq covers 4,400 square kilometres, from the Torngat mountains through to the Nunatsiavut border, with the Koroc River as its centrepiece. The park’s new interpretive centre, which opened in February, is located in Kangiqsualujjuaq.

But the main event kicked off March 26, with nine teams departing Kangiqsualujjuaq in the morning for a seven-hour multi-sport race that will take them to an overnight camp spot.

The two-member teams hail from France, the United States, South Africa-United Kingdom, southern Quebec, Ontario as well as three teams from Italy and one – Team Nunavik – made up of local athletes Jobie and David Unatweenuk.

The race continues until March 28. You can track the athletes online at www.nunavikinternationalchallenge.com.