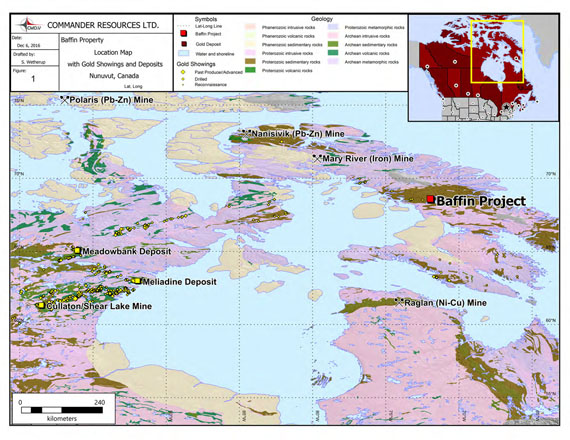 This map, produced by Commander Resources, shows the approximate location of the gold property that Kivalliq Energy has just acquired. (COMMANDER RESOURCES IMAGE)

Kivalliq Energy has yet to do any exploration work at the site. But if the company finds significant gold resources on the property, NTI’s coffers could be enriched by millions of dollars.

That’s because the property covers three parcels of Inuit-owned land for which NTI holds subsurface rights.

Under a mineral exploration agreement with NTI, Kivalliq Energy will gain the exclusive right to explore an IOL land parcel that covers about 72,638 hectares.

And the combined area that Kivalliq Energy acquired from Commander, called the “Baffin Gold Property,” is equal to about 4,090 square kilometres, located near the former Foxe 2 and Dewar Lakes DEW line sites about 230 kilometres southwest of Clyde River.

For more than 10 years, Commander has been using two 1,200 metre airstrips located at the former DEW line sites and has built an exploration camp that Kivalliq Energy will now acquire under the deal.

BHP Billiton and Falconbridge discovered gold there in 2001, and Commander Resources explored the area between 2003 and 2011. A company called AngloGold Ashanti explored it with them between 2009 and 2011, but withdrew from the project.

Kivalliq Energy said in its announcement that under the deal, NTI could, in the future, receive:

• annual advanced royalty payments worth $50,000 after demonstrating a measured resource of one million ounces of gold and the creation of a positive feasibility study; and

• at commercial production, a 12 per cent royalty on net profits with deductions not to exceed 70 per cent of the company’s gross revenues.

Under that 2008 agreement, NTI agreed to receive advance royalty payments and the standard 12 per cent royalty.

And NTI ended up, after 36 months, owning one million shares in Kivalliq Energy.

But the uranium business is circling the drain at the moment. According to Index Mundi, the spot price for uranium stood at only US $22.50 on May 9, down from a high of US $136.22 per pound reached in June 2007.

That low price has already driven Areva Resources out of Baker Lake, where the French multinational has put its office building up for sale. Its highly touted Kiggavik project is now mothballed.

But Kivalliq Energy still brags that Angilak, its “flagship property,” holds Canada’s largest uranium resource outside of Saskatchewan, with more than 2.8 million tonnes of ore containing 43.3 million pounds of U308.

Kivalliq Energy also holds 100 per cent of two uranium properties in Saskatchewan: the Hatchet Lake property northeast of the Athabasca Basin and the Genesis Property, located between Wollaston Lake and the Manitoba border.

“Kivalliq’s team of northern exploration specialists has forged strong relationships with sophisticated resource sector investors and partner Nunavut Tunngavik Inc. on both the Angilak and Baffin Gold Properties,” the company said in its May 8 release.

All the same, Kivalliq Energy’s share price isn’t worth much right now. As of May 9, its shares were trading at CA $0.115 on the TSX.

As of May 9, Commander Resources shares were worth even less: CA $.05.

At the same time, Kivalliq Energy will fulfill Commander’s obligations to NTI during year one of the deal, and acquire data gathered through past exploration activities.

At the start of commercial production on the Baffin Gold Property, Commander will get a cash payment of up to $6 million and some royalties.

The royalties due to Commander include a .25 per cent to .5 per cent net smelter royalty, and a .25 per cent royalty on Kivalliq Energy’s Baffin mineral properties adjacent to the Baffin Gold Property.

NTI has not yet announced the Baffin Gold Property deal to its beneficiaries.