“Make no mistake, Canada’s footprint in the Arctic is the Inuit footprint” 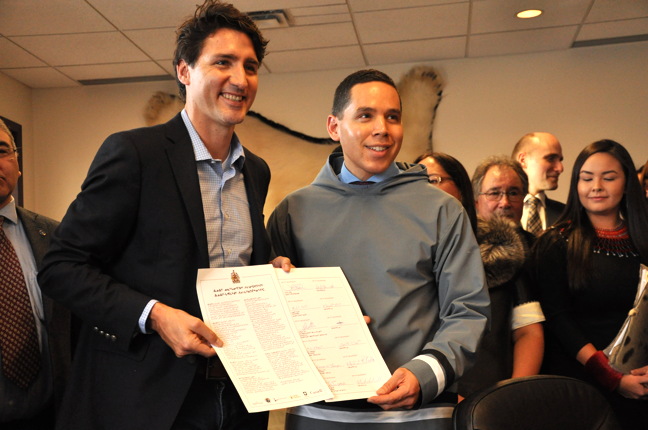 My favorite writer, Stephen King, has an acronym for the expression “same old:” SSDD, “same stuff, different day.” Only he doesn’t use the word stuff, but it is a term he likes to use as shorthand.

I think if Stephen King were monitoring what’s been going on in Canada lately, he would likely categorize many things by putting events in his SSDD column.

It might be hard to argue with that conclusion, given what we witnessed in Iqaluit, Nunavut on Feb. 9, 2017.

With great fanfare, Prime Minister Justin Trudeau and company, while doing their best to draw Canadians’ attention away from the Liberals’ broken promise on electoral reform, flew into the northern capital and boom—you guessed it—formed a committee.

They even reached a “consensus” on the notion of a committee such that they could announce this “Declaration.”

A committee of northern leaders that will “collaboratively identify and take action on shared priorities and monitor progress going forward.”

Wow, I thought rather sarcastically, now this is highly original and ground breaking! I believe I read that script somewhere before though.

Let me think back. Yes, just about every leader since Lester Pearson have said something similar. And where is the North today in the grand scheme of things that we know as the social and economic fabric of modern day Canada?

In recent months and years, the word “trillion” has entered the dictionary of Canadian English. We are most accustomed to measuring our deficits or our liquid assets in billions, but according to some of the government’s own estimates, there are predictions that deficits will hit the trillion and a half dollar mark by 2045.

Canada’s gross domestic product for 2016 is estimated to be in the range of $1.6 trillion. That is, if you threw the value of all public and private production into one barrel, the total would be in the $1.6 trillion dollar range.

Some research shows that good old capitalism has allowed a handful of people in Canada to control a disproportionate amount of that wealth.

What I fail to understand—and let me put this in perspective—this is coming from one who has not yet seen his net worth hit six figures, let alone seven or eight—is how it can be that so much wealth can be concentrated in the hands of so few, while so many of our original people continue to live in poverty with little hope for a prosperous future.

But let me get back to Canada North of 60, where people experience food insecurity, and where people have been known to scrounge around community dumps to find food, because what is in the community store is simply too expensive and beyond their means.

A committee that will collaboratively identify, take action and monitor progress is desperately vague and difficult to measure. Maybe that is how the bureaucrats intended it.

But I think while all this fluffy language might play well for sound bites, the initiative lacks substance and misses the boat completely. I am disappointed that our Inuit leaders allowed themselves to be sucked into this as though it were the Second Coming.

As one who grew up being aware of tensions caused by the Cold War and in the general vicinity of a huge American air force base, it is instructive to remember the build up of Soviet nuclear missiles in Cuba in 1962 during the nuclear arms race. Nuclear warheads designed for offensive purposes were placed in Cuba and pointed at cities in North America. The world teetered on the edge. But at a moment before doomsday reasonable people worked matters out, and humanity can only be thankful that there wasn’t a gunslinger like Donald Trump in the White House then.

But what worries me today is the methodical advances being made by Russia in its claim to sovereignty in the Arctic, an area that holds a large portion of the world’s oil and gas reserves. Right now as we speak, Russia is constructing military bases inside the Arctic Circle and claims to have even planted a Russian flag under the ice at the North Pole.

The Russians mean business and President Putin lets nothing stand in his way. And now with his friend and “ally” in the White House and with the world’s ever-insatiable appetite for oil, Canada’s north will be under intense scrutiny and it will be “cooperate or get out of the way.”

My question then is, yes, while Canada and the Inuit have shared goals, what is this new partnership that was announced on Feb. 9 going to do to ensure Canada maintains its sovereignty in the Arctic? How will the government ensure that Inuit are treated equally in the protection of the Arctic environment?

While it is nice to find the remnants of the Franklin expedition, and while the Arctic research station in Cambridge Bay is a step in the right direction, our leaders need to step back and look at the bigger picture.

Are we going to allow an aggressive Russian dictator to invade our homeland and steal our undersea reserves of oil and gas? And in the process of asserting sovereignty Canada has to make sure that the economic benefits that arise therefrom flow back to Inuit communities.

The international issues at play here are all linked, climate change, environment, resource extraction, and international relations, these are all such that we cannot afford to be a bystander.

In short we need to assert ourselves, stand up and be counted! Make no mistake Canada’s footprint in the Arctic is the Inuit footprint.

Our leaders therefore need to put meaning behind that most treasured description of ours, that yes we are the “true north strong and free.”

William Flowers is a Nunatsiavut beneficiary and a retired civil servant living in Amherst, Nova Scotia