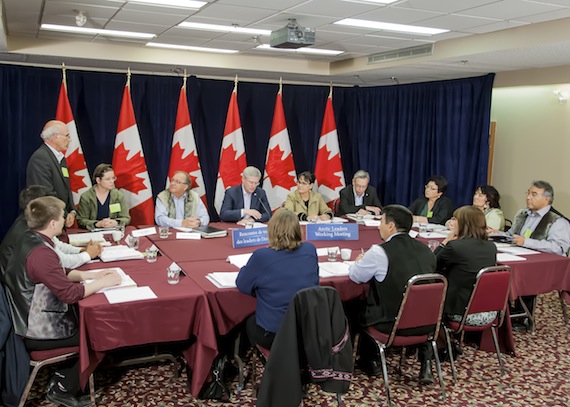 Members of the board of Inuit Tapiriit Kanatami gets ready to discuss issues such as housing Aug. 22 in Rankin Inlet with Prime Minister Stephen Harper and other federal officials during the “Arctic leaders working meeting.” (PHOTO BY DOUG MCCLARTY/ ARCTEC DESIGN AND SERVICES)

Inuit leaders from across Canada discussed new goals for “the evolving Inuit-federal partnership” with Prime Minister Stephen Harper and members of his cabinet Aud. 22 in Rankin Inlet, during what a news release from Inuit Tapiriit Kanatami called the “first ever” meeting between Inuit leaders and representatives of the Crown.

“This historic meeting was a step in the direction of a new relationship between Inuit and the federal government,” said ITK president Terry Audla in the release, sent out after 10 p.m. Aug. 22.

“We are partners in the implementation of our land claims agreements and we are united in our goals for economic prosperity in Inuit Nunangat.”

Among other issues, they talked about the inclusion of Nunavik and Nunatsiavut in Arctic policy making because these two regions are often left out of federal programs, specifically designed for the North, due to jurisdictional issues, ITK said.

They also talked about the need for a national Inuit housing program, which would address the critical need for housing, and develop a private home ownership program to help Inuit transition out of social housing and build a private real estate market.

Mary Simon, the former president of ITK, first said in January 2012 that Inuit needed to talk with the PM “about some of the critical issues facing Inuit today.”

Some of the issues Simon wanted on the agenda included education in Inuit regions, as well as mental health services — which were not mentioned in the Aug. 22 news release.

Both are issues that Simon said prevent Inuit from taking part fully in the work force.

ITK’s ultimate goal at that time was to host a northern meeting with Inuit leaders, the PM, cabinet ministers and premiers of the Inuit-inhabited territories and provinces, all at the same table.

Also on Aug. 22, Nunavut Premier Eva Aariak met one-on-one with Harper. During their meeting she said they discussed “Nunavut’s priorities,” which included devolution and improved infrastructure.

Harper was scheduled to leave Rankin Inlet Aug. 23 to visit the Raglan nickel mine in Nunavik.