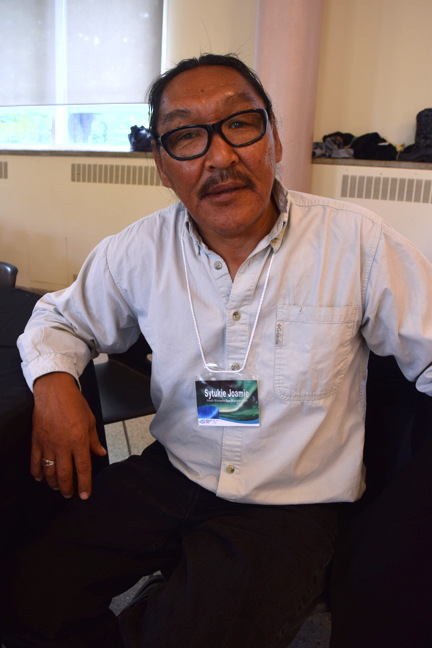 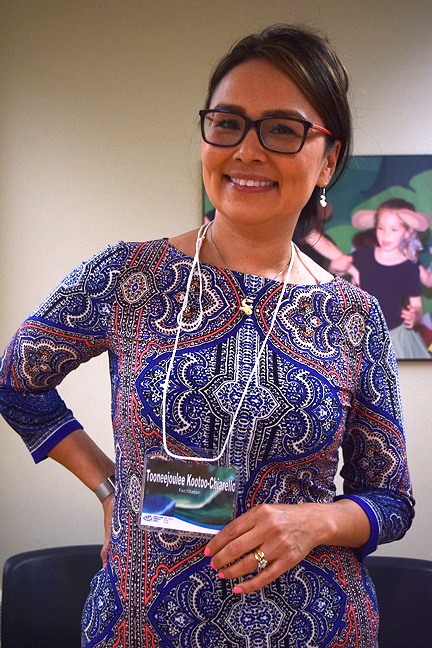 OTTAWA — It was almost 53 years ago that Sytukie Joamie, now an Inuit traditional knowledge researcher, sat in his first kindergarten classroom in Niaqunnguu and was told by his teachers not to speak his language.

He’s been living in Ottawa almost two years now and he says that it took him about a year to adjust to southern life.

Although he says there are many differences between the city and his northern birthplace — mainly the weather, the people and the environment — he says he hasn’t experienced culture shock. It’s just different, he said.

He can still recite the disc numbers on his ujamiit or Eskimo ID tag.

Today Joamie is sitting in a conference filled with 100 educators and service providers who have asked him to share his language and culture with a roomful of educators and professionals in a setting very much like a classroom – only they are the students and he is the teacher.

The Ottawa Inuit Children’s Centre hosted The Inuit Way: Seeing The Light, a symposium that gathered 100 professionals, including front-line service workers, educators, and adoptive and foster families for a day spent learning about traditional Inuit culture to help them understand, and better serve, members of the Inuit community.

With workshops ranging from language and communication, throat singing, traditional knowledge, Inuit in the South, and historical trauma, there was plenty to learn.

In the workshop on communication, Tooneejoulee Kootoo-Chiarello, the OICC Inuktitut instructor and board member of Ottawa Children’s Aid Society, covered the importance of non-verbal language in Inuit culture.

“We never used ‘hello’ in our society,” said Kootoo-Chiarello. “We just acknowledged their presence. But we are a culture that adapts very well.”

In fact, because speaking a greeting was so new to Inuit, it inspired a nickname for non-Inuit anglophones. Haluuraaluk means “the big hellos,” Kootoo-Chiarello said.

Attendees learned that the eyes and nose, facial gestures and postures too, can speak volumes: scrunching up a nose for no, raising the eyebrows for yes.

She says southern teachers and adults unfamiliar with Inuit culture sometimes think a child is being rude or unresponsive when they are actually using physical instead of verbal language.

“Quiet and humble is our nature,” she said. “We’re there to respect their face.”

She wanted people to know that if someone is quiet in your presence it doesn’t mean they’re not interested in the dialogue.

“Silence is okay,” Kootoo-Chiarello said. “We need to learn to respect each other’s silences.”

She explained that Inuit are very touchy. A two-handed handshake shows you are genuinely happy to be in their presence.

“And we don’t point,” said Dion Metcalfe, the Bridging the Gap Student Support presenter at the OICC and a popular cultural speaker since 2007. “It can be rude. We use our chin to point.”

He also taught the attendees that Inuit have no swear words.

“But you can always tell when a mom is mad by her tone and facial expressions,” he said. Metcalfe demonstrated an angry mom tone to laughter from the room.

“We are a culture that loves to laugh,” Kootoo-Chiarello said, reminding us that in fact the whole point of throat singing is the laughter at the end.

One of the last elements of Inuit communication presented was the time it takes to respond.

Asking a single question at a time is imperative to front-line workers and educators, to allow the person time enough to answer.

“A lot of thought goes into the words we say before we say them,” Metcalfe said.

In a city like Ottawa, Kootoo-Chiarello believes people answer too quickly.

“When someone asks, ‘How are you?’ the answer is always so fast,” she said. “’Good, thanks, you?’ But why not take more time, take a step back, really think about how you’re feeling and what your answer is.”

Just after the lunch — which included a big pot of caribou soup, giving many the chance to share their bones with Ina Zakal, an elder who is involved with the OICC’s Uqausivut language program — throat singers Kathy Kettler and Kendra Tagoona performed.

They sang several traditional songs, such as the River Song, the Wind Song and the Dog and Wolf, which brought more joy and laughter to the room.

Lynda Brown, president of the Inuit Non-Profit Housing Corp. and director of youth programs at OICC, who led the workshop on Inuit in the South, spoke about issues facing Inuit in the North that often lead them to move to Ottawa: food scarcity and high food prices; better and more employment opportunities; options for higher education; medical and dental services; or just to be near family.

Doctors and dentists fly in only once every three to six months. With the high rates of cancer and tuberculosis in the North, some Inuit who move to Ottawa really have no option if they require specialized medical care.

Brown said many Inuit in Ottawa continue to be confused by the southern bureaucracy, hampered by language barriers and still troubled by the remnants of traumatic events such as forced relocations, medical ships, residential schools and the sled-dog slaughter.

“Inuit Tapiriit Kanatami put it best when they said the Inuit went from igloos to iPods in just a few years,” Brown said.

Since children occupy the centre of the Inuit community, the OICC exists to support families in the city, she said. Respect for the land is an important aspect of the culture, so staff try to bring that into an urban setting through field trips into nature and exposing children to traditional activities such as carving up and eating a seal during March break.

To Joamie, teaching the public about traditional culture at events like this is essential. It was a like coming full circle for him, and maybe it can be the same for his community.

“There’s a lot of Inuit youth that come to southern cities,” he said. “A lot of children come and people need to learn how to meet their needs, to familiarize themselves with the ways to give service to the Inuit children as well as they can.”