“Things are going to resume as quickly as possible” 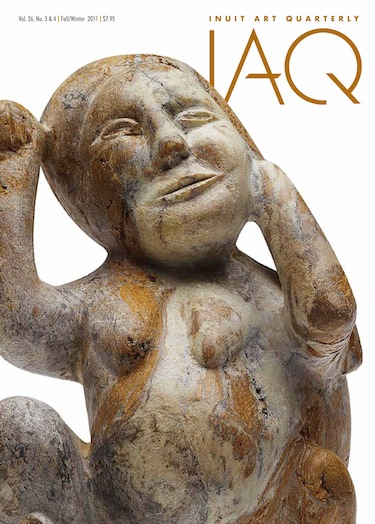 The last edition of the Inuit Art Quarterly will not be its final edition, according to plans underway at the Inuit Art Foundation.

After abruptly shutting down this past March, the Inuit Art Foundation established a new, rejuvenated board during a meeting in Iqaluit, IAF chair Barry Appleton said Dec. 5.

The foundation, which for 27 years supported Inuit art and artists through its Ottawa shop and the Inuit Art Quarterly magazine, folded after it received a mixed review from the federal government.

This review recommended that the department of Aboriginal Affairs and Northern Development take a second look at the foundation, which received a $458,000 yearly grant from the department. The money accounted for 40 to 45 per cent of the IAF’s annual revenues.

But many letters of support from the North and South have turned the situation around, said Appleton, who has collected Inuit art for over 30 years.

“People [are] saying that they really want the Inuit Art Foundation to continue on to support Inuit artists and Inuit art and to also revive the Inuit Art Quarterly magazine, which is the only scholarly magazine in the world devoted entirely to Inuit art,” he said.

Some of the previous board members stayed on, while others dropped off.

“[But] it’s a very impressive board with senior well-known respected artists,” Appleton said.

A vast majority of the board are Inuit artists and “people connected entirely with the Inuit art community.”

All board members have a long-standing connection to Inuit art, Appleton added.

“We have a lot of work to do but in true Inuit fashion everyone worked together and found a consensus today and we think that’s going to be very important,” he said.

Now, applications have been made to John Duncan, minister of Aboriginal Affairs and Northern Development, to request funding to allow the foundation to continue, with Nunavut MP Leona Aglukkaq copied on the application, Appleton said.

When board members decided in March they were going to close up, “it was quite a substantial operation to be able to get the board to reconsider their options, then to be able to go and proceed to make applications to the federal government for funding,” he said.

The IAF had no current funding because they hadn’t made an application.

However, the foundation is starting the process of bringing back the Inuit Art Quarterly.

“We were so upset when the Inuit Art Quarterly was gone we had to do something to try to help,” Appleton said.

“I had messages from Kenojuak Ashevak, who’s probably the most elder of the Canadian Inuit artists in Cape Dorset, asking us to take steps to preserve the magazine to help younger generations know about Inuit art and to help collectors know more about Inuit art,” he said.

The magazine helps improve prices for the producers of Inuit art, helps market Inuit art on a global basis and helps put the important and academic nature of Inuit art to galleries and museums.

“Without having that there was nothing that could make that information available,” Appleton said.

But the foundation’s closing in March had more to do with a worry that people weren’t as interested in Inuit art than it had to do with money.

The money was available, but “it was that the directors decided that people weren’t as interested,” Appleton said, adding that a popular swell of interest brought people together to show community commitment to the IAF.

Appleton said the IAF is delighted it can continue.

“The members of the board are very excited about this, because those directors that had voted to close the foundation really did so reluctantly and now because of all the support they’ve seen from around the world, they really want to be in a position to resume operations and we’ll be doing that immediately.”

In addition to working on a new magazine, which is due to appear in the spring, the IAF has also launched a new website.

Appleton said “things are going to resume as quickly as possible because it’s really important that the Inuit Art Foundation not lose its momentum to be able to support Inuit arts and Inuit artists.”

The next step now is to wait for the response from the federal government, he said.