Inuit must consent to UN Law of the Sea treaty: ICC 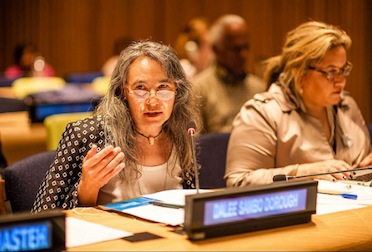 Dalee Sambo Dorough who sits on the Inuit Circumpolar Council advisory committee on UN Issues presents May 30 at the UN Permanent Forum on Indigenous Issues. (PHOTO BY BRODDI SIGURDARSON, UN)

Inuit and other Arctic indigenous peoples need to be more involved in the United Nations Law of the Sea negotiations.

That was the message that Inupiaq academic and indigenous rights expert Dalee Sambo Dorough, also on the Inuit Circumpolar Council advisory committee on UN Issues, presented May 30 at the UN Permanent Forum on Indigenous Issues.

Under UNCLOS, nations with Arctic Ocean coastlines — like Canada, Russia, the United States, Denmark and Norway — can claim offshore territory beyond the 200-nautical-mile limit if they can prove by 2013 that underwater geology shows the seabed is actually an extension of their land base, the continental shelf.

At stake is control over potentially huge oil, natural gas, and mineral reserves that scientists believe lie under polar waters.

“As an Inuk, I am concerned about the process of the UNCLOS and the lack of representation of indigenous peoples within the regulatory and decision making institutions of this important treaty,” Dorough said. “As indigenous peoples, at minimum, Inuit need a mechanism to ensure that our rights are included in these crucial processes to delimit territory and that the right of indigenous peoples, including Inuit, to free, prior and informed consent be recognized and respected.”

More than 2,000 indigenous people from around the world gathered in New York City for twelfth session of the UN Permanent Forum on Indigenous Issues, May 20 to May 31 at the UN headquarters.

Dorough also slammed the lack of consultation with Inuit on the upcoming submission to UNCLOS.

“No state should be able to use the UNCLOS regime and treaty provisions to claim portions or territory of the Arctic Ocean and seabed that Inuit occupy and have rights to unless Inuit are engaged and ultimately consent,” she said.

Senator Charlie Watt, who has been working on this file with Dorough, said “once again Inuit are at the forefront pressuring the international community to recognize the rights of indigenous peoples.”

“We can be proud of our leaders who go against the current of popular opinion and continue to fight on behalf of our people,” Watt said in a statement to Nunatsiaq News.

Watt said he continues to pressure Ottawa about Canada’s submission to the UNCLOS and “the lack of consultation between the federal government and Inuit on their Arctic territory.”