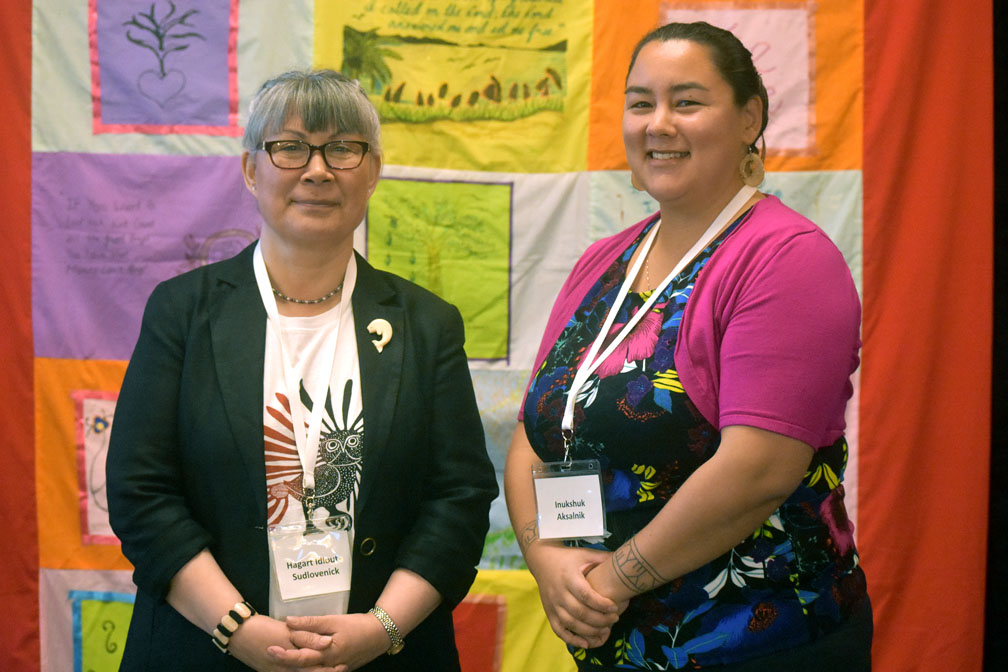 Hagar Idlout-Sudlovenick and Inukshuk Aksalnik of the Qikiqtani Inuit Association gave evidence at a hearing held by the National Inquiry into Missing and Murdered Indigenous Women and Girls in Iqaluit this week. QIA called on the RCMP to acknowledge its role in historical injustices to Inuit, including allegations that members slaughtered sled dogs and forced sexual favours from Inuit women. (PHOTO BY COURTNEY EDGAR)

In traditional Inuit society, sometimes couples would share domestic life with friends, Inuit witnesses told the National Inquiry into Missing and Murdered Indigenous Women and Girls in Iqaluit this week.

When a man was away on a hunting trip, he might ask a friend to take care of his wife, romantically, sexually, emotionally, as a means of survival. There would be an agreement between all parties, the witnesses said.

But when non-Inuit RCMP members arrived in the North in the 1950s, they may have seen these arrangements and assumed they did not have to ask for the consent of Inuit women.

“In this situation it was different, particularly because of the power imbalance,” Inukshuk Aksalnik, the Qikiqtani Truth Commission coordinator with the Qikiqtani Inuit Association, told commissioners on Tuesday morning.

The theme of this week’s hearings at the Frobisher Inn is the socio-economic, health and wellness impacts of colonial violence.

The RCMP has never properly acknowledged the historical violence perpetrated by its members in what is now Nunavut, Aksalnik said.

“The force has never looked into its history in a comprehensive way,” she said. “It has not tried to understand why Indigenous peoples in particular are exhausted by the RCMP’s repeated promises to do better. Many scholars and consultants have produced valuable studies, but the RCMP itself has not done the work.”

She continued to say that the QIA “would respectfully request that the inquiry into MMIWG consider asking the RCMP to examine the history of the force’s actions with Indigenous women and girls in collaboration with Indigenous scholars.”

“We would also ask that it be done quickly, before more records and more memories are lost,” Aksalnik said.

They also heard about the social issues that followed these alleged acts.

Hagar Idlout-Sudlovenick, the QIA’s director of social policy, also said the RCMP routinely slaughtered sled dogs, and that this contributed to Inuit becoming dependent on the federal government.

“Without a means to hunt, Inuit also became dependent on inadequate social assistance payments, store-bought food that was nutritionally poor and void of cultural meaning,” she said.

As well, for Inuit, a man’s sense of masculinity was directly related to the amount and health of sled dogs he raised, said Idlout-Sudlovenick.

On Tuesday morning, the commissioners heard allegations that RCMP officers impregnated Inuit women while their Inuit husbands were on hunting trips.

They also heard allegations of forced sexual favours and of young men taking advantage of their position of authority.

One account shared at the hearing on Tuesday was of a girl who said, “I have an RCMP father. I am different from my sister. I am an illegitimate child and it’s embarrassing. When I started getting older I was very agitated by it.”

The Inuit who spoke to the truth commission had said that that they believed the government and the RCMP were aware of some of these acts of violence.

Aksalnik said the truth commission does not believe there was a deliberate conspiracy.

However, she said that the policies and culture of the federal government and the RCMP harmed Inuit communities, leaving long-lasting intergenerational trauma in its wake.

Aksalnik said the truth commission’s archival research includes numerous instances that show the government was told about this violence.

“In 1959, RCMP officer Van Norman, who appears to be one of the most sensitive and helpful members in that time period, spoke about what he saw as the sexual and emotional exploitation of Inuit women by Distant Early Warning Line employees,” Aksalnik said.

The DEW line was a string of continental defence radar stations that ran from Alaska, across the north of Canada, to Greenland.

In a 1958 letter the truth commission shared at Monday’s hearing, an anonymous worker wrote to the minister of northern affairs, alleging that the station chief at Fox 3 DEW line station—at Dewar Lakes in central Baffin Island—used his authority to sexually exploit Inuit women.

The truth commission could not determine if any action was taken in either instance.

Since 2010, the QIA has been waiting for an acknowledgement and an apology from the Government of Canada.

And the police were the muscle behind the power of the federal government, Aksalnik said. These past wrongdoings have strained the relationship between Inuit and the force ever since, she said.

One of the recommendations flowing from the truth commission’s report is that the Government of Canada formally acknowledge that the levels of suicide, addiction, incarceration and social dysfunction found in the territory are symptoms of intergenerational trauma from historical government policies.

“The RCMP did not bring justice to the North, it was already there,” Idlout-Sudlovenick said.

Correction: An earlier version of this story said the truth commission heard reports of almost 350 allegations of sexual abuse. In fact, that was the total number of witnesses that the commission heard from.