Inuit Studies conference “the best one yet,” say attendees 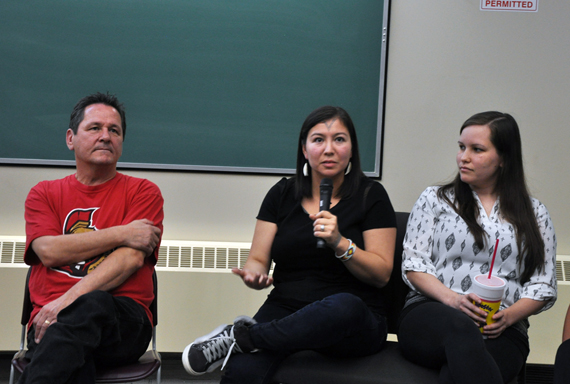 Inuit photographers/filmmakers Barry Pottle, Alethea Arnaquq-Baril and Jennie Williams talk about the challenges they face in their work. (PHOTO BY SARAH ROGERS) 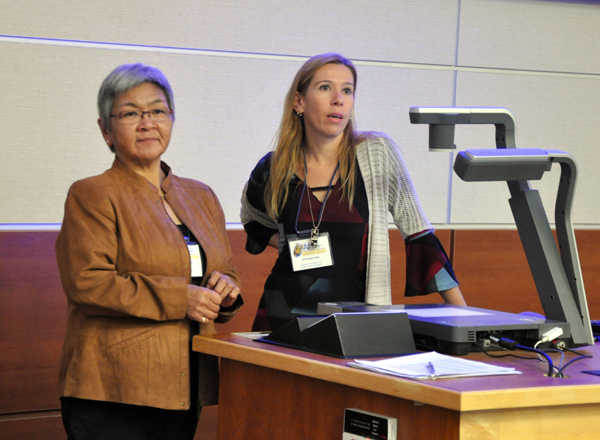 Researchers Elisapi Uitangak and Veronique Paul share results of their research into how the education system developed in the Nunavik communities of Puvirnituq & Ivujivik between 1939-1990, two communities that had not originally signed onto the James Bay and Northern Quebec Agreement. (PHOTO BY SARAH ROGERS)

ST. JOHN’S—With 200 presenters giving talks spanning four days, you can’t possibly take it all in at once.

While Pamela Gross is giving a presentation on land-based camps in Nunavut’s Kitikmeot region, across the Memorial University campus, another group is talking about Inuit-led environmental and health monitoring in the Nunatsiavut region.

Down the hall, another researcher discusses early Inuktitut language development among Greenlandic children.

This year’s Inuit Studies Conference, hosted Oct. 8 to Oct. 10 in St. John’s, Newfoundland and Labrador, drew the conference’s second-largest attendance in its 40-year history, with more than 400 delegates. The only other conference that drew more was its 2012 event, hosted at the Smithsonian Institution in Washington, D.C.

Perhaps not the largest, but “the best one yet,” said National Inuit Youth Council president Maatalii Okalik in the keynote address she gave at the conference Oct. 10.

“I’ve never seen so many Inuit,” she said. “It’s very clear, that when Inuit are equal partners in the process, the outcome is amazing.”

The conversation and debate wasn’t limited to the conference’s sessions. In the hallway, a trio of young Inuit women are overheard discussing Inuit culture and fashion: Who should have access to it?

One woman argues that her grandmother’s parka pattern should be available for anyone to copy and use; her friend counters that the pattern is meant to be passed down within her own family.

“The most exciting thing here is the conversations happening in the hallways,” said Ossie Michelin, a spokesperson for this year’s conference.

The goal of the 20th biennial conference, titled Inuit Traditions, he described in a single phrase: Inuit inclusive.

Inuit Tapiriit Kanatami President Natan Obed attended his first Inuit Studies Conference this year, only because he saw that Inuit themselves were a force behind the 2016 program. Obed also gave one of the event’s keynote addresses.

“I haven’t been to an Inuit studies conference before, largely because I haven’t seen the relevance in the representational aspect of the work,” he said in a July interview.

This year’s conference was also framed by an arts and cultural showcase, including several visual arts exhibit, music, demonstrations and a nighttime arts crawl through downtown St. John’s.

Twenty years ago, when Inuit Studies was hosted in the same city, the conference faced heavy criticism from Inuit participants, who challenged the right of non-Inuit researchers to work on intimate topics like shamanism or the sled dog slaughter.

In that sense, the event has come a long way. But with Inuit making up about 40 per cent of this year’s conference, there’s still some room to grow.

Organizers haven’t yet decided where the 2018 conference will take place, although they’ve discussed bringing the event to a city along the west coast.