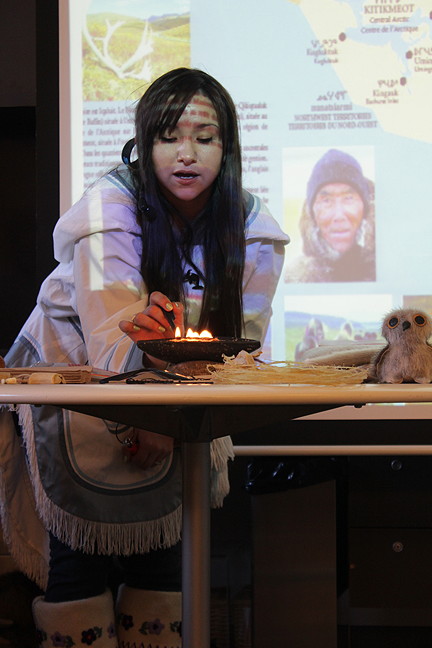 Allison Zakal, coordinator for the Ottawa Inuit Children Centre’s High School Bridging the Gap program, demonstrates to some Grade 3 students in Ottawa how to light the qulliq during the Canadian Museum of Nature’s Edible Arctic festival April 3. (PHOTO BY LISA GREGOIRE) 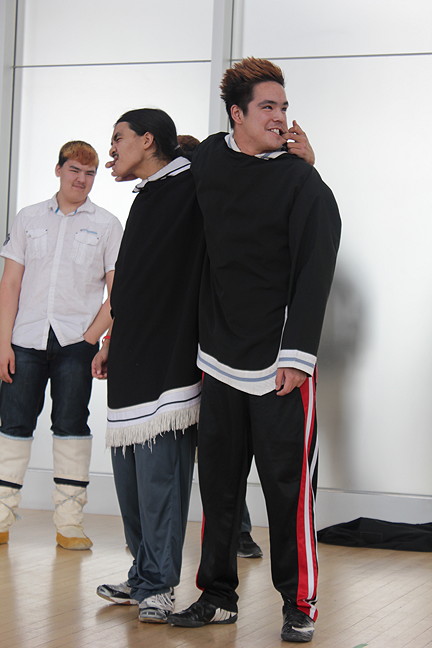 Jesse Tuluraqjuk, right, and Ipellie Ootoova, try their best to withstand the pain of the face pull game for the benefit of some Grade 3 students at the Canadian Museum of Nature April 3. The two Nunavut Sivuniksavut students, along with George Sallerina, background, and Michael Milton, not pictured, were part of the museum’s annual Arctic festival, this year called Edible Arctic. (PHOTO BY LISA GREGOIRE) 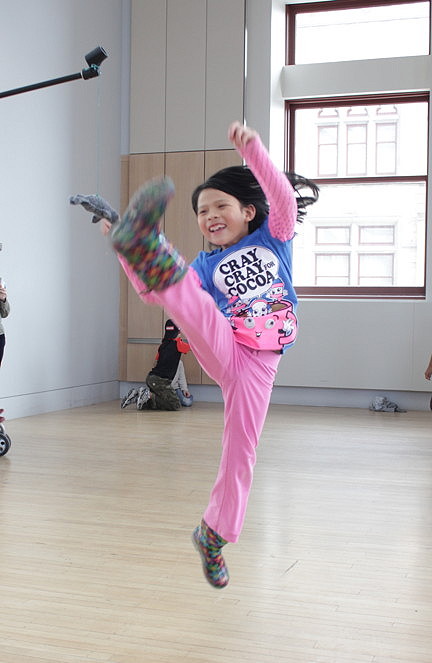 Hannah, celebrating her ninth birthday April 3, attempted the one-foot high-kick at the Canadian Museum of Nature Thursday along with fellow students of Bayview Public School in Ottawa. (PHOTO BY LISA GREGOIRE)

OTTAWA — “Isn’t it hard to get a whale from the ocean to your house?”

A Grade 3 boy from St. Patrick School in Ottawa is sitting in a room full of his classmates, addressing his question to Allison Zakal, the High School Bridging the Gap program coordinator at the Ottawa Inuit Children’s Centre.

Her face lights up with a broad smile.

“Yes, it’s true,” says Zakal, dressed in an amautit and wearing kamiks passed down from her grandfather. “It takes a whole team of people to do it.”

For a couple of days this week, she and her colleague Jasmine Doig, are presenting workshops on northern food security to school groups as part of the Canadian Museum of Nature’s annual Arctic festival.

The theme of this year’s festival, which runs April 3 to April 7, is Edible Arctic so many of the exhibits, performances and events are related to food.

Zakal, originally from Pangnirtung, has a number of show-and-tell props at the front of the room including animal skins and items made from skins, bones, antlers and baleen, including jewelry, games and toys. She passes them around.

“Why do you hunt for those animals?” asks one little girl.

“We hunt because it’s very, very expensive to buy food in the North,” Zakal says before offering some examples of food prices in Grise Fiord. Their eyes grow wide and parent chaperones shake their heads.

Zakal spent about a half hour explaining how Inuit hunt for food — sometimes using traditional tools made from the body parts of animals they harvest and sometimes using snowmobiles and guns — and how they make use of the different body parts.

Using vegetable oil and cattails for a wick, she demonstrated how Inuit used the qulliq for light, warmth and even for cooking.

“Inuit do not have a lot of ceremonies but this one is very valuable to us,” she said, lighting the oil lamp with a lighter. “It’s very calming.”

After the formal part of the workshop ended, she faced a sea of hands and a lot of curious questions.

“Why don’t you eat the beluga?”

“Is dog breeder the most important job?”

Zakal patiently answered each one and said afterward she enjoys sharing her knowledge about country foods and how important they are for nutrition, for preserving culture and also for allowing Inuit to eat healthy food without going broke.

Up a few floors, in the museum’s salon, a group of Nunavut Sivuniksavut students entertained Grade 3 students from Bayview Public School with their prowess in Inuit games.

Ipellie Ootoova offered a brief introduction, telling parents, teachers and children that the games of strength and coordination were a fun way to while away the hours on the land but also served to keep Inuit in shape for the rigors of outdoor living, travelling and hunting.

The games demonstration was a huge hit. What better way to hold the attention of a roomful of eight- and nine-year-olds than to show them the face pull, the knuckle hop and the one-foot high-kick?

Even better, the NS students then invited the children to try all the different games. The room quickly erupted with shouts and laughter.

“I thought it was amazing,” said Candice Metallic, mother of Cayden Metallic-Janvier, who excelled in leg wrestling.

She was impressed how Inuit used nothing but their bodies and their imagination to invent these games, and how they built the strength and endurance they needed to live on the land.

“It’s a totally different landscape,” she said of the North. “It’s a different reality of what urban people are used to.”

The festival continues on into the weekend with demonstrations from Arctic researchers, an Arctic animal and plant scavenger hunt, Inuit cultural performances as well as craft and food fairs.

Visitors can also see an exhibit of photographs by Barry Pottle, an Inuk photographer from Rigolet, Nunatsiavut.

His “Foodland Security” exhibit features images he captured of urban Inuit in Ottawa procuring, preparing and enjoying country foods in the city.

The museum’s main event takes place Saturday, April 5 at 7 p.m. with the Ottawa premiere of The Wings of Johnny May, a documentary by Marc Fafard on Canada’s first Inuit bush pilot.

Both Fafard and May, who is still an active pilot, will be on hand to take questions from the audience following the show.

The Inuit Tapiriit Kanatami is holding their annual A Taste of the Arctic extravaganza of food and entertainment at the National Arts Centre in Ottawa on April 7 in conjunction with the Edible Arctic.

The event features a smorgasbord of Arctic foods and beverages as well as a fur fashion show and musical entertainment. Tickets are $199 and can be purchased online here. 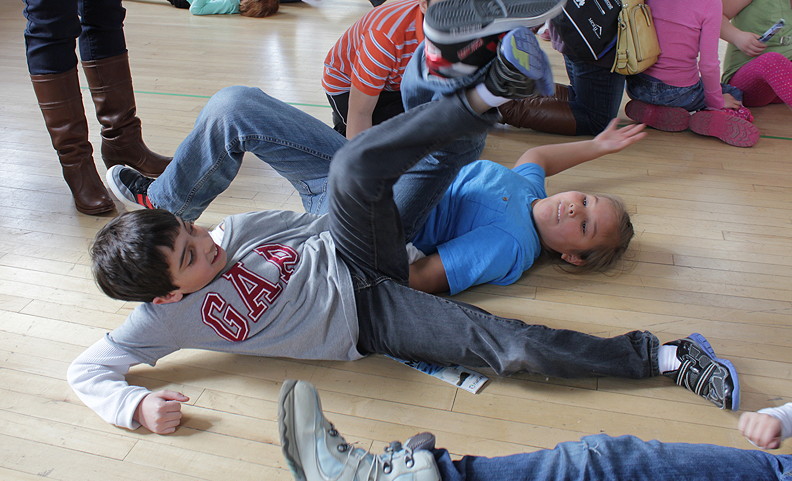 Harun, left, and Cayden, join their friends on the floor for a little Inuit leg wrestling during a school field trip to the Canadian Museum of Nature’s Edible Arctic festival April 7. (PHOTO BY LISA GREGOIRE)