“This proves oral history is strong with the Inuit, and it puts Inuit on the map, for the world.” 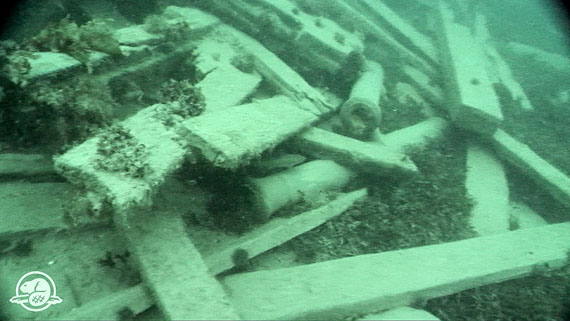 Two small cannons appear among scattered timbers of the Franklin shipwreck at the bottom of Queen Maud Gulf, in this image taken by one of Parks Canada’s remote-operated vehicles earlier this month. (IMAGE COURTESY OF PARKS CANADA)

The story of Sir John Franklin’s expedition dropped from the record in one part of the world, after its two ships entered the Canadian Arctic in 1846.

But the end of one story proved to be the start of a new one among Inuit in the region, who kept the rest of the tale within their own spoken record.

The Inuit side of the tale – told and retold from memory — held up this month, when it led to the discovery of a 170-year-old wreck of one of those ships in the middle of the Arctic.

“It’s a happy event,” said Louie Kamookak of Gjoa Haven. His lifelong work recording and investigating local elders’ stories contributed to the yearly search in its earliest stages, when Parks Canada embarked on the project in 2008.

The discovery of the wreck, long known in Inuit lore to have sunk in the eastern waters of Queen Maud Gulf, “proves that Inuit knowledge is very strong today, and it always has been,” Kamookak told Nunatsiaq News.

The shipwreck, and two artifacts found on an island nearby, fit the description of Inuit testimony.

The British Royal Navy’s expedition sent two ships – HMS Erebus and HMS Terror – to the Northwest Passage in 1845. Ice blocked their way, and would eventually trap the ships northwest of King William Island.

The freezing seas eventually crushed one vessel. The second, according to Inuit lore, drifted to its final resting place — believed to be the wreck found 11 metres beneath the sea, Sept. 7.

Although Kamookak’s work helped bolster new search efforts by the Government of Canada, the use of Inuit testimony is not new.

“Inuit have shared their knowledge of events surrounding the fate of the 1845 Franklin expedition” for more than 150 years, said Doug Stenton, director of heritage for the Government of Nunavut.

The loss of the two ships, with 129 men, touched off an early wave of search expeditions from Britain and the United States.

These searches included efforts to record testimony from Inuit eyewitnesses and their relatives from 1850 to 1879, according to David Woodman.

An author of two books on the subject, Woodman himself led privately-sponsored efforts to find the Franklin shipwrecks from 1992 to 2004.

“The interaction between the Inuit and Franklin’s expedition wasn’t just a European experience, obviously. It was also an Inuit experience,” he said. “Now they’re accepted more widely because one of them — a major one — has been shown to be true.”

This month’s discovery of one of the shipwrecks “couldn’t have been done” without the testimony of Inuit, Woodman agreed.

“We wouldn’t know where to look, and we never would have found the ship. No one would have bothered to look, because the area was just so large.”

The 2014 search area covers the full length of Victoria Strait and most of Queen Maud Gulf to the south, which hosts countless small islands, and extends to the western coastlines of King William Island and the Adelaide Peninsula.

The area is not only huge — it’s remote and inhospitable even for Inuit.

“They had no use for the area where Franklin’s ships were stuck,” said Kamookak. “It was not their hunting ground. There was lots of ice, all the time, and lots of ice movement.

“So there were very limited encounters with the people before they [Franklin’s crew] started dying off,” he said.

Indigenous testimony was scarce, and all the more precious for search efforts.

In his work, Woodman, like most other searchers before Parks Canada’s recent campaigns, relied on written records of Inuit testimony collected in the 19th century.

“There’s a saying amongst the group of people who look for shipwrecks,” he said. “The shipwrecks are never found in the water, they’re always found in the library — because you have to know where to look first.”

In this case, the Inuit testimony “was the library that was used to determine where to look,” he said.

Woodman collected and published much of this in his 1991 book, Unravelling the Franklin Mystery: Inuit Testimony, and a 1995 follow-up called Strangers Among Us.

That knowledge informed nine privately-funded search expeditions he undertook from 1992 to 2004. Woodman’s career as a mariner — he is a ship’s captain with B.C. Ferries in British Columbia — also informed his efforts.

“There’s a certain anti-Franklin bias that says they were all crazy, they should have known better,” he said. “But in my experience, looking at every stage of the way, I think they made fairly intelligent decisions. It’s just that they were in a no-win situation.”

Parks Canada led a government-funded expedition in 1997, which did not turn up any more clues about the wrecks’ locations.

Government interest in resolving the mystery once and for all picked up in 2006, which is when Parks Canada approached Kamookak in Gjoa Haven — the community closest to the search areas.

His lifelong interest in the stories of the Franklin expedition led him to collect information about shipwrecks and European explorers from more than 10 elders in his community, he said.

That information was just a starting point for Kamookak’s interest in the Franklin expedition — because none of the stories could identify the identity of the ships or the mariners.

Constructing the complete story called for some detective work.

“You match those Inuit stories to the European journals, or European stories,” he said.

Kamookak also found that stories of separate explorers seemed to have mixed and blended over time, with each retelling over generations, which called for an added level of verification.

He combined this research with his geographical knowledge of King William Island and the surrounding area to formulate fresh theories about the fate of Franklin’s ships and the crew.

“In the planning stages, most of the contacts have been with the people of Gjoa Haven,” he told Nunatsiaq News in an email from the study area, Sept. 11. Kamookak’s information in particular, he said, “suggested areas that might profitably be searched.”

Stenton led a ground-based search party that made the first findings of this year’s effort, Sept. 1, on the shoreline of an unnamed island in Queen Maud Gulf.

Shortly after arrival, the crew found an iron artifact, identified as part of a boat-lifting mechanism.

The 20-centimetre-long item bore the markings of an early 19th century British Royal Navy ship. A second wooden artifact found nearby appeared to be from the same source.

“This is fascinating because Inuit oral traditions talked about this general area as being where one of the ships was sunk and was wrecked, and nothing like this had been found in the area,” Stenton said at a Parks Canada press conference in Ottawa, Sept. 10.

“So we were very excited by the prospect that the two artifacts together might provide a very important clue.”

The find raised the hopes of sea-based search crews in the vicinity, who re-adjusted their search pattern of the sea bed.

Within days, the sea-based search crew, led by Ryan Harris of Parks Canada, made the big discovery. Their sonar-scanning equipment found the shipwreck at the bottom of the gulf.

The big find confirms what Kamookak’s research suggested. The waters where the ship lies, which Parks Canada has kept confidential to protect the site, agree with his research.

“I am very happy,” Kamookak said. “After so much previous searching, they had decided to reopen the search, based on Inuit theory.”

“This proves oral history is strong with the Inuit, and it puts Inuit on the map, for the world.”