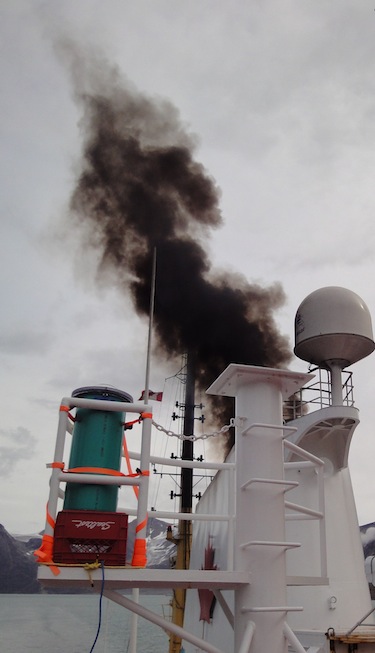 The Inuit Circumpolar Council wants to see reductions in the amount of black carbon that enters the Arctic— those tiny black particles produced by the exhaust of airplanes, ships, generators and fires, which act as magnets for heat. (FILE PHOTO)

The Inuit Circumpolar Council is urging world leaders to recognize the essential role that the Arctic plays in maintaining the word’s climate.

ICC chair Aqqaluk Lynge wants leaders now at United Nations climate talks in Doha, Qatar to recognize the role of the Arctic in “sustaining the global climate systems and supporting life on Earth” as well as the “fundamental human right of Inuit to a healthy environment.”

Lynge also says Inuit should have access to a “green technology fund” to help them cope with the impacts of climate change in the Arctic.

That fund would allow developed nations, like Canada, Denmark or the United States, to assist resident indigenous peoples, including Inuit, to adapt to climate change and develop renewable energy sources.

“The health and well-being of Inuit are inextricably tied to our environment,” Lynge said.

Inuit are “deeply concerned and acknowledge that changes are going to continue and be irreversible” if those climate-warming emissions continue to rise, the ICC statement to Doha delegates said.

But in Doha, where talks continue until Dec. 7, delegates are still debating what to do about climate change and who will pay the mounting bill for its damages.

Their talks could result in an extension for the Kyoto Protocol, which asked 35 developed nations to commit to cutting their emissions of climate-warming greenhouse gases by 2012.

But that won’t be easy: there’s little agreement among the parties on making further emissions cuts or who will pay the billions of dollars that developing nations are demanding to help them cope with climate change.

Other actions suggested by ICC to limit climate change include an official acknowledgement of the role of black carbon (the tiny particles known as soot produced in the Arctic by ships, airplanes and diesel-powered generators), along with actions to reduce its presence in the Arctic.

ICC also wants the Arctic Council to be recognized as a model of cooperation between states and indigenous peoples.