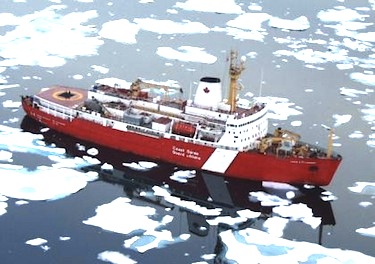 An aerial view of the Canadian Coast Guard icebreaker Louis St-Laurent, which has been called the queen of Canada’s icebreaking fleet. After being marooned off Cambridge Bay in 2011 following mechanical breakdowns, the ship was withdrawn from service and put into dry dock for repairs. The refurbished vessel is now heading towards the Lomonosov Ridge area between Ellesmere Island and Greenland to collect data for Canada’s continental shelf extension submission under the UNCLOS process. (PHOTO COURTESY OF THE COAST GUARD)

As two Canadian icebreakers travel north on a survey mission to bolster the federal government’s claim to Arctic offshore resources, Inuit leader Terry Audla has a message: “Inuit need to remain the deciders as to whether or not any extraction will happen… there’s a need for a lot more consultation and information and knowledge-sharing.”

Audla, president of the Inuit Tapiriit Kanatami, told Nunatsiaq News that ITK supports potential developments of Arctic resources, so long as these are based on sound consultation and respectful of land claims in each Inuit area.

The icebreakers — the CCGS Terry Fox and CCGS Louis S. St-Laurent — left Newfoundland last weekend to collect information needed for Canada’s submission to the United Nations’s Convention on the Law of the Sea process for extended seabed rights.

Under UNCLOS, nations with Arctic Ocean coastlines — like Canada, Russia, the United States, Denmark and Norway — can claim economic rights to offshore territory beyond the 200-nautical-mile limit if they can prove that underwater geology shows the seabed is actually an extension of their land base, the continental shelf.

Canada filed a claim with UNCLOS in December 2013, but only for the North Atlantic portion of its continental shelf extension.

Prime Minister Stephen Harper wants Canadian scientists to do more work on the Arctic portion of its claim this year and next to prove Canada owns rights extending to the North Pole.

At stake is control over potentially huge oil, natural gas, and mineral reserves that scientists believe lie under polar waters.

The vessels will survey the eastern side of the Lomonosov Ridge, which extends from northern Ellesmere Island and Greenland to Siberia, a news release from the department of Foreign Affairs, Trade and Development said Aug. 8.

“If ice conditions permit, this survey will include areas in the vicinity of the North Pole,” DFAIT said.

A second survey will be done in 2015, the news release said.

The Canadian government signed UNCLOS in 2003, with a 10-year window for claims to extend the undersea continental shelf. Canada submitted a preliminary application for an extension this past December — although a 2012 Foreign Affairs report said a ruling from the UN could take as long as 16 years, to 2030.

As for the need for consultation and Inuit involvement in UNLCOS, Audla pointed out that regulatory bodies have a duty to consult local people when development occurs on or near their land.

This is becoming more of an issue of late, in Nunavut.

For example, a judge granted a temporary injunction against a seismic testing project within the Nunavut Settlement Area in 2010 saying that the Government of Canada did not undertake meaningful consultation with North Baffin residents as is required under the Nunavut Impact Review Board and Ottawa’s licence issued by the Nunavut Research Institute.

In June, a Montreal lawyer giving a presentation in an Iqaluit boardroom said the federal government must respect Inuit rights which overlap with Canada’s sovereignty claims.

“If Canada wishes to claim sovereignty over area covered by these rights, it must engage with Inuit for the purpose of obtaining their free, prior and informed consent,” a paper co-authored by lawyers Peter Hutchins and Robin Campbell, and commissioned by Sen. Charlie Watt, says.

And as for the latest round of seismic testing in Davis Strait, lawyers for Clyde River groups opposed to the project will again argue that despite the project’s location outside of the Nunavut Settlement Area, regulatory bodies still have a duty to get prior and informed consent since the underwater sound waves could impact marine mammals which Inuit harvest.