“I feel so excited about it” 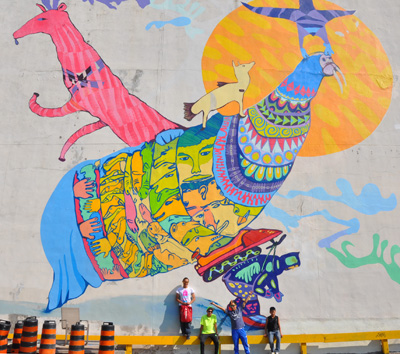 The 60-foot high mural covers the side of a youth hostel at the intersection of Church and Adelaide Streets in Toronto. (PHOTO BY SARAH ROGERS) 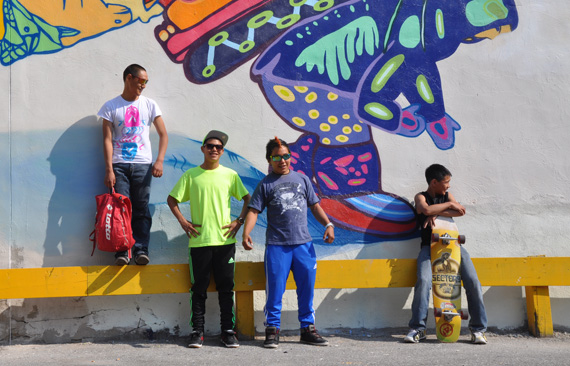 From left, Cie Taqiasaq, Parr Etidloie, Audi Qinnuayuaq and Latch Akesuk, stand in front of the completed mural they designed and painted onto the side of a building in downtown Toronto. (PHOTO BY SARAH ROGERS)

TORONTO — If you couldn’t hear them chatting in Inuktitut, these four Nunavummiut teens might look like your average Torontonians, sitting on curbs and skateboards along a busy downtown street, smoking and eating a box of Tim Hortons donuts in the sweltering summer heat.

But in the short time these teens have been here, they’ve made a huge impression on the neighbourhood.

A passerby dismounts from her bicycle, takes a long look at the wall behind the teens, and wishes them congratulations.

“It looks amazing,” she said.

Cape Dorset artists Audi Qinnuayuaq, Latch Akesuk, Cie Taqiasaq and Parr Etidloie just completed one of the biggest projects of their lives: a giant, colourful mural on the side of a youth hostel in downtown Toronto.

The image, which easily grabs the attention of hostel guests, pedestrians and drivers stopped at red rights, portrays a Cape Dorset elder — Parr Etidloie’s grandfather, Etulu — carrying a broken-down snowmobile on his back.

It’s a story Etidloie heard often growing up; one he thought made the stuff of legends, and apparently, urban street art.

What would his grandfather think of being painted onto a wall in a big southern city? Etidloie, 16, laughs. “I’d like to see his face, when he finally sees it.”

Atop the snowmobile, a giant walrus spans the wall, its body a puzzle of interconnected faces of seals, polar bears, wolves, fish and even humans.

Other wildlife stand on the back of the walrus, backed by a giant orange sun.

“We sketched it all on paper first, and then projected it onto the wall,” explains 17-year-old Cie Taqiasaq, “and then we just started painting.”

The 60-foot-high mural took about a week to complete.

“I feel so excited about it,” Taqiasaq said. “It feels good to be finished.”

This is actually the second major mural the group has worked on, led by Toronto-based artists Alexa Hatanaka and Patrick Thompson and their Embassy of Imagination initiative.

The first was a mural the group painted on one of the walls of Cape Dorset’s Sam Pudlat elementary school, depicting a hand holding a tool, painted within the face of a bird.

But this Toronto mural is the group’s first southern project, and likely to draw its largest audience yet.

All the artists agree: the mural is a great way to promote Inuit art and culture, not only to Torontonians, but to the many visitors staying at the hostel.

“This is our first project out of the North, so it’s significant to do something so massive,” Hatanaka said.

“And a lot of the time, art produced in Cape Dorset leaves the community, and they don’t get to see it again,” she added.

“So this is a change for them to see their legacy, and to see the high regard Cape Dorset art is held in.”

To help audiences trace the work’s origins, the group will put up a plaque on the mural to explain the image and its background.

And a blank wall just to the left of the mural may offer up a canvas for a future “add-on” to the mural in 2016, the group said.

This year’s project was done with the support of two other organizations: Mural Routes and Nunavut Arts and Crafts Association.