Inuit youth set a course for future under new leader 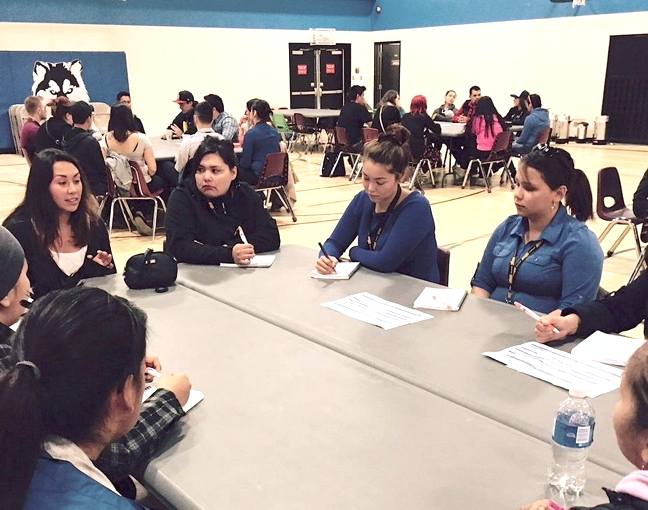 About 70 youth from across Inuit Nunangat, and a few from Greenland, met in Iqaluit for five days recently to discuss everything from suicide prevention to an Inuit university. (PHOTO COURTESY INUIT TAPIRIIT KANATAMI) 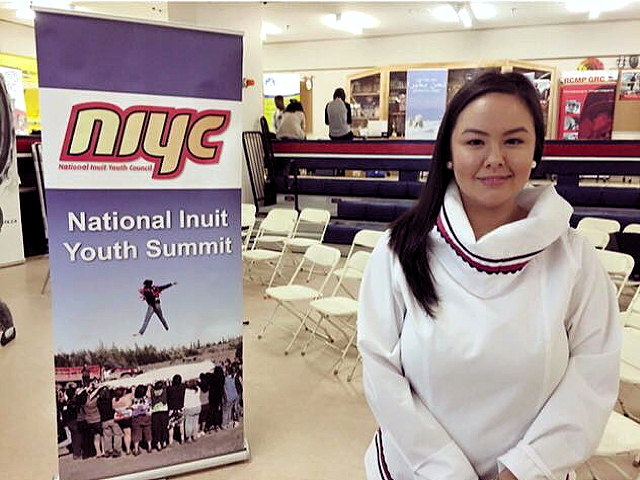 After five days of debating issues, sharing stories, reconnecting with elders, and lamenting about colonial influences, the decline of Inuktitut and the lack of a northern university, it’s time now to put those thoughts into action, says Maatalii Okalik.

Okalik, the newly-elected president of the National Inuit Youth Council, took a break from attending the Inuit Tapiriit Kanatami language summit in Iqaluit Aug. 26 to offer her thoughts on what the NIYC will be working in the coming months and years.

And while that list of items might be long and the social and historical obstacles challenging, Okalik said the impression she got from youth at the recent Iqaluit summit was: bring it on.

“There was definitely some disappointment shared by the delegation, but what was uplifting was the fact that the disappointment has turned into determination to try to address some of the intergenerational affects of our history,” said Okalik.

“There was a common feeling among the delegation to use that determination to challenge current systems and explore how, as Inuit youth venturing in their journeys of education and employment, can right the wrongs of that history.”

About 70 youth from across Inuit Nunangat, including a small delegation from Greenland, attended the Aug. 20 to Aug. 24 gathering at Inuksuk High School which included workshops, a trip out to Sylvia Grinnell Territorial Park to eat country foods brought by Nunavik delegates and even a talent show.

But they also covered difficult subjects like suicide prevention, Okalik said, as well as culture and language loss and how that impairs relationships between youth and their elders.

According to the Nunavut Bureau of Statistics, as of July 2014, the territory’s population stood at 36,585.

Of those, almost exactly half were 24 years old or younger. And 37 per cent are between the ages of five and 24.

Makivik Corp. reports that 60 per cent of Nunavik’s population is under age 30 — twice the percentage that age in southern Quebec.

So when Inuit leaders talk about the importance of youth issues and getting youth involved in business, education policy, politics and social issues, it’s because there are a huge number of young people who are taking over leadership of Inuit Nunangat.

But to do that, Inuit youth often have to leave their homeland, Okalik said, to get better educated, to get healthy or to get jobs.

For that reason, she’s hoping to expand the current mandate of the NIYC so it can also represent the many Inuit youth living in Ottawa, Montreal, Winnipeg and St. John’s — those raised in cities and those who are temporarily located there.

Okalik, who grew up in Ottawa, knows about that urban Inuit world.

She also talked about ways to keep more Inuit in the northern territories and one way, she said, would be to establish an Arctic university in Canada.

Not only would more Inuit go to university, she said, it’s likely more Inuit would be motivated to graduate from high school since the idea of university would no longer seem so daunting and remote.

The Government of Nunavut announced in June that it will conduct a feasibility study for a university to be located in Nunavut. They already have a $5-million donation from the chair of Agnico Eagle Mines.

And before that, in March, a group of academics and public policy makers gathered in Iqaluit to talk what would be needed to build a university in northern Canada.

They released a report which you can read at the bottom of the story here.

As Okalik pointed out, much has to happen before a university is ever built in Nunavut, but she said the NIYC supports the efforts of governments, academics and the private sector in this regard.

“I understand that there are a number of stakeholders that are part of the conversation and we do understand it’s still in the exploration process,” Okalik said.

“However we are in support of that exploration, to one day see a university in the circumpolar world specific to Canada.”

But throughout the youth summit, it was language and culture loss that seemed to come up again and again. Okalik said it’s obvious youth feel strongly about these issues and it’s one reason why she attended the ITK language summit in Iqaluit this week.

“Even Inuit youth who are raised in Inuit Nunangat, there is a trend of language decline and that is problematic because we identify language to be an integral part of our culture,” she said.

“In order to strengthen our identities and to lead meaningful lives reflective of our culture and to ensure we’re working for the best interest of our people, we want to ensure language revitalization, retention and promotion. That’s definitely one of our priorities at the council.”

Okalik said the seven-member NIYC — created in 1993 when ITK was known as the Inuit Tapirisat of Canada — will soon debrief from the summit to set an agenda for the organization and make note of any possible improvements for the next national youth summit, scheduled for 2017.

She encouraged Inuit youth to make their opinions and suggestions known to the NIYC through its website and through social media avenues such as Twitter, and Facebook.

She also encouraged Inuit youth to contribute stories and artwork to their magazine, Nipiit. You can see copies of the magazine here.