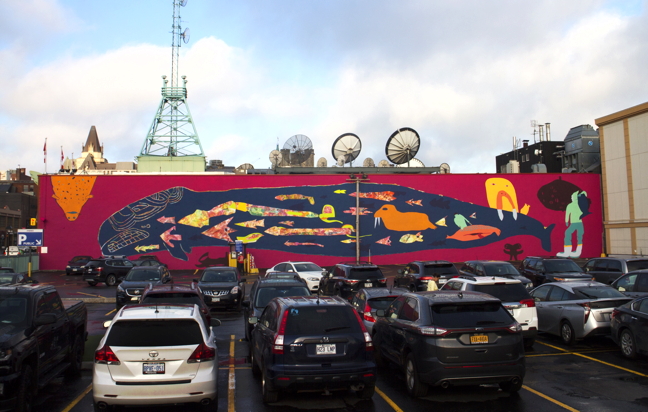 Tunnganarniq, or “fostering good spirits by being open, welcoming and inclusive,” an Embassy of Imagination project designed and painted by young artists from Cape Dorset, was unveiled in Ottawa’s downtown Byward Market on July 16. (PHOTO COURTESY ALEXA HATANAKA) 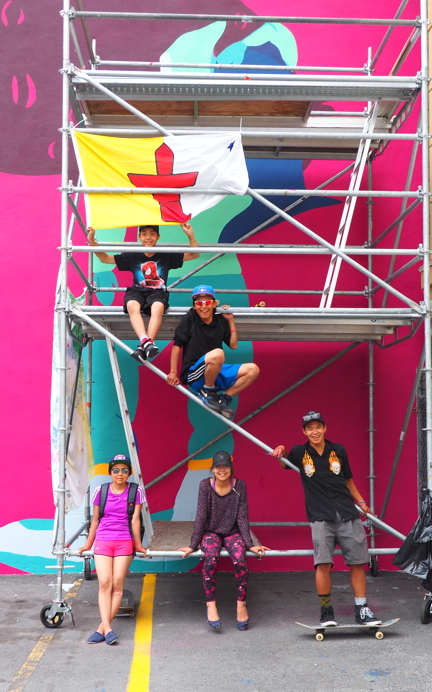 Embassy of Imagination artists from Cape Dorset pose on the scaffolding in front of the huge mural they just painted and unveiled in Ottawa’s Byward Market July 16. The artists include Harry Josephee, Kevin Qimirpik, Janice Qimirpik, Christine Adamie and mentor Parr Josephee. (PHOTO BY COURTNEY EDGAR)

OTTAWA—A pink, two-headed owl the side of the Bell Media building in Ottawa’s Byward Market is more than just a decorative picture to brighten up the neighbourhood.

It’s a reminder that there are many ways of looking at, and interpreting, art and culture, says Parr Josephee, an 18-year-old artist and Embassy of Imagination mentor.

“Everyone has their own perspective and imagination,” Josephee says. “It gives other people some inspiration.”

Located in the middle of the wall, the surreal owl is just one detail in a colourful new mural entitled “Tunnganarniq,” which, translated to English, means “fostering good spirits by being open, welcoming and inclusive.”

The huge work features an Arctic scene which includes a bowhead whale, inspired by a story about a whale who was found with a 100-year-old harpoon inside its body.

The unveiling of the EOI Ottawa mural on July 16 resulted from a year’s worth of planning and training, and ten full days of painting in Canada’s capital. The project was done in partnership with the Ottawa School of Art as part of four murals for the Canada 150 celebration.

The Embassy of Imagination is an arts collective, founded by Toronto artists Alexa Hatanaka and Patrick Thompson, which supports Inuit children and teens to make art, both in Nunavut and in southern Canada.

Hatanaka and Thompson chose five motivated Cape Dorset youth, aged 13 and 19, to fly to Ottawa in early July to work on their largest and most ambitious project to date.

Flights were covered by Inuit Tapiriit Kanatami and the young artists also received an honorarium for their work, funded through an organization called Taking It Global.

“The kids did everything,” said Malika Welsh, development and fundraising coordinator at the Ottawa School of Art.

Ottawa needs more public art like this, she added.

“It is accessible—it is right there for the public,” Welsh said. “You don’t have to go in to a gallery, you don’t have to pay admission. It is easy to see and easy to get to.”

Janice Allooloo, 15, who started doing the EOI workshops in Cape Dorset three years ago, said her experience has been “awesome.”

“I like how it is so big,” Allooloo said. “I am proud of myself because I get to see my art work when I go here.”

All the paint for the mural was donated by a paint store, saving the team, and the Ottawa School of Art, about $10,000. A pressure washer company even washed the mural site for them in advance, at no cost.

“Without all of these supporters, it would have been very difficult,” Welsh said.

She hopes the mural will stay up for at least five to ten years but the group will have to re-negotiate with Bell after a year to seek permission to leave it in place, she said.

The mural concept began with artists designing individual elements. Those drawings were then pulled together and re-arranged on Photoshop to incorporate all the different elements into one coherent piece.

“All the harpoon heads I designed,” Josephee said. “My brother designed the pole harpoons and Janet did the walrus.”

Josephee has been making murals with the Embassy of Imagination for a few years and he says this is the biggest art piece they have done so far, and in the fastest time.

“This is a totally new experience for the kids,” he said. “We don’t really have much chance to come down here so this project actually helps kids a lot. It helps them experience things they can’t—like seeing a tree for the first time.”

According to Josephee, EOI has changed his life.

“Maybe some day these kids can be like Alexa and Patrick, and help organize future projects like this,” he said.

“Without this program my brother wouldn’t be here right now looking at all these buildings and trees and people, and realize that the world isn’t just one small community in Nunavut.”

Josephee says that he has changed a lot through his work and association with Hatanaka and Thompson.

“When I first came down here, I was shy and a bit scared,” Josephee said. “And now people come to us here and say, ‘Wow, this is beautiful, this is amazing, thank you so much!’ So it’s just a great experience for everyone.”

Hatanaka says this project takes a critical look at Canada at this time. “We push the envelope on what youth engaged projects can be,” she said.

The key to their work is relationship-building and the mutual respect that goes along with that kind of long-term relationship, said Thompson.

“You can be scolding to the kids when they need it, but they know that you’re doing it with love, and that you’re not just a fly-in and fly-out.”

As for the two-headed owl, Josephee believes its a great way to motivate and inspire people to make new things.

“It’s to show people that it doesn’t need to be realistic to be beautiful,” he says. “Kids always have a great imagination—they always see something different.”

“If they’re in a bad mood, they can start thinking about what it is and forget all about the bad mood,” Josephee said.