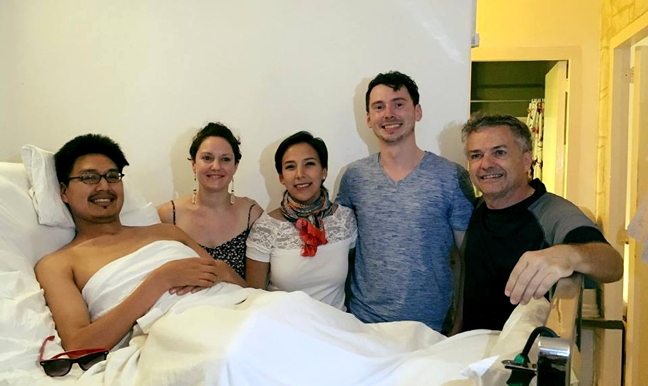 Napu Boychuk, with his father Dan, far right, and members of the Jerry Cans from left: Gina Burgess, Nancy Mike and Andrew Morrison. The Jerry Cans were performing in Cuba in February, heard about Boychuk and paid him a visit for a private concert. (PHOTO COURTESY TUUTALIK BOYCHUK) 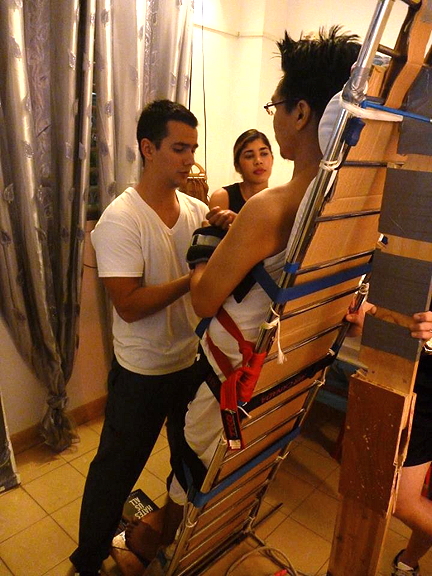 Napu Boychuk gets daily physical therapy, sometimes in an “upright bed” that his father, Dan, constructed for him. (PHOTO COURTESY TUUTALIK BOYCHUK)

Spending a year in Cuba might not sound so bad, unless you’re a classically trained dancer, bedridden, unable to move your body and running out of money.

Inuk Napu Boychuk, now 30 and raised in Yellowknife as a child, has been in Cuba since December 2015, when he suffered a spinal cord injury and subsequent paralysis in the waves off Varadero, Cuba while on vacation with his sister, Tuutalik, and their father Dan.

An aspiring and talented ballet dancer, Napu was only months away from earning a Bachelor of Fine arts in Dance Performance at Ryerson University in Toronto when the accident took place.

Dan and Napu have been in Cuba ever since, living in an apartment near the hospital where Napu spent five months under the care of local doctors and nurses.

Reached after hours in Kingston recently, Tuutalik said that, during her last visit to Cuba at Christmas, Napu was gaining more movement in his arms and fingers, but he still has little body control.

He is also starting to feel hunger as well as the need to urinate—which proves the intensive physical therapy is having an impact and that his recovery has yet to plateau, Tuutalik said.

But progress is slow and Napu still needs 24-hour care. It’s difficult to maintain hope and motivation, Tuutalik said. Even more difficult, however, is trying to pay for that recovery.

For seemingly technical reasons, the company that holds Napu’s medical insurance through Ryerson University, where he’d been attending school, has refused to cover their costs.

“It’s almost as if the money and the insurance is a bigger problem than the spinal cord injury itself. And that’s the sad part about all this,” she said, identifying the insurer as Global Excel. “The insurance company, in some ways, it’s the worst thing that’s happened to us.”

They now owe the hospital in Cuba more than $57,000. The hospital has agreed to let them pay it back in instalments, but it’s still a burden with the continuing cost of nurses, physical therapists and living expenses in Cuba.

They plan to come back to Canada as soon as they can but feel that if they returned now, Napu would be warehoused in a Toronto hospital with overburdened staff, wait lists for physical therapy and the potential to lose precious momentum they have fought to gain.

And while the situation does feel bleak at times, they say they have been blessed with support from friends and strangers alike.

Some of the those strangers are kind of famous.

Iqaluit’s Jerry Cans were in Cuba a few weeks ago on commission with the Canadian embassy to perform at the Havana Book Fair.

Band members invited the Boychuks to their Havana concert, but Napu was unwell at the time and unable to go so the Jerry Cans visited Napu and performed a private concert for him instead.

“We were so touched,” Tuutalik said.

She said the visit, which lasted about an hour, was a huge boost for both her brother and her father, who has been bearing the brunt of his son’s accident by organizing all his peripheral care.

And it turns out, the visit was also boost for Jerry Cans’ frontman Andrew Morrison.

Reached in Iqaluit where he was packing to cross the Pacific Ocean for a month-long Jerry Cans tour in Australia, Morrison described what happened.

“All of our northern instincts kicked in right there. We didn’t know Napu but we dropped everything and we were like, ‘We gotta go visit him.’ That’s just kind of northern style,” Morrison said.

“It was so inspiring to see how he’s facing this situation. He had a huge smile on his face and was so welcoming to us. It was a special moment, highlight of the trip for us, actually.”

After a few raucous tunes brought energy to the nurses and all who were gathered, violin player Gina Burgess slowed it down with a solo Bach piece, Morrison said.

“The whole room went silent and she played for five or six minutes and Napu, he got this twinkle in his eye and he said, ‘You know, I bet I could choreograph a dance to that song,’ and we all had tears in our eyes. He had such determination and hope. It was super inspiring.”

So inspiring that the band is donating the proceeds of their album sales for a month to the Boychuk family. So if you haven’t purchased their new collection Inuusiq yet, do so before March 16 and you can also support the Boychuk family.

And if you go to the Jerry Cans Facebook site and share the post which announces the fundraiser, your name will go into a draw for an over-the-phone live performance from the Jerry Cans themselves.

Tuutalik said such generosity is overwhelming. And others have stepped up too—a dancer friend of Napu’s plans to hold a fundraising event in Detroit in April and friends of hers helped set up a Gofundme fundraising site.

Since making the site live this week, they have already raised $1,150.

As well, Laakkuluk Williamson-Bathory of Qaggiavuut—an Iqaluit-based performing arts organization—told Tuutalik that once Napu is well enough, they’d like to work with him, perhaps as a dance teacher or choreographer.

It’s something for him to look forward to, she said, a ray of sun in what has been a year of storms.

“I think he misses dancing the most. He misses his ability to express himself through dance. That’s a big thing for him,” Tuutalik said.

And yet, he still seems to find a reason to smile and laugh every day, she added.

“If it were me or my dad, we would be totally different patients. I’ve had so many friends tell me how inspiring he is. I don’t think I would be inspiring, as a patient.”