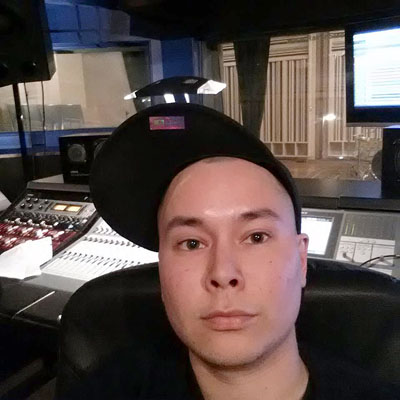 Inuk hip-hop artist Hyper T was in Grade 6 when he first contemplated suicide.

But now the 28-year old, originally from Chesterfield Inlet, has just completed an eight-month intensive studio and mixing program in Ottawa and wants to shed light on what he calls “the Ugly of Nunavut,” what he says nobody in Nunavut wants to talk about.

“I went through a time where I was constantly thinking about negative thoughts, and how I could somehow leave this world without affecting my surroundings,” Hyper T said, explaining one of his more recent tracks “Brainwashed.”

The song, rapped in Inuktitut, is about some of his darkest days, but ends in hope, a plea to help young Inuit suffering with depression.

“So I was basically brainwashing myself into thinking it was okay to leave because I was so hurt, and that people would understand where I am coming from as everyone thinks about it at one point, and in Nunavut it happens all the time, so it grows with you.”

Nunavut suffered more suicide deaths — 45 — in 2013 than during any other year in the territory’s 15-year history, prompting Nunavut’s chief coroner to announce a public inquest.

It’s obvious from the way words spill out of Hyper T that rhyming, rapping and finding his voice are crucial coping mechanisms.

But coping mechanisms are different for everybody, he said.

“One thing that definitely helps me is just sharing my experiences, telling how I dealt with it, and what were the wrong ways of dealing with it, that I know, that I know for myself were the wrong ways. But in terms of the right ways, there really is no right way, it really depends on the person. There’s so many different coping techniques for people that I tried that didn’t work for me, that worked for other people.”

Hyper T reached out to Nunatsiaq News to share his experience and his music. This is, in part, his story, but it’s a story that will be all too familiar to many. It’s a story that has swept over the tundra, sea and ice of Nunavut, like a cold whispering wind, for far too long.

Growing up with suicide

Adam Tanuyak — Hyper T’s birth-name — moved from Chesterfield Inlet to Rankin Inlet when he was 10 years old. The move was hard on him: he’d left his family and friends behind.

One day, shortly after the move, a big argument with his mom turned his mind to suicide, even though, he admits, he didn’t really understand what it meant.

“I kinda knew what suicide was, but not really. I knew I was gonna be gone,” he said.

It was around the same time he began discovering rap and hip-hop.

The artist Tupac Shakur had an early influence on Hyper T, because he rapped about things Hyper T could relate to, like having a single mother who had her own issues with depression and growing up without a father figure.

“When I moved to Rankin there were a lot of kids who used to go out hunting with their dads and they’d come back to class on Monday and were all talking about how they went hunting. And I was just quiet because I didn’t have anyone to take me out,” Hyper T said.

It wasn’t the gangster image of Tupac that Hyper T related to — “I’m nothing like that” — but the emotional aspect of his songs.

He started writing rhymes around the same time, and his love for rap and hip-hop grew from there.

A year or two later a classmate of Hyper T’s died by suicide.

“I remember asking my mom, like, is she going to hell? Should I pray for her? Is it even worth it?”

Growing up, he was told those who killed themselves would spend an eternity in hell.

“I didn’t believe any of that. But when you’re a kid… you think maybe I should just commit suicide, I won’t be living in pain anymore, people will forget me, or people will start to love me more and blah, blah, blah. It’s crazy though.”

With his darkest thoughts, Hyper T felt utterly alone, as everyone had abandoned him.

“That’s not true, though. That’s what I used to think,” he said.

Now, he says it’s when we’re most in need of support and love is when we’re most likely to feel alone. Our minds play tricks on us to convince us nobody cares and that the people who say they care about us aren’t around, he said.

“But they are, and it’s just our minds, our thoughts, trying to make us feel better, to piss them off so we can say, alright, they’re mad at me,” he said. “It’s almost childish.”

He was especially blind to the support around him when he was drinking.

“I was constantly drinking, not realizing it was affecting me, like it was making my problems worse. It was more about partying, I thought, but I didn’t realize it was making me worse,” he said.

Part of the problem was the way he understood depression as a mental illness that needed to be fixed by pills and institutions.

“So I always thought, I’m not like that, I’m not crazy, I’m gonna deal with this by myself or I could do this on my own.”

It wasn’t until Hyper T read an article about Mary Simon, the prominent Inuit diplomat and politician who’s had a long and remarkable career and who has also suffered with depression, that he started realizing that he could do something about it with the help of others.

The article inspired him to talk to a counsellor and to read up on depression and its symptoms.

“I started to relate and I was like, wow, I have all these symptoms,” he said.

That’s when Hyper T knew he had to start working on himself, and that’s when he started opening up on social media and with his music, exploring the Ugly of Nunavut.

Hyper T has faced his share of adversity and hard times.

Shortly after moving to Ottawa, at 19, for the Nunavut Sivuniksavut program, he met and became instant friends with another Inuk hip-hop artist, Tolok Havioyak.

Havioyak encouraged Hyper T to write his rhymes down, and then to rap them to a track, which they recorded together. Hyper T gained confidence in his musical abilities for the first time in his life because of the faith that Havioyak showed in him.

But less than a year after their meeting, Havioyak died in an apparent hunting accident. Hyper T was devastated.

“I couldn’t rap for a few months after that. But then I picked it up again, because I knew if he was still alive, we’d be going hard at this,” Hyper T said.

Almost every track on Hyper T’s website talks about persevering, about keeping your head up and finding inner strength.

Battling depression is an ongoing process, Hyper T said, but, looking back, he’s learned some lessons.

“I think they should start teaching about depression in schools, like right at junior high,” he said.

He remembers class discussions on self-confidence and self-esteem, but it wasn’t enough, he said.

People in Nunavut, especially the young, need to be educated, Hyper T said, to know when they’re depressed and to find positive ways of dealing with it, like talking to friends or counsellors.

“You have to realize, I am depressed, I need help, I need to get help, instead of, I think I need help, but I’m just gonna deal with it on my own.”

The final verse of Brainwashed, which Hyper T translated into English, says, “suicide is on my mind/ because Nunavut has been cursed with it, and we’re all hurting inside/ so you can hate on the situation and join the curse/ or we can somehow come together and teach the youth and start to heal.”

Hyper T plans on returning to Red River College in Winnipeg this upcoming January, to finish a business management program he started a few years back.

He’s currently working on getting funding to shoot music videos before releasing his self-produced album.

To hear more of his music, visit his Sound Cloud web page.