“This overwhelming sense of confidence and pride. It was surreal, I can’t compare it to anything,” 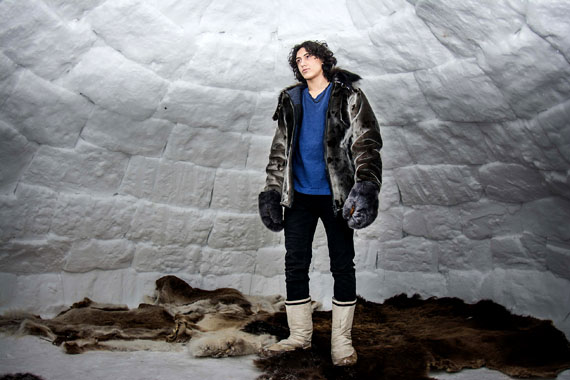 Braden Johnston, 17, with his new sealskin parka. He had posted a photo on Facebook of himself wearing the parka, with the hashtag #FuckPeta, and than 100 people shared it, including his mother’s childhood friend, Inuk musician Tanya Tagaq. Facebook deleted Tagaq’s post and banned her, but apologized later, saying they had made a mistake. (PHOTO BY KAYLEY INUKSUK MACKAY) 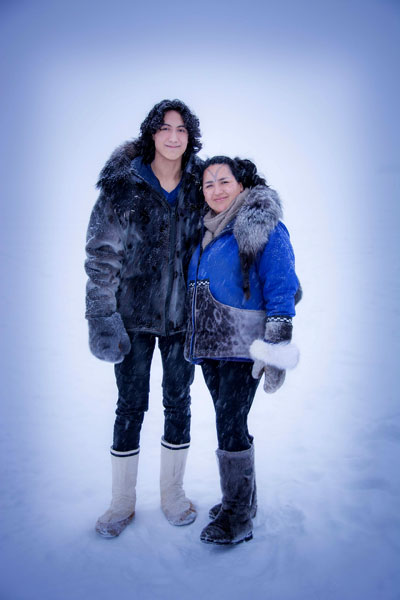 Hovak Johnston with her son, Braden Johnston, 17, who’s wearing the sealskin parka she recently made for him. (PHOTO BY KAYLEY INUKSUK MACKAY)

When Braden Johnston, 17, first put on the new sealskin parka his mother made for him, a powerful change came over him.

“It was kinda like a personal coming of age for me, finally getting a sense of affirmation with Inuit, the Inuk I have in me. This overwhelming sense of confidence and pride. It was surreal. I can’t compare it to anything,” said the young man, who is in his last year at Yellowknife’s Sir John Franklin High School.

With the blessing of his mother, Hovak Johnston, Braden posted a picture of himself wearing the parka with the hashtag, #FuckPeta. (Peta, which stands for People for the Ethical Treatment of Animals, is an American animal rights group.)

The negative backlash from that post was expected, Braden said Feb. 2, as were the hateful comments from so-called animal rights activists.

But before long his picture was shared more than 100 times on Facebook, including by his mother’s childhood friend, the award-winning Inuk musician Tanya Tagaq.

Tagaq, who was preparing to give a concert in Nuuk, Greenland, Feb. 3, confirmed to Nunatsiaq News that Facebook deleted her post and then banned her from the social media site.

What really surprised Braden, though, was the love and support—not the hate—that his simple post inspired.

“I couldn’t have put a bigger target on my back with that hashtag. But what surprised me was the vast amount of love and support and coming-togetherness with the Inuit community. And not just Inuit, but different ethnicities across Canada, even other countries, sharing the photo and giving support… It was unreal and beautiful.”

The message Braden said he hoped to convey with his picture went far beyond animal rights groups like PETA.

“For me it wasn’t just ‘Fuck Peta’, but a ‘fuck you’ to every government or person or group who have told Inuit what they can and cannot do and wear, what’s acceptable and what isn’t. It was me being fed up at not being able to be proud of my culture and people,” he said.

His mother, Hovak, wanted to make her son “something special… before he leaves the house,” since Braden is now almost 18, Hovak told Nunatsiaq News from her Yellowknife home Feb. 2.

Hovak said she grew up at a small outpost camp between Cambridge Bay and Kugluktuk, known as Bay Chimo or Umingmaktok, before moving to Kugluktuk, where she lived with her own family. She later relocated to Yellowknife.

When Braden realized his mother was making him a sealskin parka, Hovak said her son could barely contain his excitement, which in turn inspired her.

“When he put it on, it was like he was a changed kid. So many things went through him—like when a young [Inuk] girl gets her first tattoo, that same experience I saw in his eyes, like he just got something so rewarding, that he’ll be proud of. It was more than I expected.”

Hovak said there are many hunters and seamstresses in her family since she tried to teach her kids Inuit cultural values, such as using all parts of harvested animals.

That’s why the back of her son’s parka is made of sealskin scraps from old projects—so that her son can see that value in practice, Hovak said.

“I told him to remember to be proud and never be ashamed to wear fur, it’s part of our culture.”

But still, Hovak said she was surprised at her son’s mature response to the hateful comments that his photo prompted on Facebook.

“That’s something he taught me—he didn’t respond to any of the hateful comments he received. He just said he’s seen everybody come together and show support. So I was like, OK, he’s got it, he’s doing the right thing, for the right reasons, so I can support him 100 per cent.”

More than that, Hovak said she saw her son become a strong and much-needed role model for young Indigenous men when he put that parka on.

“We have so many youth struggling, especially males. There’s so much suicide, so many Indigenous males being incarcerated, we just need to see these strong Indigenous men do something positive and not be ashamed of carrying traditions proudly forward… I had so many tears, watching him. He’s done so much more than I expected. This parka has done so much more than I expected.”

Despite the negative backlash on Facebook, Hovak said her son showed that he is an “incredible kid with a strong, positive mind who cares for our culture.”

“As Inuit, there’s so much that’s been taken away from us, it’s so nice to see him hang on to our culture and embrace it.”

“My friends at school think the parka is pretty awesome. They think it’s pretty funny that I’m getting all this attention. It’s kinda funny and wild, really.”

Braden said he plans to go to university when he’s finished his final year at Sir John Franklin High School, where his mom said he has won an award for athlete of the year every year he’s been at the school.

But at this point, Braden doesn’t know what he wants to study and wants to “keep [his] options open.”

Tagaq, however, did respond with a statement to Nunatsiaq News:

Over the years it has become apparent that anti-sealers are not aware of Inuit culture or history, and where we sit on a socio-economic standpoint. To be against sealing is to literally be taking food out of children’s mouths. The isolation, the climate, and the colonial process (which included removing us from a nomadic lifestyle by killing off sled dogs and relocating families in order to claim the northwest passage) has cornered us into [a] capitalist environment. We must pay rent. We must pay taxes. We must feed our families. Grocery prices are high because the food is brought up by jet. The sociological ramifications of the residential school program have been the leading cause of trauma. We need money to improve our quality of life to alleviate the dismal statistics that we live under… To see healthy, fed, safe vegans judging us is highly unnerving and insulting. Yet we explain calmly.