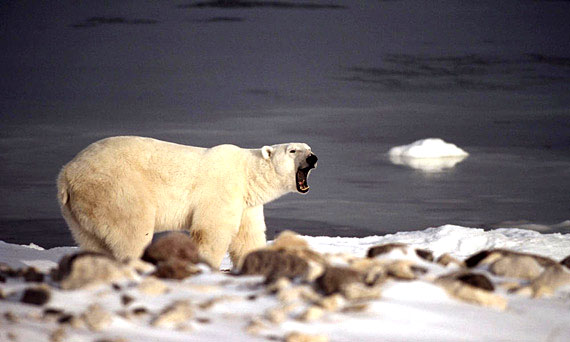 Following public hearings in Inukjuak last week, the Nunavik Marine Region Wildlife Board will send its recommendations to the federal government on how to manage the southern Hudson Bay polar bear population. (PHOTO COURTESY OF THE ONTARIO MINISTRY OF NATURAL RESOURCES)

Governments, Inuit organizations and hunters in both Nunavut and Nunavik have yet to reach an agreement on a management plan for polar bears along the east side of southern Hudson Bay, following the first set of public hearings focused on that sub-population.

But those groups can at least agree on one thing: they’ll continue to work together to co-manage their shared resource.

The Nunavik Marine Region Wildlife Board hosted the hearings in Inukjuak between Feb. 12 and Feb. 14 – a first, following a request by the federal government to come up with an annual harvest quota.

The meeting, which gathered officials from Nunavut, Quebec and Ontario, finally came together after a three-year delay, while groups waited for the results of aerial surveys carried out in 2011 and 2012.

The surveys pegged the southern Hudson Bay polar bear population at 951, suggesting the population hasn’t changed since the mid-1980s and is generally in good health.

Those findings support what Inuit birthright organizations in both Nunavut and Nunavik have said for years, although the two hold different views on how the southern Hudson Bay polar bear population should be managed.

In its submission to the hearings, Makivik Corp. says the Inuit of Nunavik are opposed to a quota system.

In Nunavik, Inuit have a guaranteed harvest level of 58 bears under the James Bay and Northern Quebec Agreement.

“When we fall into a quota system, it becomes individualistic,” Delisle Alaku said. “We don’t have a management plan, but we need to show that we manage without (quotas).”

“Sanikiluaq has been very successful — the [hunters and trappers organization there] seems to have a good handle on that plan,” said James Eetoolook, NTI’s vice-president. “Our feeling is that a similar system should be in place.”

NTI’s submission to the hearings called for a system that demonstrates “qualitative and quantitative limitations” that can be enforced.

Eetoolook says it’s vital to Inuit communities in both Nunavut and Nunavik to have a management plan in place ahead of the 2016 conference of the Convention on International Trade in Endangered Species of Wild Fauna and Flora (CITES), which will examine whether Canada is managing its polar bear populations sustainably.

“We don’t want to cut out the trade of polar bear hides outside of Canada,” Eetoolook said, noting that income generated from selling polar bear parts is important revenue for Inuit hunters.

“It’s important that all of us work closely together to have a good management plan in place,” he said.

A similar process will be required for polar bear populations in both Foxe Basin and Davis Strait, Eetoolook noted, although hearings have yet to be planned.

Makivik agrees that there must be a system in place to show the international community that Canada is managing its population responsibly.

At the same time, Makivik also warned the wildlife board not to be influenced by international pressure around the polar bear hunt.

“It’s complex, and this is a new process for Nunavik,” Delisle Alaku said. “I think hunters thought a decision could be reached right then and there, but that’s not how the process works.This will be an ongoing discussion and it’s not just between Inuit organizations, we need the [federal] government to guide us.”

Since 2011, in the absence of a quota system, a combined voluntary quota for the southern Hudson Bay polar bear population of 60 has been temporarily in place.

Twenty-six of those are allocated to Nunavik; 25 to Nunavut, for Sanikiluaq, while the remainder go to Cree communities.

While the Makivik Corp. signed off on the voluntary quota, Nunavik hunters said the decision was unfair, because the region has never before had strict regulations put on its polar bear hunt.

“[The voluntary quota] was supposed to be there for a year, but it’s carried over,” Delisle Alaku said. “There needs to be a better system.”

In its submission to the hearings, the Quebec government expressed concerns about the effects of global warming on the polar bears’ physical condition, suggesting a total allowable take of 44 bears from the sub-population.

The Nunavik Marine Region Wildlife Board is now tasked with processing all the submissions and comments it received.

The board will make its recommendation to the federal environment minister, which is then followed by a 60-day approval process.