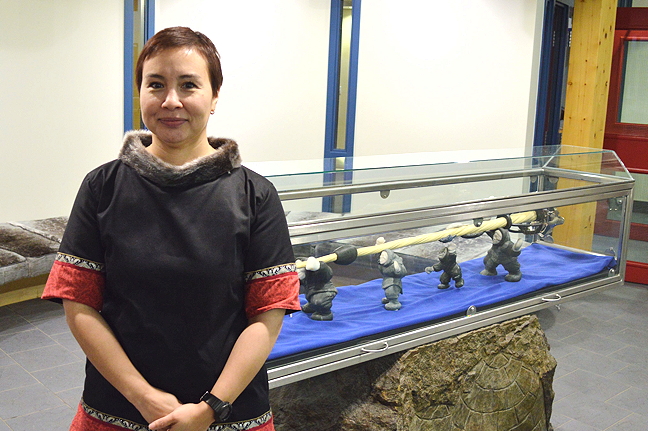 Sandra Inutiq, the Nunavut languages commissioner, during a break in a committee hearing at the legislature this past November. Her office’s final report into the Qikiqtani General Hospital in Iqaluit found numerous breaches of language rights held by Inuktitut and French speakers and makes 14 recommendations to fix the situation. (FILE PHOTO)

A new report by the Office of the Languages Commissioner of Nunavut says Inuktitut and French-speaking patients at Iqaluit’s Qikiqtani General Hospital face language barriers that could be putting their health at risk.

Between 2000 and 2011, the languages commissioner’s office received six language-related complaints regarding access to health care at the hospital, jobs or a travel escort. Three came from Inuit patients and another three from francophones.

That spurred an investigation by the office, which looked at the availability of French and Inuktitut services at the Qikiqtani General Hospital between March 2012 and March 2013.

The report, completed last October but only released May 10, found no known language policy or plan in place at the hospital leaving the vast majority of services available in English only — to the detriment of Nunavut’s other official language speakers.

In one of the complaints the language commissioner’s office looked into, an elderly Inuk man with breathing difficulties sought treatment at the hospital.

“The patient met with a doctor and, because the conversation was held in English, he didn’t understand some of the questions,” the report detailed.

“He asked the doctor to repeat and the doctor subsequently became irritated and berated the patient. When the patient asked him why he was upset, the patient said the doctor answered: ‘I can’t understand you, I will send you someone else,’ and he left, leaving the patient alone with his breathing problems.”

In another case, the report describes the experience of a French-speaking couple expecting a baby. The couple did most of their consultations at the hospital in English, although they had trouble understanding some medical terms.

“During birth, the mother was told in English that she would have to have a C-section delivery,” the report said.

“She did not understand the English term C-section (short for Caesarean) and what was going to transpire. Thirty minutes later, she was in the operating room for the procedure. As her husband was not allowed to be present, he was unable to help her understand what was happening. The patient said she was in shock, confused and very vulnerable.”

Those are just a few examples of problems faced by Inuktitut and French-speaking patients at the Qikiqtani General Hospital, a regional hospital that serves a population of more than 18,000 across the Baffin region.

But Nunavut’s languages commissioner, Sandra Inutiq, said that needs to change, and Qikiqtani General Hospital must offer a quality of care equal to what it offers its English-speaking patients.

“Inuit and French language communities must be offered and receive health care in the official language of their choice, in order to clearly explain their pain, understand professionals’ questions and the diagnosis, follow prescribed medications and properly follow recommended treatment,” Inutiq said in a May 10 release.

Among 14 recommendations issued in the offices report: The Qikiqtani General Hospital should develop a language plan, with directives, and make employees aware of patients’ language rights.

Another recommendation suggests that Nunavut’s health department establish standards for interpretation, to ensure translation is available to patients at all times.

The report found that the hospital employs six Inuktitut-English clerk interpreters, and no French-English interpreters — but more often, members of the public are asked to help interpret.

In one case, a staff members interviewed in the report described another patient being called on to translate when no interpreters were available.

“At times, there is nobody in this building that speaks Inuktitut,” said another staff member. “We don’t function well when we don’t have someone. This year, it has been very bad, at the point we only had one interpreter.”

In response to the office’s recommendations, Nunavut’s department of health committed to develop a language plan, work to increase the number of bilingual staff at the hospital and to enroll employees in a medical terminology course through Nunavut Arctic College.

You can read the full report, and the GN’s response below.