Inuktut language group to meet with Prince of Wales

Group will tour Wales to learn about region’s language revitalization 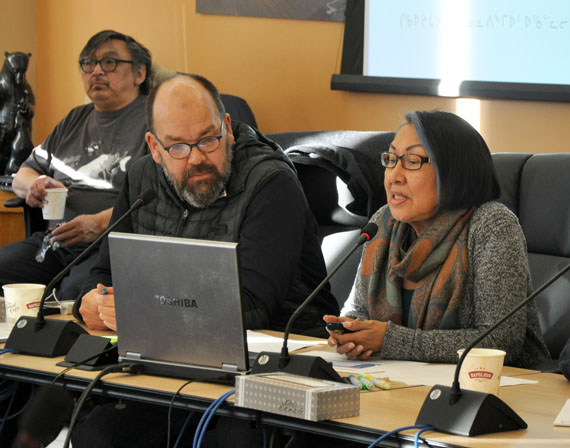 Robbie Watt and Monica Ittusardjuat of the Atausiq Inuktut Titirausiq language group speak to KRG councillors in Kuujjuaq last week. The group has been invited to visit Wales to learn about that nation’s language revitalization efforts. (PHOTO BY SARAH ROGERS)

Harry Tulugak jokes about how he’ll greet Prince Charles when he meets him.

His Royal Highness the Prince of Wales might not understand Inuktitut, but he’s taken an interest in the plight of the Inuktut language—enough to invite a group of its speakers to the United Kingdom to learn more.

Tulugak and the members of the Atausiq Inuktut Titirausiq language task force are heading to Wales later this week, at the invitation of the Prince’s Charities Canada, which has taken an interest in endangered languages around the world, namely Welsh, Gaelic and Maori.

Inuit Tapiriit Kanatami and the Prince’s Charities Canada have partnered to bring the group to Wales for a five-day tour of some of the nation’s cultural institutions that have aided the revitalization of the Welsh language, said Robbie Watt, another Nunavik member of AIT.

“We’ll be taking a look at what they’re doing there, and how they take back their language,” Watt told Kativik Regional Government councillors in Kuujjuaq last week.

Part of the tour will include a stop at Canolfan Bedwyr’s language technologies unit at Bangor University and the Welsh Language Commissioner’s office.

The tour will wrap up with a roundtable with the Prince at his Welsh residence, Llwynywermod.

The visit comes as AIT has proposed a shift to Roman orthography to standardize all written Inuktut across the country.

ITK will consider a proposal on spelling principles and a timeline for the plan’s implementation in 2017.

AIT members note the group has had to make compromises with different regions where the use of syllabics is stronger, like Nunavik, and with an older generation of Inuit who’ve been more resistant to change.

“Your grandchildren will be using this system, and they’ll be able to start reading English faster too,” Watt told councillors.

There will be some disadvantages, Watt noted, such as the loss of certain sounds common to Nunavik’s dialect, for example.

“But this is going to make our language stronger,” he said.

Inuit youth, the group most impacted by the loss of Inuktut, are also the most supportive of the change, AIT said, along with teachers, who would be tasked with implementing new language standards.

“If they had their own writing system, Inuit would be able to continue on with their education system, and it would make our culture and language stronger,” said Monica Ittusardjuat, ITK’s language coordinator, during a visit to Kuujjuaq last week.

“And it would make us more unified and help us out in healing, as a people.”