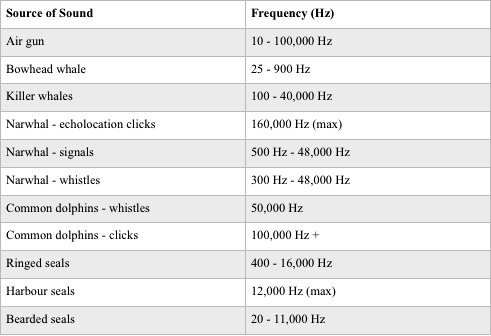 From the aural click of a narwhal to the air gun of oil survey ships, a variation of sounds coexist underwater.

While we wait for the upcoming 2015 seismic survey to take place at Baffin Bay and Davis Strait, Nunatsiaq News compared the sound people and marine mammals make under the sea and examined some of things the seismic company will have to do to mitigate the project’s impact.

Marine mammals use sound to communicate. It is how they sense food, danger, other animals, their own position and reproductive or territorial status, according to United Nations Environment Programme’s 2012 Scientific Synthesis on the Impacts of Underwater Noise on Marine and Coastal Biodiversity and Habitats.

Different groups have been trying to understand how human-made sound affects the lives of creatures underwater. But gaps remain, the UNEP report states.

To begin with, there is a lack of consensus around defining marine acoustics: “A particular sound can… be noise to one receiver and a signal to others,” the report says.

How sound travels underwater is affected by many things including the frequency of the sound, water depth, and density differences within the water column — which vary with temperature and pressure — according to the UNEP report.

Because of these unknowns, the report suggests, “precaution in the face of uncertainty is rational.”

The National Energy Board’s environmental assessment report on this project, located in its website here, notes that many marine species, including mammals, birds, fish and marine invertebrates could be impacted by the air guns including:

• avoidance of air gun sound, potential impact on migration; and,

Among efforts to keep marine habitants safe for this particular project off Baffin Island, the NEB will require Multi-Klient Invest to create a 500-metre radius exclusion zone, and a gradual increase of the airgun’s volume at start-up — requirements listed in MKI’s environmental assessment report, located here.

Other mitigation efforts include:

• powering down the airgun during transition from one testing area to another;

• maintaining a steady constant speed of five knots while surveying; and,

• maintaining a 12-km buffer zone between seismic testing and the Nunavut territorial boundary.

“The board recognizes that no individual mitigation measure would be able to completely eliminate adverse effects to marine mammals, nor would any individual measure be infallible,” the NEB notes in the assessment report.

“However, collectively, the mitigation measures above would minimize the possibility of marine mammals occurring in close enough proximity to the airgun discharges such that they would suffer permanent or temporary hearing damage or behavioural changes.”

When contacted via email, NEB communications officer Tara O’Donovan said the proponent, “is required to follow through on ALL of the proposed mitigation measures outlined in the Environmental Assessment Report.”

Bearded and ringed seals are known to avoid an area within 250 metres of a seismic survey, while beluga whales are unlikely to interact with the proposed survey, according to an Environmental Impact Assessment filed by ConocoPhillips Global NVE Greenland Ltd.

This assessment was part of a series of documents filed by Petroleum Geo-Services — MKI’s owner — to the NEB in 2013.

During the ice-free season, Baffin Bay and Davis Strait are frequented by narwhals, belugas, and bowhead whales, ringed and bearded seals, and walruses, according to those documents.

As for what marine mammals might feel, swimming under water during seismic surveys, Lorenzo Scala, project manager for Seiche Measurements Ltd’s fisheries research and development project makes it understandable for humans.

“It can be likened to attending a concert with loud music,” she said, via email.

Apart from the struggle to communicate effectively during concerts, Scala said one hears less for a time afterward.

However, “over a long period of exposure, our hearing ability is likely to be impaired permanently, and as such, ear defenders are often required… for work in areas where sound exposures are high.”

Groups from Clyde River challenging the seismic survey, proposed to take place in Baffin Bay and Davis Strait in 2015, were expected to have all their evidence into Federal Court of Appeal by the end of August, said Nader Hasan, partner of the company coordinating the litigation — Ruby Shiller Chan Hasan Barristers.

The earliest the groups can ask for a court date is after written arguments are filed by respondents, Hasan said. “It could be December or January or February — it’s up to the court to decide,” he followed by email.

You can find a host of public documents filed with the NEB on this project here.