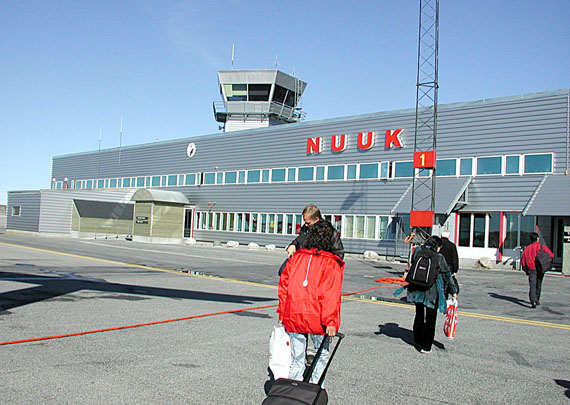 The airport at Nuuk, Greenland. After June 15, you’ll be able to fly direct from Iqaluit to Nuuk and back on Air Greenland. (PHOTO BY JANE GEORGE)

Soon people in Iqaluit will regularly spot Air Greenland’s bright red airplanes flying in and out of the city’s airport.

Flights between iqaluit and Nuuk, scheduled for Mondays and Fridays, will start June 15 and run until Sept. 3.

The flight will last about an hour and 45 minutes to Nuuk. That’s about three days shorter than the route you now need to take, from Iqaluit to Ottawa, and then to Nuuk via Copenhagen or Reykjavik.

With the new flight, it will take less than six hours to get from Ottawa to Nuuk, said Air Greenland chief communications spokesperson Christian Keldsen.

The service will be extended beyond the 11-week trial period if the demand is great enough, he said.

Air Greenland and First Air plan to work on a code sharing system for the new flights. This means that each company will share the same flight, but operate under one aircraft. This will allow travellers orginating in Canada to book flights from major Canadian cities to Greenland in one booking, or for Greenlanders to fly directly to southern Canada.

Flights from Ottawa many now be made to Nuuk under one booking.

But passengers will have to switch planes from First Air to Air Greenland once they’re in Iqaluit.

And although the demand for passenger flights from Iqaluit to Nuuk isn’t as high as Air Greenland had been hoping, Keldsen said business will definitely pick up in mid-summer when mining companies receive permits to explore in Greenland.

“We’re pretty confident there will be a need for this route,” Keldsen said.

The Nuuk airport has “more or less everything in place” for the new flights coming in, he said.

Ed Picco, First Air’s director of government affairs in the eastern Arctic, said the Iqaluit airport is ready to supply the customs checks that will be required for passengers flying in and out of Canada.

“The Canadian Border Services Agency has an officer for customs, and that is in place here in Iqaluit, as it is an international airport,” said Picco.

This is the first time since 2001 that there’s been an air link between Nunavut and Greenland.

In 2001, First Air stopped their weekly jet service between Iqaluit and Kangerlussuaq.

Air Greenland was scheduled to begin a route between Nuuk and Iqaluit in 2010, but those plans were dropped.

An earlier attempt to establish jet service between Greenland and the United States in 2008 also failed.