“This is a major building fire, fire loss is extensive here” 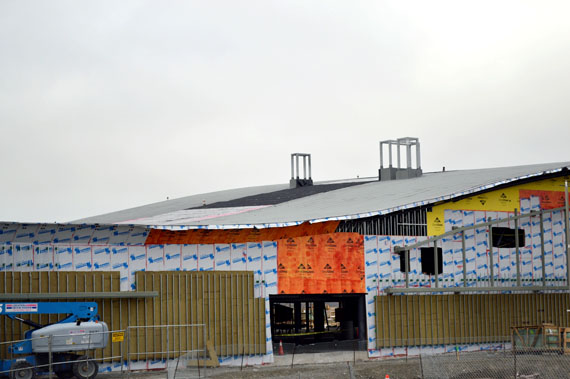 By Sept. 7, workers employed by Bouygues Building Canada Inc. and its sub-contractors were back on the job at the partially constructed new Iqaluit air terminal, where a roof fire broke out on the evening of Sept. 5. Iqaluit’s fire chief says the fire inflicted at least $1 million in damages. (PHOTO BY STEVE DUCHARME)

By the time firefighters were able to bring the fire under control — 44 minutes after being called to the scene — about nine per cent of the 100,000-square foot roof had burned, the fire chief added.

But Grandmaison credits the quick, collaborative response by the city’s fire department, the airport’s firefighters and others for quickly putting the fire out.

An off-duty firefighter called in the fire at 7:22 p.m. Sept. 5, Grandmaison said, and the fire chief immediately contacted the airport’s firefighters.

That’s because Grandmaison said he knew right away that this fire would be a “class B” fire, meaning the blaze involved a combustible liquid instead of ordinary combustible material like wood.

“The roof is made of material that is a petroleum product… That’s a solid, but when it’s heated it becomes a liquid, and that liquid is combustible,” the chief said.

The burning petroleum-based liquid is what caused the large plume of dense black smoke seen all over Iqaluit, he added.

And the airport’s two fire trucks are designed to deal with fires of combustible liquids.

“When an airplane crashes, what spills out is a flammable liquid, so a class B fire,” Grandmaison said.

The airport’s fire trucks douse fires with a mixture of water (96 per cent) and a specialized foam (four per cent), the fire chief said.

When Grandmaison arrived on the scene, airport and municipal firefighters were already sizing up the fire.

Grandmaison said he then gave an order for the airport vehicles to try to “knock the fire down,” but that attempt was unsuccessful because the angle between their trucks and the fire wasn’t quite right.

When the airport vehicles ran out of their water supply, they had to leave to replenish their reservoir.

In the meantime, more firefighters were arriving, as well as other municipal workers from the public works department, Grandmaison said.

Grandmaison directed the city staff, and even some of the airport construction workers, to begin running a hose line from the fire hydrant, into the airport and up a set of stairs to gain access to the roof.

It took over 1,000 feet of hose and two pumps to supply the crew of firefighters stationed on the roof with water, the fire chief said.

From that point on — and thanks to the concerted effort on the ground and on the roof — the fire was quick work, Grandmaison said.

“As soon as [the airport fire trucks] were able to reposition themselves to hit the base of the fire, that made the fire go out,” the chief said.

The curve of the roof helped the effort because water ran down and pooled near the flames, he added.

And the crew on the roof continued to extinguish hot spots and bring the fire under control.

In total, Grandmaison said all of the city’s 17 firefighters responded to the call, along with two municipal fire trucks — including an aerial ladder truck — two airport fire trucks, two ambulances and a number of other municipal vehicles.

“I’m proud of all of us, that only nine per cent of the roof burnt in what I classify as a major building fire.”

“The key to putting the fire out was the airport firefighting vehicles, because they can discharge the water load with foam by one person.”

The Government of Nunavut issued a news release Sept. 6, saying that the private firm responsible for the design and construction of the airport will assess whether or not the fire will delay the terminal’s projected completion date.

The GN said the fire is not expected to raise the territory’s contribution to the terminal construction—that cost, presumably, will be absorbed the private firm, Bouygues Building Canada Inc., a Canadian subsidiary of a French multi-national corporation.

That company will build and operate the airport for the next 34 years at a cost of $418.9-million — the single biggest infrastructure project in Nunavut’s history.