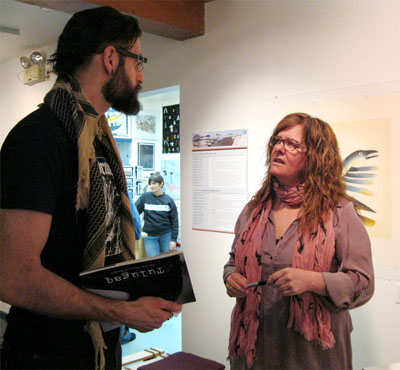 Kerry McCluskey chats with a book-buyer at the launch of Tulugaq: An Oral History of Ravens, her collection of brief legends, fables and anecdotes about Arctic ravens, at Iqaluit’s Nunavut Sunakkutaangit Museum on Nov. 23. (PHOTO BY PETER VARGA)

Fifteen years of work chronicling myths, tales and legends about the North’s most notorious trickster came to a happy end for Kerry McCluskey of Iqaluit, Nov. 23, with the release of Tulugaq: An Oral History of Ravens.

The first-time author launched her book at Iqaluit’s Nunavut Sunakkutaangit Museum to a crowded audience, who quickly snapped up copies of her 95-page collection of brief stories and anecdotes about Arctic ravens.

“It’s surreal,” McCluskey said between requests for signed copies. “After carrying this around in my heart and my head for so many years, to actually see a room full of people buying and holding it, it’s quite something.”

McCluskey, 45, started her project shortly after making Iqaluit home in 1998.

She was quick to tell her audience that the book “belongs to our northern community.”

Tulugaq is truly that. Even though the book takes its title from the Inuktitut word for “raven,” the stories and anecdotes in McCluskey’s compilation, richly illustrated with photos of the cunning bird engaged in various antics, were collected from 15 years of interviews with aboriginal elders and northerners across the Arctic

Arts grants and travel assistance allowed McCluskey to travel across from Nunavut to Alaska and work on the book when time off work permitted, she said.

“It took me from Arctic coast to Arctic coast,” she said. “I went to so many communities — to Iqaluit, to Arctic Bay, Rankin Inlet, Kugluktuk, Inuvik, Whitehorse and Skagway, and Alaska.

“I was blessed to interview dozens of northerners, including Inuit and Dene elders.”

The long-running project began during McCluskey’s first few weeks in the North in 1993, she said, during off-hours from a waitressing job in Yellowknife.

Freshly arrived from Ontario, the recent university graduate was caught in a bout of homesickness at her boarding house, when she heard the phone ring.

“I ran to answer it, and there was nothing there — not even a dial-tone. It was very strange. This went on for a week,” she said.

“Then one day, I picked up the phone,” McCluskey recalled. “I look outside, and there was a tulugaq in the tree, just outside the window — and it had learned to mimic the phone. And I was hooked — it was just love at first sight.”

The Iqaluit resident recalled telling the story to others, and was surprised to find many had odd raven stories of their own.

“It just kept going on and on, and I thought wow — there’s really something here.”

McCluskey, who also worked as a newspaper journalist in the Northwest Territories and Nunavut, searched but failed to find a published collection of northern raven tales. That’s when the idea to record the stories for a book took hold.

The result, after almost 100 interviews and hundreds of photographs, is a collection of 69 stories in Tulugak.

Most recount stories, much like fables and myths of Western literature, told from generation to generation among Inuit, Dene and other aboriginal peoples of the North.

Others tell more recent quirky anecdotes out of the North’s three capitals and smaller communities – such as ravens terrorizing or outwitting other animals and humans, and taking or providing cues to hunters, campers and prospectors on the land.

The book was hardly enough to fit all stories and photographs McCluskey pulled together over the years.

“Not all of them are in the final product,” she said, which is why she created the website tulugaq.com where readers can find more intriguing stories and photos.

Published by Iqaluit-based Inhabit Media Inc., Tulugaq: An Oral History of Ravens is sold in Iqaluit at Arctic Ventures, and online through Amazon.ca and Chapters-Indigo.