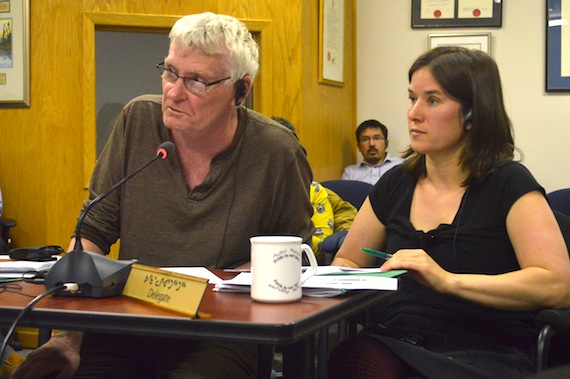 At the July 26 Iqaluit city council meeting, Nunavut Brewery partner Ambrose Livingstone, flanked by the city’s planning and development director Mélodie Simard, give councillors details of the 609 square-metre facility, which will be located on Iqaluit Lane near the borders of Sylvia Grinnell Territorial Park. (PHOTO BY STEVE DUCHARME) According to the project proposal, the brewery will be off of Iqaluit Lane, near the border of Sylvia Grinnell Territorial Park. The location, Livingstone explained to council, is ideal to draw water from the river to brew beer. It takes about six gallons of water to produce one gallon of beer. (PHOTO BY STEVE DUCHARME) The blue, green and yellow colours on the Nunavut Brewing Co. facility were decided after consultations with the Sylvia Grinnell park authority. (PHOTO BY STEVE DUCHARME)

Locally brewed suds are another step closer to reality after Iqaluit city councillors gave partners in the Nunavut Brewing Co. Ltd. the green light July 26 to develop their beer facility on the outskirts of the built-up area of town.

Council’s approval is the latest lap in a gauntlet of red tape navigated by the brewery entrepreneurs over the last year, when they first sought approval from the city to approach Nunavut’s Liquor Licensing Board in 2015, followed by meetings with the Nunavut Impact Review Board and the Nunavut Water Board.

Brewery partner Ambrose Livingstone, flanked by the city’s planning and development director Mélodie Simard, gave councillors details of the 609 square-metre facility, which will be located on Iqaluit Lane near the entrance to Sylvia Grinnell Territorial Park.

“It would be one of the last lots adjacent to the park. The applicant made special care to choose building colours that were considered acceptable to the park authority” Simard of the proposed building’s green, blue and yellow colour scheme.

Simard and Livingstone said the proximity to the park is no coincidence, because brewery operations require more water than city infrastructure can currently provide.

According to project details provided to the city, the brewery needs about 10,000 litres of water per day to operate.

But city resources can only provide for 2,000 litres per day of trucked water — equivalent to five households, Simard explained.

The remaining water will be drawn from the Sylvia Grinnell River and Lake Geraldine: Iqaluit’s main source of potable water.

Livingstone said Lake Geraldine is an alternative to drawing from Sylvia Grinnell River, in case weather prevents the company’s private water truck from reaching the river in winter.

“We have permission from the Nunavut Water Board to use the Sylvia Grinnell River, but we’re concerned that we may not be able to get there 12 months a year, because the road gets plugged,” he explained.

The city’s water and sewage service will only be used for the building’s standard operations and not the brewing of beer, Livingstone said.

Redfern noted that the additional draw on Lake Geraldine might exceed the lake’s capacity, citing a study that said Iqaluit’s population would outgrow the lake by 2017.

“Has Public Work’s factored in what that potential affect will be on what the community needs?” she asked.

“I can’t say we’ve had that discussion,” Simard responded, but seemed to indicate the city’s 2,000 litres per day service to the brewery would be negligible.

Nattaq asked Livingstone if his company considered the consequences to fish populations at the lake and river.

Livingstone quipped, “We’d like to make enough beer to drain the river if we could,” but went on to say, “that’s not going to happen… There’s probably more water going over the falls in two minutes than we would take in two years.”

Once operational, Livingstone said the brewery could redirect “hundreds of thousands of dollars leaving Iqaluit every year from purchasing beer from southern producers.”

“We have an opportunity to change that,” he said, adding that the brewery would create a number of jobs within Iqaluit.