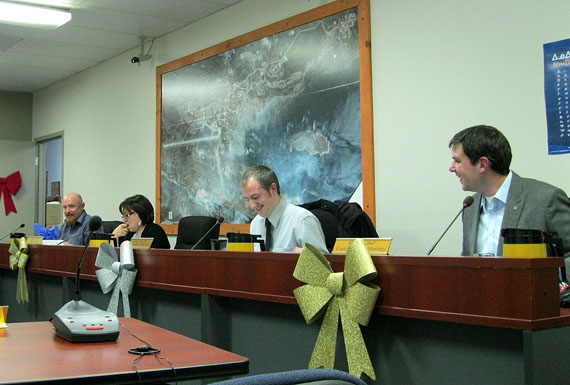 Iqaluit city councillors Mary Wilman, Kenny Bell and Mark Morrissey (far right) led a motion to take the city’s proposed waste site back to committee, to include plans for a garbage incinerator. Councillors Terry Dobbin and Noah Papatsie made the vote 5-2 in favour. (PHOTO BY PETER VARGA)

Iqaluit City Council stopped just short of adopting a new solid waste management plan Dec. 10 — because it does not include plans for an incinerator.

In its two years of development, despite descriptions of the project proposal to the public in three open public consultations, three newsletters sent to residents, and a website about the project, council would not be convinced that project could pass without a commitment to include an incinerator.

“We wanted incineration right from the start,” councillor and deputy mayor Mary Wilman told Meagan Leach, the city’s director of engineering and sustainability, at the council meeting.

“I’ve read through the information. My feeling is, I simply cannot support this plan without an incinerator.”

At the council’s urging, the city’s department of engineering recently added a commitment to include a “technical component” for a garbage-burning facility in its waste management plan for the year 2018.

“I want to approve this plan, with an incinerator in mind for 2014,” Wilman said.

“For me as a councillor to be totally comfortable, I think it’s not right of us to proceed with this, in this day and age, and to wait five years,” Wilman said.

“I think we’re just going to put ourselves into a more complicated situation, because of the unforeseen costs associated with that.”

“There were some concerns with emissions or whatever back then,” he said, referring to fear of pollutants. “But these days, emissions are relatively safe.”

“I can’t support another garbage dump,” Dobbin said. “And I don’t see any true options here. So I cannot support the Northwest site.”

The proposed $9 million site, located 8.5 kilometres northwest of the city centre, would include composting, separation of recyclable material and hazardous waste, as well as a re-use centre and end-of life-vehicles program.

The city’s department of engineering recommended the site, and associated plan for separation of waste materials, as the most cost-effective option.

One of three alternative proposals included incineration. This option was ruled out, mainly due to high costs and lack of information about incineration systems.

The department estimated an incinerator system would cost $13.8 million to set up, and estimated its operating costs at more than twice that of the preferred “open windrow compost” option.

“I’m a little concerned about timelines, in terms of moving forward and getting a new site up and running,” Leach told council.

In past meetings, Leach highlighted that the city was overdue for a new waste disposal site. The proposed Northwest site would open in in 2015 at the earliest, after technical designs are completed in 2014.

The plan before council “is not necessarily in competition with the idea of incineration,” she said.

The proposed plan separates hazardous and other forms of waste that cannot be burned, which is a necessary requirement for an incineration system.

“We could choose to move the incineration analysis up, earlier in the timeline,” Leach said.

Leach’s main concern, she said, is that adding an incinerator to existing plans “will delay design and engineering work that needs to happen to get the new site up and running.”

“Technical analysis,” the first stage of work needed to include an incinerator, would cost roughly $500,000, she said.

Councillors in favour of including a garbage burner into the plan emphasized that the city has many competing priorities.

“Nine million dollars to build this, and saying we’re going to need another $5 million for an incinerator, five years down the road? I just don’t see it happening, to tell you the truth,” Dobbin said.

Coun. Simon Nattaq said the plan sets the right foundation for a new waste site, although he doubts that composting can work in the Arctic.

He added that the city could never incinerate garbage from the current waste site, which contains a mix of materials — including hazardous waste — in an ever-growing heap.

“If this motion [to adopt the new waste plan] doesn’t go ahead, we will have to wait many more years,” Nattaq said. “And we can’t afford to.”

Council passed a motion to take the proposal back to the engineering committee of the whole for discussion. Five councillors voted in favour, two against, and one abstained.