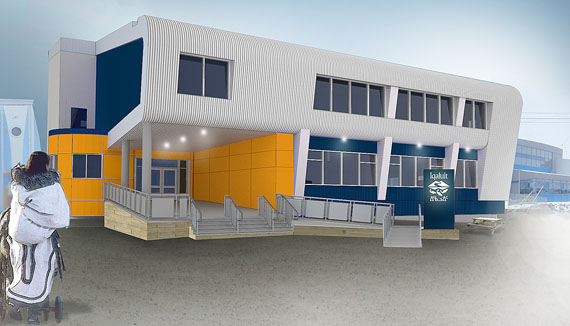 Iqaluit’s new Aquatic Centre will go up next to the city’s Arnaitok complex, left, and opposite the Nunavut Court of Justice, right. The $34 million centre, seen here from the front entrance, will include a six-lane 25-metre pool, a leisure pool with water slide, a whirlpool, saunas and a fitness centre. (IMAGE FROM STANTEC AND CITY OF IQALUIT)

The City of Iqaluit’s Aquatic Centre will cost a total of $34 million, to be financed by two loans. Council approved a $26.5 million long-term debenture loan from Canada Life Assurance Inc., March 11. Construction begins in April. (IMAGE FROM STANTEC AND CITY OF IQALUIT)

The City of Iqaluit pegged the final cost of its new aquatic centre at $34 million, $6 million less than the $40 million that Iqaluit property-owners allowed the city to borrow in a ratepayers’ referendum in 2012.

The centre, to be located next to the Arnaitok Complex, will cost $30.18 million to construct.

An additional $3.82 million in costs will include a $1.81-million contingency fund, in addition to money to pay for furnishings, fixtures, equipment, and legal fees, said Amy Elgersma, the city’s director of recreation.

Elgersma is co-chair of the REACH Fundraising Campaign, which seeks to raise $3 million in funds for the new centre through local fundraisers, donations, and corporate sponsorship.

The other co-chair is Dennis Patterson, senator for Nunavut.

Both attended a council meeting March 11, at which council approved a primary loan, or debenture, of $26.5 million from Canada Life Assurance Co.

A debenture is a legal document that sets out the terms of an unsecured loan.

The Canada Life debenture loan is at a fixed interest rate of 5.4 per cent and is to be repaid over 22 years in specific amounts according to a set schedule.

This will be covered by using a “combination” of reserve funds dedicated to the project, “savings incurred from the old swimming pool, savings from the completion of the lease-to-own arrangement of the curling rink, and funds raised by the REACH Fundraising Campaign,” the City of Iqaluit said in a news release March 13.

“The fixed interest rate for the life of the loan allows us to take advantage of current low interest rates and ensures stability,” Mayor John Graham said.

A second loan of $7.5 million will cover the remainder of the $34 million project cost.

The city said this will come from a “secondary source,” but did not say where.

“We think this is really good news, that we only have to borrow $34 million,” Elgersma told Nunatsiaq News.

City council’s effort to limit property taxes in the 2014 budget does not affect financing for the aquatic centre, Elgersma said.

Council ordered administration to cut non-essential expenses from all departments — including reserve funds — during this year’s lengthy deliberations.

Construction of the centre begins in the spring, Elgersma said, when work crews will install piles for the building’s foundation.

“We’re still working toward the May 2016 date for completion,” Elgersma said.

Meanwhile, REACH fundraising efforts continue. The campaign has raised more than $300,000 of its $3 million target so far, Elgersma said.

“We’ll have some more coming pretty soon,” she promised, adding that the REACH committee will announce in April how much closer they have come to their target.

Ratepayers gave the city the go-ahead to borrow up to $40 million to finance the project during a referendum held Oct. 15, 2012, when 227 voted in favour and 172 against the proposal.

The referendum was held at the same time as the last municipal election. Two councillors who won seats in that election strongly opposed the project’s costs.

Councillors Kenny Bell and Terry Dobbin have repeatedly voiced their opposition to paying anything close to $40 million for a new swimming pool, in spite of the referendum result.

Both have pointed to the state of the city’s infrastructure to make their case. Bell has consistently voted against motions to advance plans and financing for the facility.

Graham said the city made a consistent effort to cut back on project costs, under orders from the current city council.