Iqaluit council: incinerator must be built now, not later 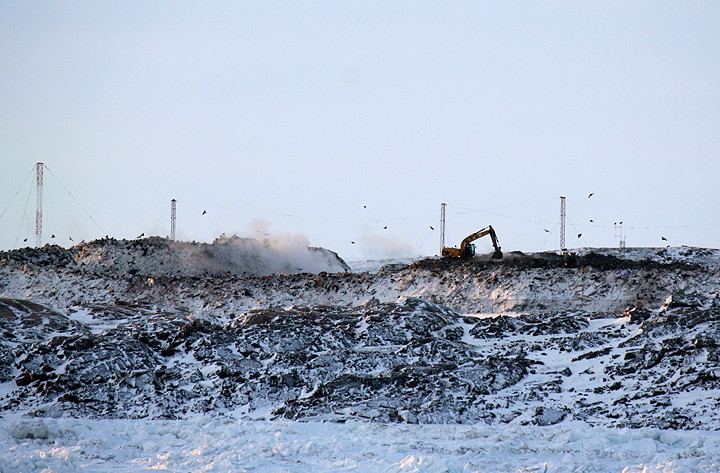 Iqaluit’s West 40 garbage dump – pictured here Dec. 12, after the city contained a fire within the waste pile – is overdue for replacement. City council plans to include an incinerator at the community’s next waste site, which is expected to open in 2015, at the earliest. (PHOTO BY PETER VARGA)

Iqaluit City Council has ordered that an incinerator immediately be included in the city’s new waste management plan, to be commissioned when the next waste site opens.

The Jan. 21 decision advances council’s demand for an incinerator by one year, to 2015 at the earliest.

Council also held off on accepting the waste plan’s composting element, ordering that the city’s department of engineering redraft the plan to “phase in” composting only on the condition that it is proven to work in Iqaluit.

With that, council sent the city’s director of engineering, Meagan Leach, back to the drawing board to redraft the city’s solid waste management plan, which it stopped just short of adopting on Dec. 10.

Council’s order to include incineration within the plan now means garbage collection fees will have to increase by about 63 per cent, instead of just 30 per cent as called for under the original solid waste management proposal, according to Leach.

The increased fee would cover the cost of an incinerator, which is estimated at about $5 million. The total cost of a new waste site, with incineration, would be about $14 million.

“Obviously you can choose to split that over different years, or over different funds,” Leach told council. “But it certainly has to be planned for.”

Leach cautioned that council’s late changes to the city’s solid waste management plan would add much more work and costs to the project, while the city’s past-due West 40 landfill continues to receive the city’s garbage.

“We need to have this project up and running as soon as possible,” Leach said. “We’re adding a lot of work so that it’s going to be a very large undertaking for staff. We already have a lot of large projects on the go. I’m concerned about frontloading so many things.”

The federal agency, which administers the Nunavut Waters and Nunavut Surface Rights Tribunal Act, had called on the city to submit its waste plan by Nov. 30, 2013, Bell said.

“It’s been in the hands of administration, and they have apparently been working towards a fix,” Bell said.

The problem, he added, is that he and other city councillors did not know anything about the deadline until Jan. 14, when council learned about it in an in-camera meeting closed to the public.

City administration’s rush to push the project through almost squeezed out council’s ability to call for an incinerator to be included in the project, he said, adding that councillors, like many citizens, have always favoured incineration.

“I’ve believed that this has been rushed since the beginning,” he said.

“I feel that we’re not being fed adequate information,” she said. “I’m not pointing fingers, but I am very frustrated, because this council is not really respected.”

Iqaluit’s department of engineering completed a project proposal after two years of work, which included information presented in three public consultations, three newsletters to residents and a website describing the plan’s progress.

Despite this, councillors said they were dismayed that the final draft, put to council for approval, did not include an incinerator.

“We’ve got to keep the stuff out of the landfill site, and incineration is, in my opinion, the most appropriate way,” said Coun. Terry Dobbin.

“The key is diversion,” Dobbin said, adding that without an incinerator, he feared that the Northwest site “is going to be just another landfill.”

Plans call for the Northwest site to include composting, separation of recyclable material and hazardous waste, as well as a re-use centre and end-of life vehicles program.

Coun. Bell said he doubts that composting would work in Iqaluit.

“Personally, I would like to see composting tested out,” Bell said. “We haven’t been provided with information that says that it actually works.”

Other councillors agreed. With that, they decided on a “phase-in” approach to composting, on the condition that it is proven to work in the community.

Leach will adjust the city’s waste management plan and present it to council for discussion at the next council meeting, Jan. 28.