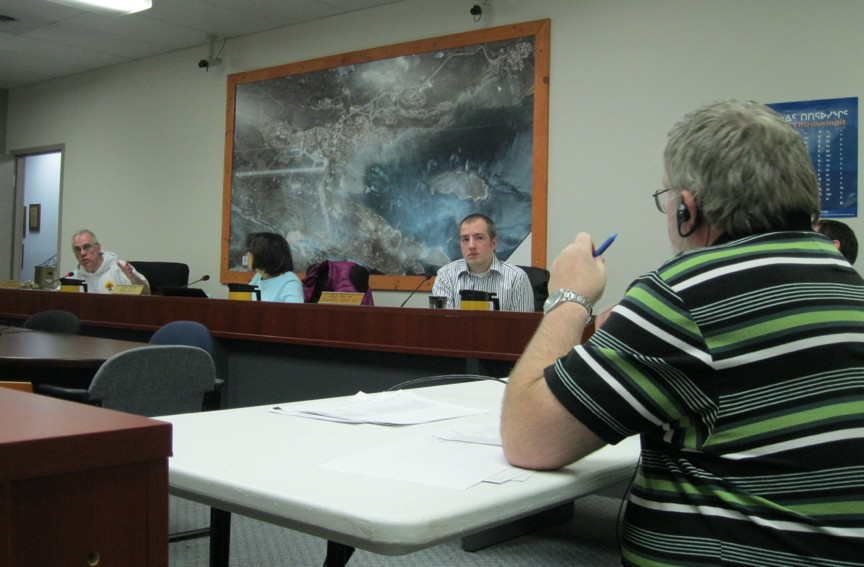 Iqaluit mayor John Graham, left, puts a question to Keith Couture, right, director of public works, on Jan. 10, the second day of discussions on the city’s budget for 2014. (PHOTO BY PETER VARGA)

Iqaluit’s director of public works says the city should brace itself for the start of the Mary River iron project in north Baffin, because it could draw qualified public works staff away from the city.

City councillors at the meeting said they’re concerned about possible staff shortages in the public works department, and asked Couture if more money should be budgeted for additional staff for road maintenance and repairs.

“What we need is not just staff — we need trained staff, which is a different thing. We’re trying to upgrade our operators,” Couture told council. “I’m trying to get a bigger pool of trained people.”

The director pointed to other difficulties his department faces, related to shift work and the narrow window of opportunity to in the summer for repair work, which amounts to just two months.

“You’ve got to get trained staff. You’ve got to get staff that know the city,” said Couture, who took the job in mid-2012. He came to Iqaluit with more than 30 years’ experience with municipalities in Ontario, mostly in the north of the province.

“It’s taken me a year or more to finally know where the roads are, with the numbering system and all that,” said Couture. “And the drivers have to know that too. Its an education, from both perspectives, from management and the fact that we’ve got to get people and offer them the opportunity to advance here with the city.”

Mayor John Graham and Coun. Kenny Bell said the department’s priority should be the upkeep and improvement of the city’s roads.

“Our roads are in major disrepair, and we need to at least start correcting that. And [added] staff will help with that,” Bell said.

Bell described poor staffing of road crews as “a massive failure by this council — and it has been for 40 years.”

Couture highlighted that, in addition to a staff training program in the works with the city’s training director, he is drafting a public works plan tailored specifically for Iqaluit, which will give clear guidelines on maintenance of roads, signage, snow removal, and staff hiring.

“The plan is my vision of what the city needs, and I’m trying to put it into play,” he said. “If it’s not written down, nobody wants to do it.

“I want it so that if I ever leave, here’s the book. Here’s the way it should be done,” Couture said. “It’s going to be cut and dried. We will still have to make decisions, but the majority of what we do will be written as policy.”

The director said his goal is to have a complete set of guidelines ready for the city “within a year.”

Coun. Simon Nattaq agreed on the importance of guidelines unique to the city, noting that Iqaluit’s roads are built on soils not found in other parts of Nunavut.

“The subsoil is not frozen hard,” he said. “It’s soft and compactable, maybe because of the salt content.

“I would like you to make a good plan before you leave on how to make proper roads in the city.”

Nattaq added that the city must also work out strategies to retain staff in view of the Mary River project and a possible diamond mine near Iqaluit.

“We have to have Iqaluit standards for our roads,” Couture concurred. “So that when we do any project, we have it done with a methodology that we know it will last.”