“We will not be accepting direction from the Minister of Education” 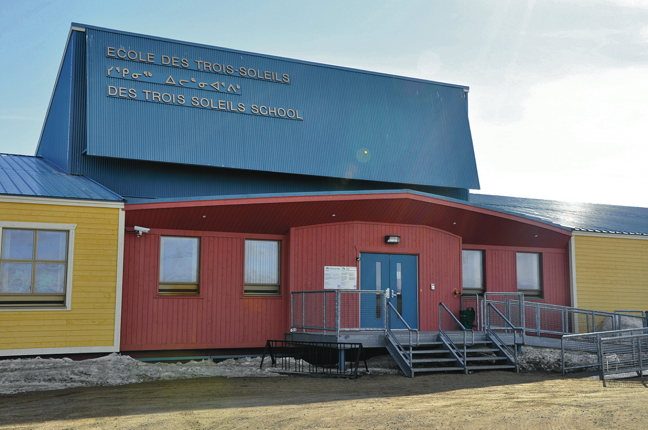 École des Trois-Soleils, Nunavut’s only French-language school in Iqaluit: the French school board wants more classroom space at Inuksuk High School and the Iqaluit District Education Authority says it wants the Nunavut Government’s education staff to stay out of those negotiations. (FILE PHOTO)

Iqaluit’s district education authority is telling the territorial government to butt out of negotiations between the community’s high school and francophone school over classroom space.

The Commission Scolaire francophone du Nunavut (CSFN), which oversees just one school—École des Trois-Soleils—already has an agreement in place with Inuksuk high school to use classroom space to deliver its Grade 10 to Grade 12 curriculum.

This year, Trois-Soleils has asked for additional space at the high school for students in another grade.

In a Sept. 9 release, the Iqaluit DEA said it’s working to reach an agreement with the CSFN.

“Eventually this negotiation process will produce a viable compromise,” the DEA said.

“Regrettably, the Minister of Education has sent a number of letters to the IDEA interfering with negotiations and ordering the IDEA to accept the terms offered by the CSFN,” the authority said in the release.

“We will not be accepting direction from the Minister of Education in an area which is clearly the IDEA’s responsibility.”

With a small but growing population of about 100 students, Trois-Soleils has had to look elsewhere for space to house its high school classes as its secondary-level programming expands.

Last year, only about 40 per cent of classes in Trois-Soleils’ Grade 10 to Grade 12 program were offered in French.

A lack of funding to build new infrastructure to house its own curriculum prompted the CSFN and a local parent to file a lawsuit against the GN, citing its minority language rights under Section 23 of the Charter of Rights and Freedoms.

In the meantime, Trois-Soleils has partnered with Iqaluit’s only other high school.

The IDEA notes that, like DEAs across Nunavut, the organization controls its own space in schools, and works with the community to determine how the space is used. The territory’s Education Act allows DEAs and the CSFN to make agreements for the exchange of students.

In the case of CSFN’s request for more space, the proposal is fully funded by that school board and the DEA said that does not include any new teaching resources for Inuksuk high school.

“Our allocations of teachers and funding are designed to support students registered and funded with the IDEA. If we had space and resources, our first priorities would be to enhance programs for IDEA students.