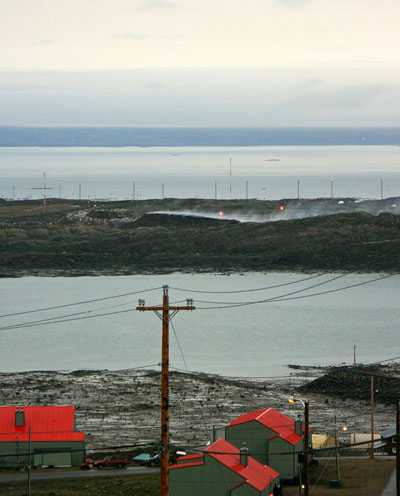 Iqaluit’s dump fire throws off steam on a wet evening Aug. 6 opposite Koojesse Inlet from the city. Firefighters promise to throw a whole lot more water on the smouldering heap when an extinguishing plan begins in late August. (PHOTO BY PETER VARGA)

The City of Iqaluit took its first step towards covering costs needed to douse the smouldering dump fire, Aug. 6, when city council identified $2 million of municipal funds to cover part of a fire-extinguishing plan.

Contrary to what the Government of Nunavut claimed in a public letter sent to the city, Aug. 1, Iqaluit doesn’t have $7.5 million of “unrestricted reserves,” free to use in an extinguishing plan, city administrators said.

Reporting on the city’s analysis of means to pay the full cost of a dump-dousing plan, estimated at $3.3 million or more, Coun. Stephen Mansell, chair of the city’s finance committee of the whole, told the committee Aug. 6 that the city actually has only $4.4 million of “unencumbered reserves” available to fund the plan.

But “to remove $3 million out of the identified $4.4 million tonight would be a severe blow to our reserves, and I feel it would be unnecessary,” Mansell told councillors at the finance committee meeting.

Until the dump-dousing plan gets underway and the city gets a clearer idea of what the true costs of dousing the fire are, Mansell proposed the city immediately pull just $500,000 out of the reserve – a sum the city has already spent to draft a dump-dousing plan.

City administrators found that the territorial government overestimated the city’s reserves at $7.5 million, because officials at Community Government and Services failed to recognize the city’s financial obligations under the aquatic centre project, and money set aside for emergency repairs to water and sewer lines.

“We’ve identified money that we feel should not be moved,” Mansell told the finance committee. “This includes money tied up in the aquatics loan, as well as money for emergencies and dedicated funding.”

On Mansell’s advice, council agreed to draw $500,000 from the unrestricted reserve by taking 11.35 per cent for each item listed under the $4.4 million.

The councillor and finance committee chair also identified a second immediate source of funding for the dump-dousing plan — an offer from the Government of Nunavut to advance $1,575,011 of funding owed from equalization payments and a water sewer subsidy, noted in the Aug. 1 letter to the city.

“These funds are money that is already due to the city, but they would be advanced early, on an interest-free basis,” Mansell said.

Council also agreed to take up the GN on this offer.

Motions to accept both the government’s sped-up cash advance and the draw from reserves sailed quickly through back-to-back meetings of council’s finance committee of the whole, chaired by Mansell, followed by a special meeting of city council chaired by acting mayor Mary Wilman.

Both funds taken together amount to little more than $2 million of the minimum $3.3 million cost that the city’s fire department projected for the dump-dousing plan.

“This gives us more time to explore other options to fund the dump plan as costs become clearer, Mansell said.

“We haven’t put off opening up the current budget and identifying savings there as well.”

The fire department’s $3.3 million projected cost is “an approximation with a contingency,” he said, adding that council will probably renew its call for help from the territorial and federal governments “if it costs more.”

Fire chief Luc Grandmaison said that the fire department does not have a clear idea of how severe the dump fire is.

Although firefighters have successfully limited the blaze to a single pile at the dump, he referred to the heap as a “mountain of garbage,” containing a deep-seated fire up to “15 metres below ground.”

As council lines up funding, the city’s fire department and public works are preparing the site around the dump for the dousing plan.

Grandmaison said the fire department and dump-extinguishing specialists would not start firefighting work “until probably the 18th or 20th of August, if all goes well.”