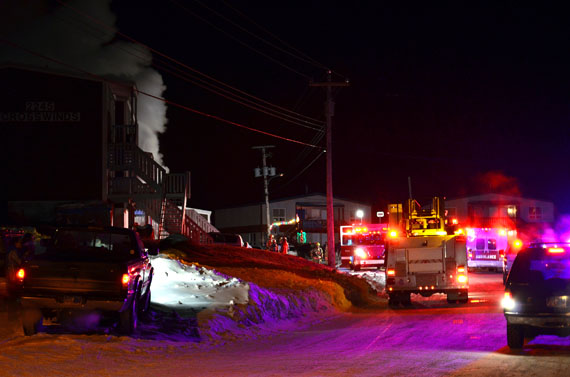 Iqaluit firefighters and other emergency responders work on a fire that broke out around 2:10 a.m. Dec. 21 at building 2245, a 17-unit apartment complex. The blaze damaged three apartment units and multiple families have been left homeless. (PHOTO COURTESY OF AARON WATSON)

In the early morning hours of Dec. 21, Iqaluit firefighters quelled two fires, one of which left “multiple families” homeless, the City of Iqaluit said.

The first broke out around 2:10 a.m. at building 2245, a 17-unit row of apartment units near the Apex Rd. Quickstop store, called The Crosswinds.

Alarms triggered by working smoke detectors alerted tenants, all of whom managed to escape the building, the city said.

Three apartment units were damaged, but no one was injured.

The Iqaluit RCMP said the cause of the fire is not known and that the fire marshall will do an investigation after it’s safe to enter the building.

Later that morning, firefighters, an ambulance crew and RCMP responded to a second fire that started around 6 a.m. Dec. 21 at building 2455.

Alerted by a smoke detector, all occupants escaped and no one was injured.

Firefighters doused the second fire in about half an hour. The cause is still under investigation, police said.