City of Iqaluit enjoys some successes, but public criticism lingers 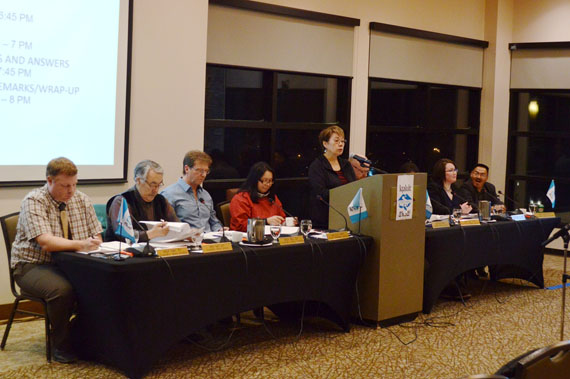 Eva Aariak, the former Nunavut premier, acts as emcee for a town hall gathering at the Frobisher Inn this past Nov. 3, organized by Iqaluit City Council. (PHOTO BY STEVE DUCHARME)

Almost a year to the day since being sworn into office, Iqaluit Mayor Madeleine Redfern says the work she’s done so far goes a long way toward addressing the concerns city residents have about the dire state of affairs inherited by Iqaluit’s current city council.

“We know that you had high hopes and expectations for your city in this term,” Redfern said, flanked by city councillors before an audience of about 50 people gathered at a special town hall held Nov. 3 at Iqaluit’s Frobisher Inn.

“This year, we have worked hard to address some of the concerns that the residents have expressed.”

Redfern touted the development of the city’s first comprehensive strategic plan since 2012 as the centerpiece of council’s inaugural first year, alongside internal re-organization within city administration and more prudent fiscal management than in the past.

“The completion of our strategic plan will guide us in the future to ensure we can develop a prosperous and bright community,” Redfern said of the plan, which will be released to the public “in the new year.”

Deputy Mayor Romeyn Stevenson repeated council’s promise to eliminate the city’s general funds deficit by 2018, after the release of second-quarter financial statements that show some signs of recovery.

“We’ve moved from a place of significant financial instability to a place that’s firmer, headed in the right direction,” Stevenson said.

Construction of the city’s $40.5 million dollar aquatic centre is also proceeding on time and on budget, Coun. Jason Rochon announced, with an opening date set for some time in January.

Other developments cited by councillors include the $26.5 million in federal funding granted in September to update the city’s wastewater treatment plant, the successful renewal of the city’s four-year-old expired water license, and the exodus of more than 30,000 tonnes of scrap metal, tires and vehicles from the city’s landfill.

But while most of the town hall attendees thanked Redfern and credited city council for their public accountability, several questions from the audience hinted at the growing tensions between the City of Iqaluit and its employees—who are currently locked in bitter negotiations over a new collective bargaining agreement.

The outgoing languages commissioner, Sandra Inutiq, delivered a scathing anecdote to Redfern and council members about her life as wife to an Iqaluit firefighter, whom she claims is overworked and suffering from the effects of “a toxic work environment.”

“In the 17 years he’s worked full time, this is the most I’ve seen him stressed out,” Inutiq said, who claimed some Iqaluit firefighters are suffering from post-traumatic stress disorder due to the large volume of non-fire related emergencies they attend to such as suicides, murders and other violent acts, with little support.

“The morale is crushed and the community that used to exist amongst firefighters is no longer there.”

Inutiq estimates that Iqaluit’s 17 full-time firefighters are working 300 overtime hours annually, with a staff turnover of about one-third every year and a shortage of volunteers.

“[Iqaluit’s] schedule was changed with a statement that it would save costs,” Inutiq added, but said some employees within the department had unofficially costed-out the new schedule and found the city has paid $80,000 more over the last six months compared to its previous schedule.

Redfern responded that the scheduling issues are currently being discussed in the city’s negotiations with its unionized workers, but could not comment further.

“The council does get updates, but we are not the bargaining team… We are limited to what we can say because of the collective bargaining process,” she said, promising that council would focus on staffing and human resources in the upcoming year.

Another resident, who identified himself as a resident of Iqaluit for 12 years, asked if councillors understood why city employees are leaving their jobs and if administrators do any exit interviews.

Redfern said she recognizes that the city needs to “ensure people have the support, qualifications, training development and opportunities to advance.”

“We are working very hard to increase staff positions that are currently vacant, because they can [affect operations],” she said.

“HR [human resources] is our next priority, we’ve been focusing this past year a lot on finances. We recognize that we need to do a lot of things at the same time.”

Iqaluit’s human resources director, Robyn Mackey, later confirmed that the city has begun doing exit interviews and “we had done some prior.”

In her closing remarks, Redfern promised similar town hall-style updates from council on an annual basis, but called on Iqaluit residents to attend council meetings and to communicate with their representatives.

“We remain accessible, not just in these town halls,” she said.

“If we haven’t worked on an issue, you’re more than welcome to come back and grill us again, to say, ‘Why did you commit to something and didn’t do it.’”