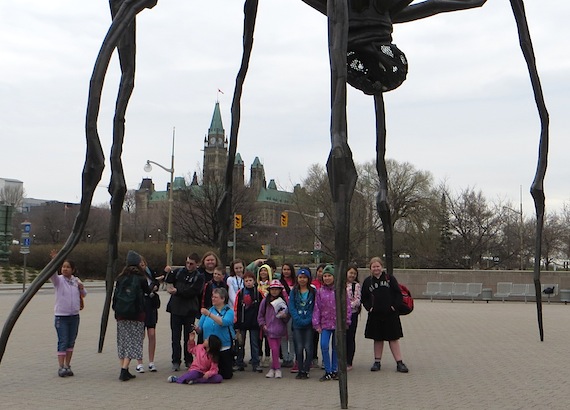 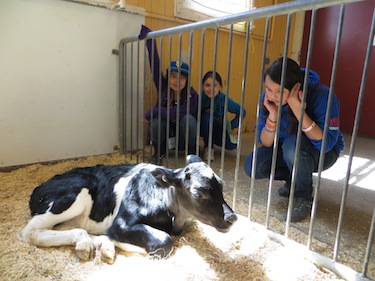 Maria Nooshoota, Grace Nowdluk and Grace Salamonie get up close and personal with Kasha at the Agriculture Museum in Ottawa. (PHOTO COURTESY OF C. MARSHALL)

Members of Iqaluit’s Fiddle Club have been on the go — last week, they headed for a music exchange program in Ottawa, where they also performed as part of the National Arts Centre’s orchestra.

The Iqaluit youth arrived April 23 in Ottawa where they greeted by 15 members of OrKidstra, the “community development through music” program for Ottawa’s inner-city children.

The Iqaluit Fiddle Club joined forces with OrKidstra musicians for workshops and rehearsals that resulted in two April 27 performances with the NAC orchestra during the two “Adventures in Canada’s North” concerts, which were part of the Northern Scene festival now underway in Ottawa.

The Ottawa trip marks the second part of a cultural exchange organized by the YMCA Youth Exchange Program.

Activities for the group on their visit to Ottawa also include a scavenger hunt in the Byward Market, a visit to the Museum of Nature and to the Experimental Farm and a walking tour of downtown landmarks.

And, before the Iqaluit students come back home, they will also have toured Parliament Hill and sat in on question period as a guest of Paul Dewar, MP for Ottawa Centre.

Community service is also part of the exchange: at St. Luke’s Anglican Church, they participants will prepare, serve and entertain at a supper for people in the church’s meal program.

This past March, the OrKidstra group from Ottawa visited Iqaluit for music workshops, performances and cultural activities.

The Ottawa youth were introduced to dog sledding and soccer on sea ice, throat singing, a visit to the original Hudson Bay trading post, a visit to the legislative assembly, the Nunavut Research Institute and elementary schools.

They also played two concerts alongside the Iqaluit Fiddle Club: at St. Jude’s Cathedral, for which they raised $835, and in the Aqsarniit Middle School auditorium where they accompanied 200 community singers at a fundraiser for the Iqaluit Musical Society.

Olivia Pelling, an Ottawa-based luthier, also travelled to Iqaluit with the OrKidstra musicians, and shared her expertise in building and repairing string instruments with kids who were keen to learn luthier skills.

Some of the youth from Ottawa said they learned a lot while they were in Iqaluit, including “learning how to throat sing was awesome and I beat my partner,” according one participant quoted in a recent news release from OrKidstra.

“I learned that the best thing to do is to be around people that care or respect you, and the way to be around caring people starts with your hobbies,” said another participant.

The YMCA Youth Exchanges Canada program’s goal, funded by the federal government, is to promote cross-cultural awareness and a sense of belonging among Canadian youth aged 12 to 17.

Founded in 2007, OrKidstra is a “community development through music” program that gives free music training and instruments to 200 children aged five to 16 from 38 linguistic backgrounds in the Centretown and Lowertown areas of Ottawa.

It’s based on the principles of Venezuela’s El Sistema music program, which has become a global model for music programs.

That program teaches music to 300,000 of Venezuela’s poorest children, “demonstrating the power of ensemble music to dramatically change the life trajectory of hundreds of thousands of a nation’s youth while transforming the communities around them,” El Sistema’s website said.

The Iqaluit Fiddle Club, following similar principles, provides children and youth in Iqaluit with a chance to learn the social skills needed to make music together.