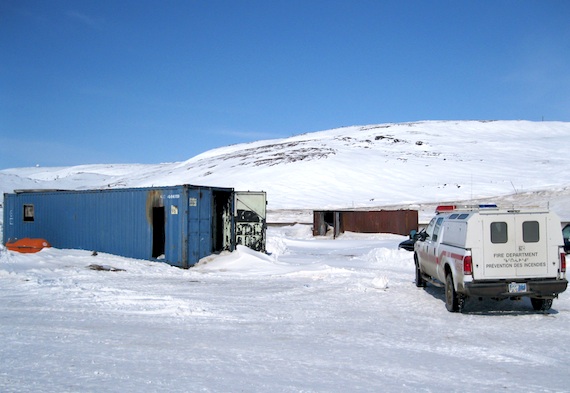 The Iqaluit Fire Department is set to upgrade its firefighter training grounds at the end of Federal Road. The facility’s two sea cans, dating back 15 years, fall well short of the department’s growing requirements. The department is looking to purchase four sea cans for the first phase of its upgrade, to be completed in September. (PHOTO BY PETER VARGA)

Thanks to a grant from the city earlier this year, the Iqaluit fire department can start on a long-overdue upgrade to its training grounds — the first step: the purchase of four more sea cans for new search-and-rescue simulation facilities.

A $70,000 grant from the city means the department can kick off its plan to bring its training grounds up to standards that suit the territorial capital, said acting Lieut. Matt Edmunds, who heads up the firefighter committee in charge of the upgrade.

“The training facility we have now is inadequate,” said Edmunds.

Right now that consists of only two sealift containers at an industrial area near the airport.

Edmunds said the site “is kind of scary, from our point of view – that that’s all we have to train in.”

The site as it stands has not changed since the fire department took on the lots in 2002 and moved the two containers there from the fire station.

But, with the continued growth of Iqaluit, the department’s call volume is increasing rapidly.

“Our fires are increasing annually, both in numbers and size of fires,” Edmunds said. “We need a new facility so we can upgrade our skills, and prepare for the next step.”

As it stands, firefighters can only practice on simulations of a “room and contents” fire, using the two 15-year-old rusted and charred sea cans.

This year’s plan calls for the purchase of two 40-foot and two 20-foot containers, said Edmunds, which will be used to set up simulations for fires to a two-storey house.

Expansions for the following year call for added modules to simulate three and four-storey fires, as would occur in row-housing or office buildings.

“The calls we get [for fires] are unknown, in an unknown space, and we’re faced with unknown dangers going into either a residential house, or a commercial building, or industrial building,” Edmunds said. “So we want to be trained as up-to-date and as well as we can be.”

The training site’s first phase will be competed by September, he said.

This deadline will allow the Nunavut fire marshall to give a Level-1 firefighting clinic at the new facility that month for volunteers from other Baffin communities, including Pond Inlet, Igloolik, and Cape Dorset. The fire marshall will continue to use the grounds for other clinics, including Level-2 firefighter training and pump operation.

The new facility will be built on the current lot, an area of about 3,500 square-metres, which the fire department hopes to expand as well. A request to the city for a third lot is to be decided in May.

The city’s $70,000 was indispensable for the start of the project, Edmunds said, but further additions to bring the grounds up to the fire department’s requirements will cost $200,000 to $300,000 in total.

Once completed, the training grounds will include a burn facility, workshop, a water tanker, and areas for vehicle extrication, search and rescue, and equipment storage. The facilities will be built over several years, as financing allows.

“We want to make this a realistic goal, and we want to do it in small steps,” Edmunds said. “That just means doing a burn-house one year, another part next year, and so on.”

Members of the fire department look forward to the additions, particularly in view of larger fires it has had to deal with in recent years. Edmunds recalled the Creekside Village fire and four other incidents to whole structures in 2012 and 2013.

“Fires are getting more common and bigger,” he said. “It puts a big toll on us, for having our training up to par.”

“They need a structure to practice on,” he said, on top of other Baffin Island communities in fire marshall training sessions.

“What we’re going to do this year is going to grow very quickly.”