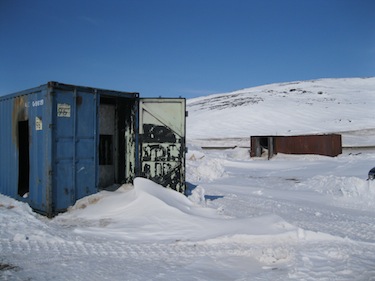 The Iqaluit fire department is set to expand and upgrade its firefighter training grounds in the city’s North 40 area, thanks to the city’s approval. Two charred sea cans and a few wrecked vehicles are all the fire department has had to work with since 2003. (FILE PHOTO)

The Iqaluit fire department got the city’s approval June 11 to expand its firefighter training grounds, with councillors approving a motion that helps clear the way for an upgrade to a facility where firefighters can train.

For now, the department’s training facility consists of nothing more than two sea containers, which is “kind of scary, from our point of view – that that’s all we have to work with,” firefighter Matt Edmunds, who heads up the firefighter committee in charge of the upgrade, told Nunatsiaq News in April.

“Our fires are increasing annually, both in numbers and size,” Edmunds said. “We need a new facility so we can upgrade our skills, and prepare for the next step.”

Iqaluit fire chief Luc Grandmaison was happy to make the next big step towards that facility at the June 11 council meeting, when the councillors approved the expansion of the training area to 6,476 square metres from about 3,500 sq. m.

Located in Iqaluit’s North 40 industrial area on Kakivak Road, the fire department has used the site since 2003, Grandmaison said.

But now the fire department and the Iqaluit Firefighters Association have laid out plans for the new facility there. These include an initial purchase of two sealift containers which can be used to simulate fires in a two-story house.

Future additions will include modules to simulate three and four-storey fires, as would occur in row-housing or office buildings.

A budget of $70,000 dollars from the city helped fund the start of the project. The firefighters’ association also plans to seek funding from other sources to cover the project’s total cost of $200,000 to $300,000.

City councillors expressed concern over the state of the site when they asked Grandmaison for details on the fire department’s plans.

“It’s a mess,” said Coun. Terry Dobbin. “There’s vehicles smashed up right, left and centre out there.” The city has an “unsightly dwelling” bylaw, he noted.

“As a city, we should be setting an example for the citizens of Iqaluit. Do you plan on removing the vehicles out there?”

Grandmaison responded that dead vehicles on the fire department’s lots are used for training purposes, but agreed that some will have to be hauled out.

“The new plan is to have a few vehicles at dedicated spots on the lots for training,” Grandmaison said, as in burn and vehicle-extrication exercises.

“We’ve been hauling cars in the past, but lately we have not been managing it and you’re right, I would engage myself to make sure that this is done properly,” he said.

Concerns shifted to long-term uses of the site, which is located closer to the city centre than many new neighbourhoods. In response, fire chief said most of the fire department’s installations at the training facility will be housed in mobile sea containers, all removable.

Asked about possible fire hazards to nearby buildings, Grandmaison said structures further than 50 metres from the site would not be in danger, as is the case.

Environmental concerns to the area centre around water analysis, he said, which will be reviewed by Nunavut’s environment department.

“I don’t think we’re contaminating the lot any more than it already is,” said Grandmaison, but “we would also like to work with the department of environment to analyze water upstream and downstream.”

The department of environment advised the fire department that they did not have any objections about the training ground area, but the two will meet to describe “what we burn, and how we’re going to burn,” Grandmaison said.

Highlighting the possible loss of tax revenue to the city by reserving the area for firefighter training rather than for commercial and residential development, John Hussey, the city’s senior administration officer asked about economic return and liability issues at the site.

On the first matter, Grandmaison answered that the site will host professional fire training drills by the Nunavut Fire Marshal and be available for training by other fire-control agencies, which will generate revenues for the city.

On liability, Grandmaison answered that the biggest concern to the city is the loss of property and lives caused by lack of proper training for firefighting staff. Injury and loss of life is a danger firefighters also face, he said.

“You must train for any job to get the greatest from it,” he said. “To try to find something in the smoke and heat is risky. Every week in North America firefighters lose their lives. So I would say this is the greatest benefit from a liability perspective.”