Nunavut sports and recreation gets celebrity support from two groups 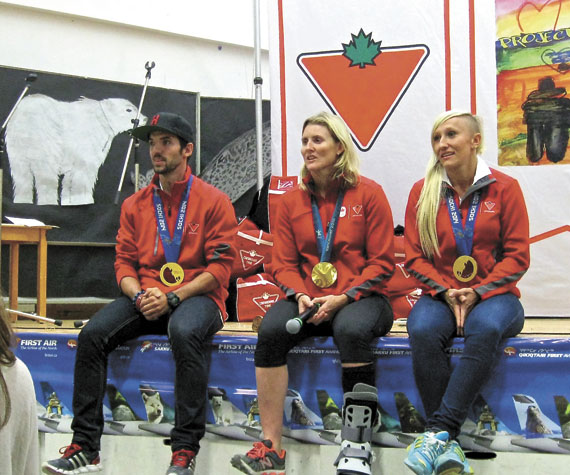 Canadian Olympic gold-medal winners Charles Hamelin, Hayley Wickenheiser and Kaillie Humphries take questions from kids and families at Nakasuk School in Iqaluit, Aug. 25, during an afternoon of events in support of sports and recreation in Nunavut. (PHOTO BY PETER VARGA) 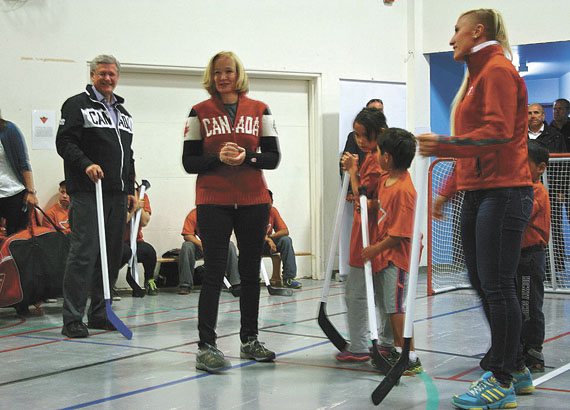 Laureen Harper lines teams up for the opening face-off of a floor hockey game at Nakasuk School in Iqaluit with her husband, Prime Minister Stephen Harper, left, who joined in the play. The quick game concluded an afternoon of activities, Aug. 25, in support of sports and recreation. (PHOTO BY PETER VARGA)

A visit from three Olympic gold medalists seemed like enough star power for a day.

But that wouldn’t quite do at Nakasuk School in Iqaluit, Aug. 25, when Prime Minister Stephen Harper stopped in to lend a hand at an afternoon-long promotion of sports and recreation for youth.

The prime minister’s short appearance marked an added highlight to two events put on by Canadian Tire Corp. in the name of its Active at School program.

Harper stopped in late in the afternoon, shortly after arriving in Iqaluit during his week-long tour of northern Canada.

His mission: a quick game of floor hockey with the kids and athletes.

Canadian Tire Corp. organizers led off the day with a first event promoting its Active at School program, which challenges schools to set aside one hour a day for sports and recreational activity.

Founded by the corporation, the program draws support from more than 80 organizations across the country.

A second announcement followed later that afternoon. The corporation teamed up with Project North, a non-profit known for donating hockey equipment to Nunavut youth who can’t afford it, to donate 100 bags of hockey for such kids in Iqaluit.

The big donation marked a milestone for Project North, which has donated sports equipment for kids throughout Nunavut since 2009.

“When we go into a community, we usually donate 25 to 30 sets of brand new hockey gear,” said Michelle Valberg, president and co-founder of Project North.

As honorary chair of the non-profit, Laureen Harper drew Canadian Tire Corp. into the project.

“This is about two years in the making,” said Valberg.

The donation is Project North’s first for kids of Iqaluit, which is the 15th community to receive from the non-profit. Donations over the years now amount to more than $500,000 in new and used hockey equipment deliveries, she said.

The 100 recipients of the bags were to be decided by the City of Iqaluit’s department of recreation and the Iqaluit Amateur Hockey Association.

“They’ve shipped all the equipment up for us, and they’re the reason why Project North has gotten to this point,” she said. “Without them I don’t think we ever would have had the legs to continue.”

Canadian Tire’s involvement through Active at School takes the project to another level.

“Before, this was just a little organization and we would only bring up 80 bags a year,” Laureen Harper said.

“We are thrilled,” she said, pointing to the added attraction of Olympic athletes at the event. “We couldn’t do more.”

Active at School grew out of concerns that Canadian youth are more inactive today than ever before in the country’s history. At the same time, expenses for recreational activities and sporting equipment have grown, Harper commented.

“Here (in Northern Canada) everything is a lot more expensive,” she added. “This just helps, and it leaves the parents up here with that little bit of extra money they could put to other things.”

Stephen Harper’s quick game of floor hockey with the star athletes and kids was just long enough for a few goals and high-fives, followed by a few photos. Then he was off again.

“When he was a kid, he played a lot of street hockey,” Laureen Harper commented as the afternoon’s events wound down. “So it wasn’t hard to convince him to come over.”