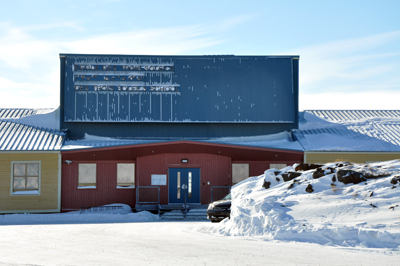 Nunavut’s French-language school board and its only school, École des Trois-Soleils, pictured here, say that Iqaluit’s District Education Authority denied a request to accommodate its four grade 9 students in classroom space at Inuksuk high school. The students eventually dropped out of Trois-Soleils to enroll at Inuksuk school. (PHOTO BY SARAH ROGERS)

Nunavut’s French-language school board says that, for a third year running, no Grade 9 students will be enrolled at the board’s only school in Iqaluit, École des Trois-Soleils, even though accommodating them right now will not require the use of extra space at Inuksuk High School.

But it’s not for lack of interest or enrollment: The problem stems from the francophone school board’s lack of space at its own school for its secondary program, said Luc Brisebois, the chair of the Commission scolaire francophone du Nunavut.

And that’s a problem made worse by an ongoing disagreement with the Iqaluit District Education Authority and the Government of Nunavut’s education department, he said.

In recent years, the CSFN and the Iqaluit District Education Authority (IDEA) have had an agreement that allows Trois-Soleils Grades 10, 11 and 12 students and teachers to use classroom space at Inuksuk High School.

Trois-Soleils, a small school with a student population about 100, also has an agreement to use the gymnasium at nearby Aqsarniit middle school.

The four students have since dropped out of Trois-Soleils and enrolled in Grade 9 at Inuksuk, Brisebois said.

“It’s a really critical time in students’ lives,” he said.

“The Grade 9 English stream at Inuksuk has better infrastructure, which offers them a better program. But we’re losing those students.”

Brisebois said the CSFN hadn’t even asked for additional space or resources; it planned to put the Grade 9 students in the same space as the Trois-Soleils Grade 10, 11, and 12 students, a group smaller than 10 students.

“So we have trouble understanding why the Grade 9 students are being denied access,” he said.

The discussion around access to that space has now grown into a three-way spat—partly a legal one—between the school board, IDEA and the GN.

After the IDEA initially denied the space to the CSFN in June, Brisebois said Nunavut’s education minister Paul Quassa intervened and confirmed in writing that Grade 9 students could in fact join Trois-Soleils’ program at Inuksuk for September 2016.

But earlier this month, Brisebois said the minister reversed his decision after the IDEA filed an injunction with the Nunavut Court of Justice to ban the Grade 9 students from Inuksuk.

Without a francophone high school, Brisebois says the IDEA may be concerned the CSFN will continue to request more and more space over the years to grow its program.

“We understand where they’re coming form, but we’re losing our students,” Brisebois said.

The IDEA and the GN’s education department have yet to respond to Nunatsiaq News requests for comment.

The IDEA has already made part of its position clear; the group put out a release earlier this month blasting the GN for meddling in an issue that it had no part in.

But Brisebois said the CSFN’s agreement is between the GN and the IDEA, so it’s the GN’s responsibility to ensure the French-language board has the resources it needs.

That issue prompted the school board to launch a lawsuit against the GN last year, citing its minority language rights under Section 23 of the Charter of Rights and Freedoms.

“It’s a right,” Brisebois said. “We’re in Canada, and when Nunavut was founded, French was made an official language. [The GN] needs to follow up on that.”

“We want [our own] high school wing built, but we can only build the school if we have the numbers,” he noted.

“It puts our entire school operation at risk.”