Construction to begin in spring 2014 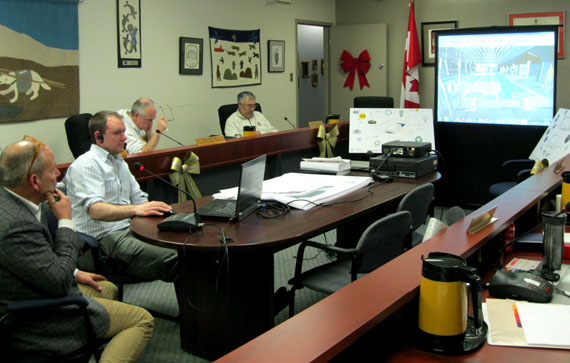 Iqaluit’s city council has given a green light to new $30.1 million aquatic centre, shown in this artist’s conception, to be located next to the city’s Arnaitok Complex. (COURTESY OF STANTEC)

Iqaluit’s plans for a $30 million state-of-the-art aquatic centre got the go-ahead Dec. 16, when city council approved the design and development permit for the new facility.

The aquatic centre will stand next to the city’s multipurpose Arnaitok Complex — which includes city hall, the fire hall and Arnaitok Arena — by mid-2016.

Described by the city’s chief administrative officer, John Hussey, as “the biggest single project” the city has ever taken on, the centre will include a six-lane 25-metre pool with a diving board, a leisure pool with spiral water slide, a whirlpool, saunas and a fitness centre that will take up almost one-third of the recreational facility.

In a presentation that included some virtual 3D imagery, Armstrong described a three-storey-high facility with two floors, elevated above the ground by “two to three feet” with steel piles.

The facility’s ground floor houses a fitness centre with an equipped gym and open space for aerobics and other classes.

A broad hallway links the two entrances on either side of the building, front and back, and includes space for an elders’ room, a store and concession stand.

Placing the pool on the second floor is a “big move,” Armstrong said, and the result of designing a structure elevated from the ground — which is best suited to Iqaluit’s Arctic environment.

“You’re going to have a building with free air running underneath,” he told councillors. “That keeps permafrost frozen, lets the snow go through, and keeps the snow away from the building.”

The facility will stand on some 220 steel piles, drilled down past the permafrost into solid rock.

The building’s elevation is one of many features geared to suit it to Iqaluit, Armstrong said. Others include a curved roof, aligned with prevailing winds, and windows positioned to maximize intake of sunlight.

Other features include a ventilation system that circulates fresh air through the building, and a “district heating” system that could save on heating bills, Armstrong said.

Designers pegged the final cost of the project at $30.18 million. An extra construction contingency of $1.81 million would account for uncertainty in market rates “between the time of this [council decision] and construction,” Armstrong said.

The facility’s gym on the ground floor of the aquatic centre will replace of the Atii Fitness Centre by a special arrangement, according to Amy Elgersma, director of recreation for the city.

Elgersma explained that Atii, run as a “non-profit society,” agreed to close their gym near the airport, and join a city-run public facility once it opened.

As part of the agreement, Atii was also involved in drafting the designs for the new gym at the aquatic centre, Elgersma said.

Even though many city councillors were guarded about the costs of the new aquatic centre, all supported it except Coun. Kenny Bell, who held out for that reason.

“As good as this pool is, it is still way too expensive for this city,” Bell maintained. “As long as our roads are failing, our sewage lagoon is failing, our landfill is failing — there’s just no way I could support it.”

“We’ve heard about the price being too high. However, we’re a capital city,” said Coun. Simon Nattaq. Once the city’s population reaches “the 10,000-mark, that’s a new thing for us,” he said, noting that a community that big, particularly the territorial capital, needs such a recreational facility.

Coun. Joanasie Akumalik said that a swimming pool, which the city has been without since October 2012, is needed to host certain training programs, such as for the fisheries.

Construction is expected to begin in spring of 2014.