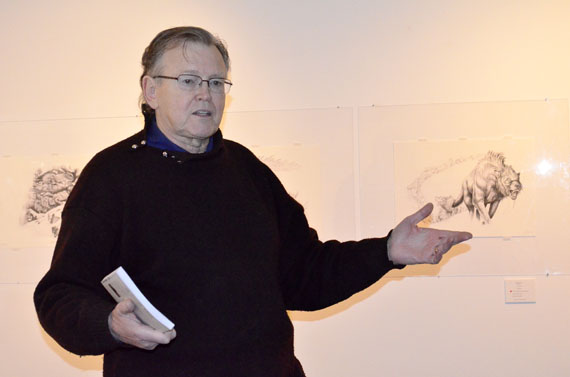 Iqaluit historian Kenn Harper speaks to a group of about 60 Iqaluit residents who attended the Feb. 8 launch of his new book, In Those Days, at the Iqaluit museum. (PHOTO BY JIM BELL)

After many years of sharing untold stories about the Arctic in print, Iqaluit historian Kenn Harper has put some of his best into a definitive collection.

In Those Days: Collected Writings on Arctic History, draws together some favourites from the author’s weekly column Taissumani, which just started the 10th year of its long run in Nunatsiaq News.

“People have been suggesting to me for years that I compile the columns into a book,” Harper said at the launch of his book, Feb. 8 at Iqaluit’s Nunatta Sunakkutaangit Museum.

The project finally saw the light of day thanks to a suggestion by the publisher, Iqaluit-based Inhabit Media — to create a series of books out from his columns.

“They thought the first one should be Inuit biographies, because we all like to read about people,” Harper said.

The book’s title takes its name from the column, Taissumani, which best translates to “in those days.”

Drawn from the first four years of Taissumani, which has appeared online and in print every week since the start of 2005, In Those Days is a collection of more than 25 short biographies of Inuit who played key roles in the history of the Arctic.

All led eventful lives, bridging the gap between their own world in the Arctic and that of explorers from points further south, from Europe and the rest of the world.

One is the brief story of William Ouligbuck, in the late-19th century. The multilingual Inuk interpreter had a rare gift for languages that included an understanding of many Inuktitut dialects, the Cree and Chipewyan languages, English, and possibly French, Harper said.

As interpreter for the British Arctic explorer John Rae, Ouligbuck revealed the first concrete news of the ill-fated Sir John Franklin expedition to the Northwest Passage.

Harper describes how the Inuit couple travelled widely, first taken to England by British explorers, where they met Queen Victoria, then to the U.S. and across the Arctic with Hall and his expeditions.

To this day, various geographic features in South Baffin are labelled with Inuktitut versions of Hannah and Joe’s names. Their English names would even appear in the north of Greenland, where they identify two islands.

“I’ve written about a half-dozen stories on them (Hannah and Joe),” Harper said. Like all the book’s biographies, the author brings the characters to life, based on historical records.

His hope is that readers build “an appreciation for the role that some Inuit historically played in the early exploration and our knowledge of the Arctic,” Harper said.

Stories are not limited to the Canadian Arctic. They also include Greenland and Alaska, “and the role that Inuit played as facilitators for the explorers, whose names we generally know,” Harper said.

“But the Inuit names, we don’t know. And I think it’s time we did.”

Harper, 68, said his columns have found a global audience, thanks to their appearance online. Even so, his intended readers are people who live in the North, just as they have been for most of his life.

Harper’s own half-century of life in the North has included careers as a businessman, teacher, and municipal affairs officer, he said, but his love of northern history, historical research, and recounting unknown stories is a constant.

“I’d rather write about things that everybody doesn’t know already,” he said.

It’s not uncommon, he said, that Inuit readers would recognize their great grandparents in his work.

“That’s the biggest gratification, is knowing that northerners – for whom I’ve learned, and among whom I live, appreciate the stories.”

As the book’s subtitle “Inuit Lives – book 1” suggests, In Those Days is the first of a series of collections by Harper that Inhabit Media plans to publish. Other books in the series will focus on different themes that run through his Taissumani columns.

“Kenn is one of the few northern authors who have international recognition,” said Neil Christopher, co-owner of the Iqaluit-based publisher.

That recognition comes from Harper’s best-known book, Give Me My Father’s Body: The Life of Minik, which Harper first published independently in 1986. The book met wider acclaim after Steerforth Press published it in the United States in 2000.

Like his columns, that book is a work of popular history, which tells the story of an Inuk man who bridged two worlds.

Harper’s first collection speaks “to so many people” in the North, Christopher said. “It’s a piece of their own personal history.”

In Those Days: Collected Writings on Arctic History is on sale at Arctic Ventures in Iqaluit, and online through major Canadian and U.S. booksellers.