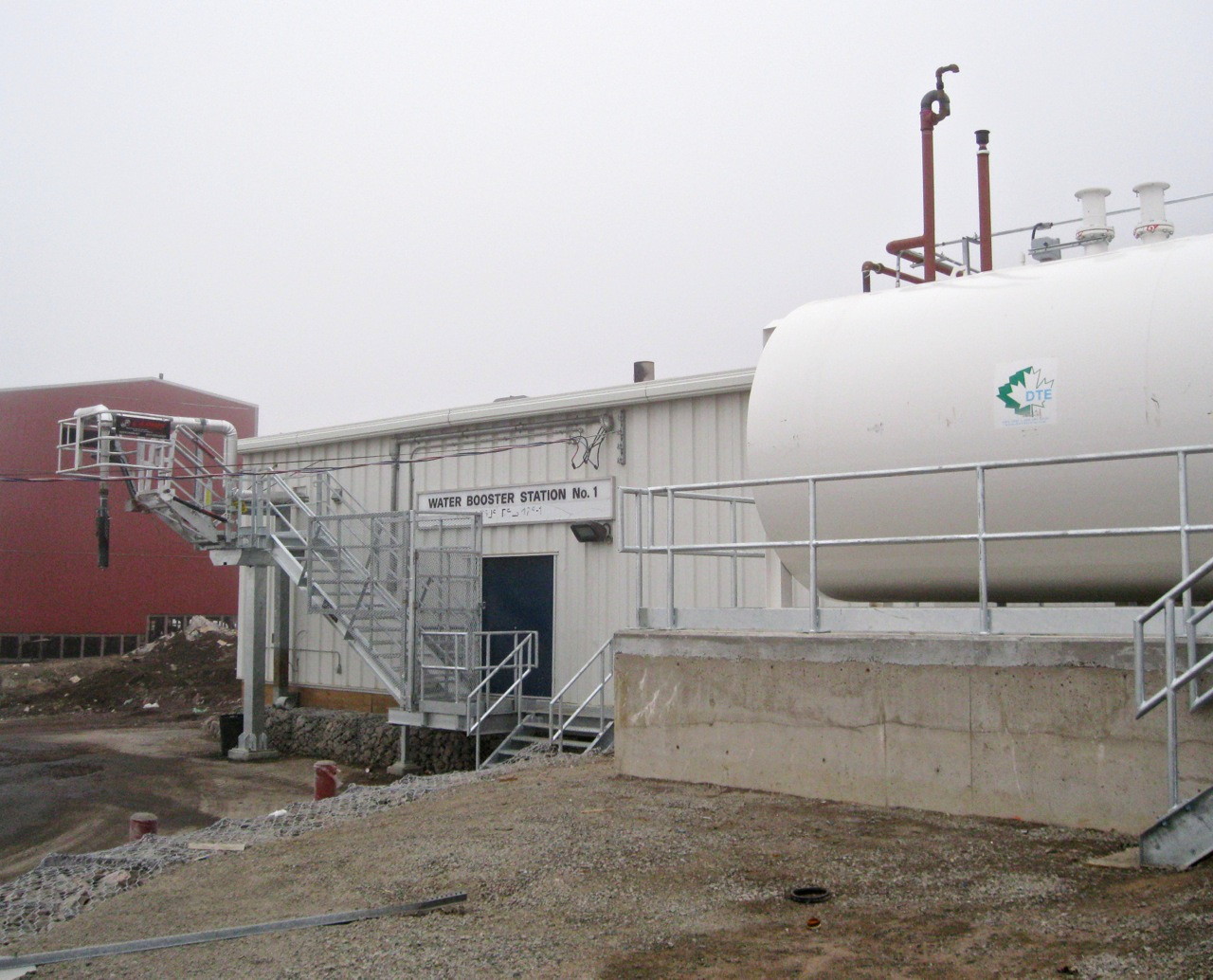 The city of Iqaluit’s water booster station, pictured, feeds the city with water which meets federal and territorial government standards, but the wastewater flowing out into Koojesse Inlet does not. The city must upgrade its sewer and solid waste facilities to renew its water license, which expired in 2012. (PHOTO BY PETER VARGA)

Iqaluit’s water license expired two years ago, but the city says it’s working hard to renew the permit in response to repeated warnings from Aboriginal Affairs and Northern Development Canada.

“As of today, we have submitted all our required documents to Environment Canada and Aboriginal Affairs and Northern Development Canada,” the city’s acting director of engineering, Paul Clow, reported to city council May 27.

Clow’s report to council came as welcome news, especially after a meeting Jan. 14, until now unknown to the public, when federal officials spoke behind closed doors to councillors.

Enforcement agents from Aboriginal Affairs and Northern Development Canada stopped in at city hall that day to warn council — at an in-camera session closed to the public — that the city had repeatedly failed to address a series of warnings the federal agency had sent over the previous two years.

“We were dumbfounded, basically, when Aboriginal Affairs came and made us aware of those letters,” said Coun. Terry Dobbin. “I really didn’t appreciate not knowing what was happening.”

Dobbin referred to letters addressed to John Hussey, the city’s chief administrative officer, who did not inform him of the warnings.

Coun. Kenny Bell said he didn’t know about the letters either.

“No updates from anyone, until we got these letters — basically threats from the feds saying — you either do this, or else,” Dobbin said, referring to financial penalties.

By March, the city finally worked out an arrangement with Aboriginal Affairs along with Environment Canada to bring its waste water and sewage disposal into compliance with territorial norms, Clow said.

Those territorial norms are set by the Nunavut Water Board, and enforced by AANDC.

The agencies gave the city a list of actions to complete, which the city promised to fulfill as soon as possible.

Included among them are an upgrade to the city’s wastewater and sewage treatment plant to a required “phase two” level, Clow said, which will take about four years.

“We provided Environment Canada a letter that stated that we’re coming into compliance with the regulations by December of 2018.” Clow said.

“They’re happy to agree with that, as long as we continue to move forward.”

To keep things moving, Clow said the city’s department of engineering committed to meeting with the federal agency four times a year, as of March 5, to report on the city’s progress towards the wastewater treatment upgrades.

“We’ve been providing them with quarterly reports,” he said. “Environment Canada and AANDC have been pleased with our progress to date, and we’re continuing our quarterly meetings to ensure the city is moving forward in completing the required projects.”

The next meeting is scheduled for June 13. Plans for the design and construction of the city’s new sewage treatment plant will begin this summer, Clow said, under a new full-time director of engineering.

Clow, who is the department’s project officer, is covering the position until the end of the month.

The city has already applied for a new water license, Clow said.

The license also covers terms and conditions of the city’s solid waste management plan, in addition to water and waste water management. The application must meet the approval of the Nunavut Impact Review Board.

“We’re in the process of getting all of those done, as soon as we can,” he added.

Dobbin noted that AANDC discovered high levels of “toxic waste” in waste water samples discharged from Iqaluit into Koojesse Inlet, and asked if the city has taken any immediate action to stop this.

“No upgrades have been done as of yet,” Clow replied, adding that the city would complete these in 2018, in compliance with standards set by Environment Canada.