“No one deserves that kind of treatment in our territory” 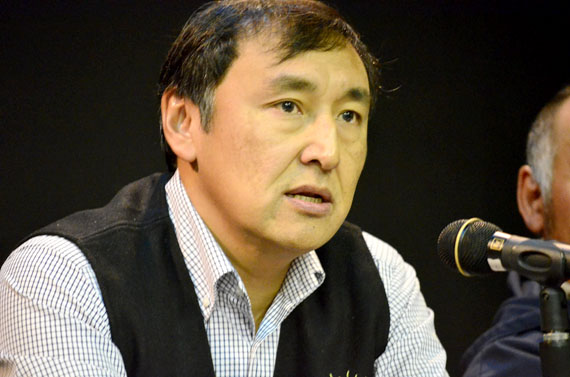 Iqaluit-Sinaa MLA Paul Okalik at an all-candidates meeting in Iqaluit last October. On March 7, he rose in the legislature to say he supports gay and lesbian people in the territory. (FILE PHOTO)

Okalik, who said he has lived through prejudice as a result of his Aboriginal heritage and been supported by the gay community, told the legislature that if he owned a tie with the gay pride colours on it, he’d wear it.

Speaking in Inuktitut during a member’s statement, Okalik said the issue has created “tension” in Nunavut.

On Feb. 12 Iqaluit city councillor Simon Nattaq disagreed with a rainbow flag being raised outside Iqaluit city hall during the Sochi Olympics.

Nattaq said the issue should have come to council first.

Nunavut Tunngavik Inc. president Cathy Towtongie commended Nattaq for speaking up on the issue at a Baffin mayors meeting March 5 and said in an email to Nunatsiaq News that she intended to “commend Simon Nattaq” for speaking up.

Speaking to Nunatsiaq News after the March 7 sitting, Okalik said everyone’s entitled to their opinion, but it’s “unfortunate some people hold those views.”

“As someone who has felt that type of discrimination, I have felt compelled that no one deserves that kind of treatment in our territory,” Okalik said.

Okalik said he felt discriminated against as an Inuk when he attended university in Ottawa.

“And the people who stood up for me were the gay and lesbian community. And I’m very proud for their stand in supporting my efforts,” he said.

Okalik said he’s “forever indebted” to the gay and lesbian community for this, and that he’s “honoured” to speak up about the issue on their behalf.

“When I see an issue like that, I feel compelled to respond and support the gay and lesbian community because they have been there for me in the past,” Okalik said.

In 2002, Okalik, then Premier of the territory, introduced Nunavut’s first Human Rights Act.

Heated debate ensued as some MLA’s opposed the inclusion of equal protection for gay and lesbian Nunavummiut.

Okalik was also one of the first in Nunavut to to support legalization of same-sex marriage in the country in 2005.

Okalik said he supports all Nunavummiut.

“As elected officials we’re here for everyone. We have to serve all our citizens regardless of their gender or sexual orientation,” Okalik said.

“And [I’m] doing the best I can to make sure that none of our community members feel discriminated or feel out of place in our territory.”