“We’ve got to start educating people” to pick up garbage, says Terry Dobbin 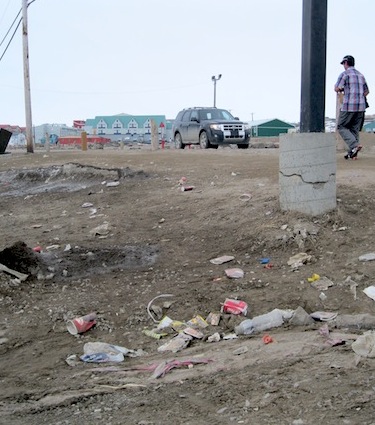 With the arrival of spring, litter and garbage have re-emerged from melting snow in Iqaluit, as shown here in Iqaluit Square in the city centre. City councillor Terry Dobbin says one-time spring clean-ups are not enough to keep streets and public places clean. (PHOTO BY PETER VARGA)

It’s time for Iqaluit residents to clean up their messy streets and keep them that way, says city councillor Terry Dobbin. If not, the territorial capital will fail to promote Nunavut and discourage visitors.

With the arrival of spring and snow melt, garbage and trash has re-emerged in streets and public places, as it usually does in May.

The problem now, said Dobbin, is that this is at odds with Nunavut Tourism’s strategy to promote Nunavut as an “unspoiled land” with “pristine waters.”

Speaking to city council at a regular meeting May 28, Dobbin said a recent Government of Nunavut video hardly shows anything of Iqaluit.

“Iqaluit is not really a clean city,” he said, pointing to cigarette butts strewn around the entryway of one hotel and a winter’s worth of litter spread around open spaces next to the city’s two big stores, Northmart and Arctic Ventures.

On top of promoting Nunavut at large, the capital city is touted as an Arctic centre for meetings and conferences. One such event this month by the Canadian Council of Transport Administrators drew more than 160 visitors from across Canada, he said.

According to Nunavut Tourism, said Dobbin, retail sales in some stores went up by “four times the average” during the conference.

“You’ve got Nunavut Tourism trying to promote the city as a meeting and conference centre, and you’ve got the GN (Government of Nunavut) promoting Iqaluit as a tourist destination. And yet our downtown core is a mess,” he told council.

“We’ve got to start educating people to start picking up garbage, and stop tossing it around wherever. We’ve got to educate construction companies to start cleaning up after themselves.”

City residents will have a chance to clear out their own household waste during Iqaluit’s community clean-up June 17 to 28.

Even though these present a chance to clean up the city, such an effort has to be consistent, Dobbin said.

Residents are asked to separate their garbage into wood, scrap furniture and metal scrap. Public works will collect the items at specific housing areas on each weekday. Check on the city’s website for more information.