“We need to do something before someone is fatally attacked” 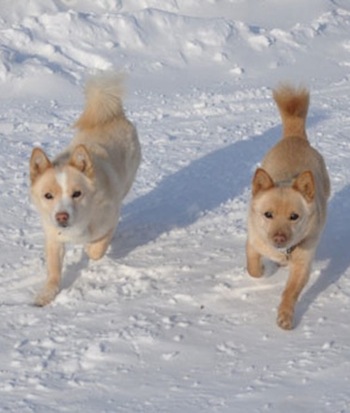 The review will respond to mounting complaints in recent months about loose and sometimes aggressive dogs roaming the community.

“This has been brought up on a number of occasions and we’re live to the issue,” Redfern said.

Iqaluit’s mayor was responding to a Feb. 28 presentation made to council by Apex resident and mother Kerry McCluskey, who says that she and her three-year-old son have had a number of recent “close calls” with loose or stray dogs.

“These dogs are dangerous and kids are terrified,” McCluskey told council. “I think we need to do something before someone is fatally attacked.”

McCluskey said Iqaluit faces two problems; one is abandoned and stray dogs who are hungry and poorly socialized; the other problem is due to owners who allow their dogs to roam freely.

“Tying up your dog isn’t an impossible task, and that’s why it’s so frustrating,” said McCluskey, a dog owner herself.

McCluskey suggested a number of solutions to Iqaluit’s dog woes, including a media campaign, mandatory spaying and neutering, or the use of dog culls.

The city’s domestic animal control bylaw already calls on dog owners to restrain their pets on and off personal property.

• households should have no more than three dogs each, excluding litters of puppies;

• bylaw officers are authorized to impound any dogs found loose, unlicensed or threatening or attacking other people/animals;

• bylaw officers are authorized to find new homes or destroy impounded dogs that are unclaimed after 72 hours;

Offenders will be fined, although dogs owners with registered dog teams are exempt.

McCluskey isn’t the first to approach the city to toughen up on loose dogs: Iqaluit’s Humane Society has also called on the city to rewrite its bylaw to mandate that new dogs be registered and either spayed or neutered.

Mayor Redfern says the issue has come up a number of times in recent council meetings.

She said the city is committed to working with the Humane Society as well as with the city’s new veterinarian, Dr. Leia Cunningham, the community’s first permanent animal care service.

City councillor Mat Knickelbein said a revamped by-law should place less emphasis on the city’s bylaw officers to take care of stray dogs, and instead get to “the root cause” of the problem: irresponsible dog owners.

“We have had our children mauled to death by loose dogs before – that’s a fact,” he said. “And we have to prevent this before it happens again.”

Councillor Mary Ekho Wilman said the number of complaints which the city has received about loose and threatening dogs is reason enough to speed up the review process.

“What we’re currently doing isn’t working to the extent that people want it to,” she said.